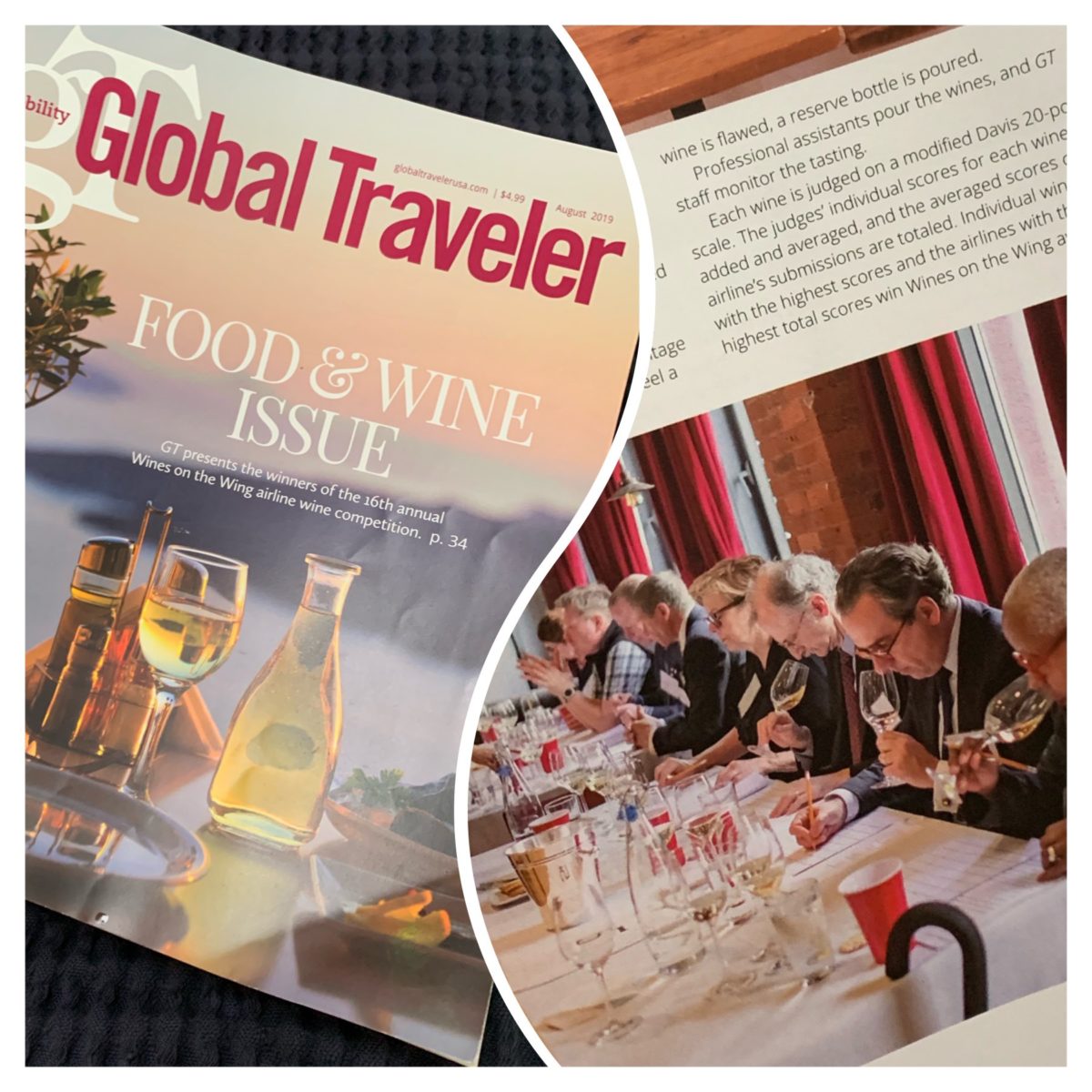 Just a few months ago, I was judging at the 2019 Wines on the Wing international airline wine competition, one of the world’s most respected wine award competitions for first class and business class on international flights throughout the world.

This year it was held at City Winery, New York back, along with twenty-three wine professionals.

To participate in Global Traveler’s competition, airlines throughout the world that operate long-haul international first-class service and/ or business-class service are invited to submit two white wines, two red wines and one Champagne or other sparkling wine currently on their wine lists, as well as the wine lists themselves. The same rules apply to our North America category, which includes airlines with first-class and/or business-class service beginning and ending in North America. All wines are coded and divided into flights, or categories, according to their type. For example, all New Zealand Sauvignon Blanc submitted would be judged together, as would all Rioja. Wines are presented to judges in code-marked glasses. Judges are told only the type of wine and, when appropriate (vintage Champagne, for example), the year. If judges feel a wine is flawed, a reserve bottle is poured.

The organization committee, which is chaired by my friend and colleague, Eunice Fried, tallies up the scores. American Airlines received the highest score among first-class international service for 2019.

“This award is a direct reflection of the investments we’ve made in the premium customer experience, and American is honored to be recognized by Global Traveler,” said Janelle Anderson, vice president, Global Marketing, American Airlines. “Together with our master sommelier, Bobby Stuckey, we focus on designing a wine list that will give our guests something new while also providing them with wines from their favorite regions.”

To achieve this honor, Bobby Stuckey and Intervine, the airline’s wine management partner, taste more than 1,600 wines from 16 countries each year. In total, the airline opens 1,320,000 bottles annually on its first- and business-class international flights.

“These prestigious awards give us the opportunity to showcase our innovative beverage portfolio,” said Linda Celestino, vice president, Guest Services and Delivery, Etihad. “Our boutique inflight cellar focuses on Old- and New-World wines with a range of both subtle and intense flavors, ensuring we offer wines to delight all palates.”

Singapore Airlines did remarkably well, with high-scoring wines in nearly every category. It ranked among the five top-scoring first-class airlines, while its Champagne and a white wine finished among the best in their categories. It is also one of the highest-scoring business-class airlines, its wines among the top Champagnes and red wines.

“Our commitment to the traveler is at the forefront of our in-flight wine program, and it gives us great pride to be named one of the top five scoring airlines in Global Traveler’s airline wine competition,” said Betty Wong, divisional vice president, Inflight Services and Design, Singapore Airlines. “We want to keep the palates of our frequent flyers excited with a new label delivered on board every few months. Our wine consultants source small-batch wines, many previously unavailable in flight. We are particularly pleased to see the fine showing of our Meursault and Château Tour Haut-Caussan wines.”

CESAR BAEZA is an oenologist and a consultant for the wine industry. A native of Chile, he studied winemaking there and in France, Spain and California and worked at several wineries. For 20 years he was wine master and co-owner of Brotherhood Winery in New York.

JOHN BRECHER is senior editor of Grape Collective. He and his wife, Dorothy Gaiter, were wine columnists at The Wall Street Journal from 1998 to 2010 and are also the authors of four books on wine.

J. SCOTT CARNEY, MS, is the dean of wine studies at the International Culinary Center. The center has schools in New York City and in Silicon Valley, California.

BETH COTENOFF, DWS, a senior vice president at R/West, has 20 years’ experience in wine and spirits. She worked in Paris and with Sopexa/Food & Wines from France. She earned the WSET diploma in Wine & Spirits and is a certified wine instructor.

JOHN FANNING is general manager of Hakkasan, New York. He has been wine director and/or general manager of other restaurants in New York including The Lambs Club, SD26, Accademia di Vino, Il Trulli, Beppe, Felidia, Coco Pazzo and Palio and in Rome, Bramante and San Michelle.

FRED FERRETTI is a wine and food writer whose articles have appeared in many national publications. Formerly a New York Times reporter, he was also a columnist for Gourmet magazine for many years.

XAVIER FLOURET is owner of Cognac One, LLC., a national wine importer and New York wine wholesaler. The company focuses on sustainable and organic privately owned wine estates throughout the world that specialize in the best expressions of terroir and wine appellations.

DAVID FRIESER, the fine wine purchaser at Park Avenue Liquor Shop in Manhattan, is a frequent wine lecturer and has been professionally involved with wine for more than 30 years.

DOROTHY J. GAITER is senior editor of Grape Collective. She and her husband, John Brecher, were wine columnists at The Wall Street Journal from 1998 to 2010 and are also the authors of four books on wine.

CURTIS GREEN is president and founder of TenFolk Enterprises, a wine education and marketing company created to broaden interest in wine among African Americans. He also publishes SlitelyChilled.com, the online magazine geared to the African- American wine drinker.

DAVID LECOMTE is chief winemaker at City Winery. A native of France’s Rhône Valley, he earned degrees in viticulture and winemaking in France and worked in French, American and Chinese wineries before making wine in the heart of Manhattan.

As president of the Wine and Spirits Program, HARRIET LEMBECK has taught consumers and wine trade personnel for 35 years. She is the author of the 6th and 7th editions of Grossman’s Guide to Wine, Beer and Spirits and is a contributor to Beverage Dynamics Magazine.

GILLES MARTIN serves as the winemaker and director of operations at Sparkling Pointe Winery on Long Island, New York, and as a consultant to many other Long Island wineries. French-born, he studied winemaking at Montpelier and has worked at Roederer Estate and Delas Frères.

DAVID MILLIGAN is president of David Milligan Selections, representing fine French producers. In the wine trade for more than 30 years, he began his training in England. He also served as president of Seagram Chateau & Estate Wines.

President of her own company, Cornerstone Communications, MARSHA PALANCI has managed media relations emphasizing wine for 20 years. Previously she served as vice president for Schieffelin & Co., where she worked with Dom Pérignon, Moët & Chandon and Marqués de Riscal.

LIZ PALMER is the author of The Ultimate Guide to Champagne. She is also a wine journalist and global wine judge, founder of UPSocial Wine and Spirits Agency, President of Les Dames d’Escoffier Ontario, and on the board of FIJEV – Paris.

On the staff of Heights Chateau, a wine shop in Brooklyn Heights, for more than 20 years, JUDITH RUNDEL takes part in wine-buying decisions, coordinates the Wine of the Month Club and writes the shop’s website. She also conducts wine tastings and classes.

ARNO SCHMIDT has been the executive chef of New York’s Waldorf Astoria, The Plaza and other famous hotels. In that capacity, he has organized numerous wine and food events. Born in Austria, he has worked in hospitality since 1946.

BOB SHACK is owner and president of HB Wine Merchants/R. Shack Selections and of Clos Robert Winery in Sonoma, California. Formerly he served as vice president and manager of the Premiere Wine Merchants Division of Rémy Martin Amerique for 20 years.

WILLIAM SHORT is regional manager, New York, for Dreyfus Ashby & Co., a fine-wine importing company. At 36 years, he is the longest-tenured salesman in the company’s history. Before joining the wine field, he taught school for 10 years.

AYELE SOLOMON is the winemaker and a pioneer in honey wine at his company, Bee D’Vine, in California. As well as still honey wine, he recently released the world’s only sparkling honey wine.

PAMELA WITTMANN is the principal of Millisime, Ltd., her 17-year-old public relations and marketing firm specializing in helping foreign wineries enter the U.S. market. With degrees in oenology and in business, she has worked in wineries and wine sales.

Here is a list of the winning wines, which were recently announced: