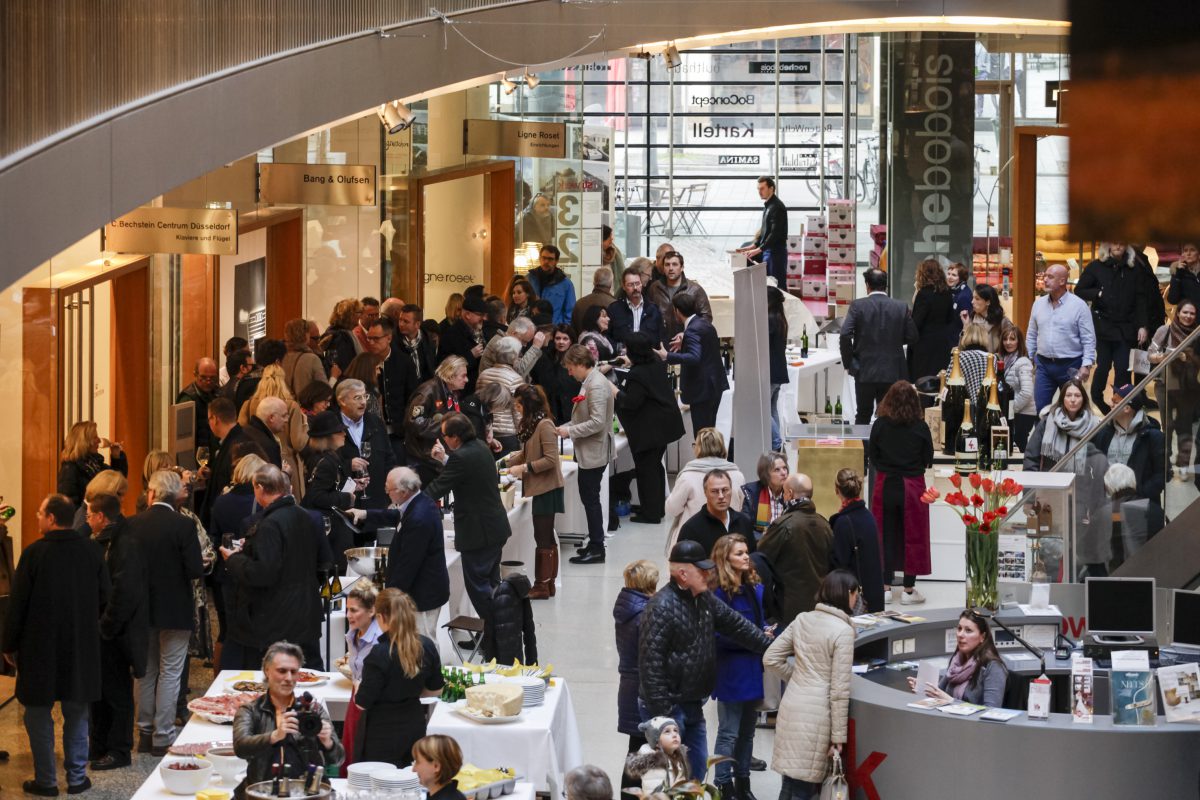 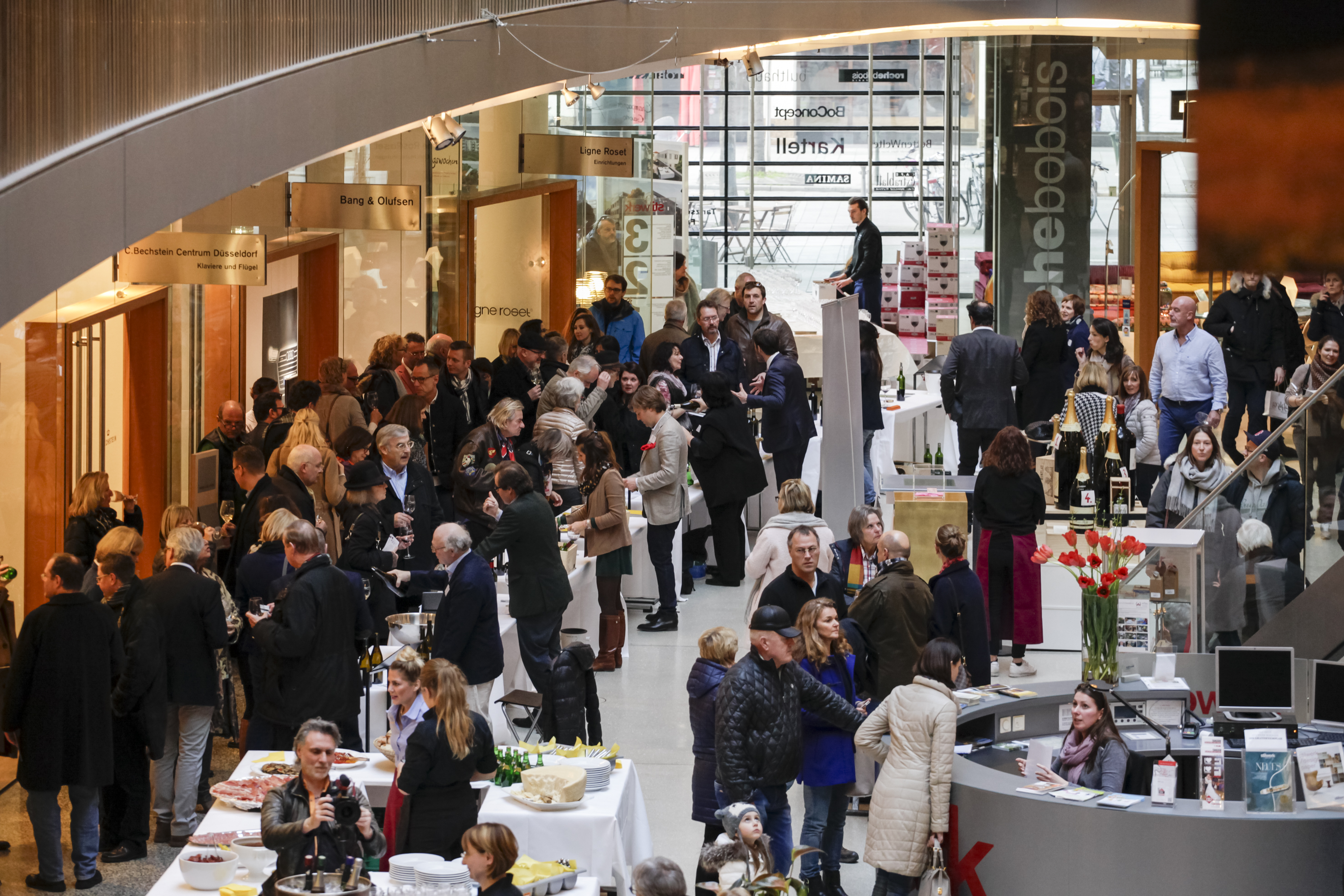 The success of ProWein continues unabated. Once again, from 13 to 15 March 2016 more exhibitors and visitors from throughout the world came to the leading international fair for wines and spirits in Düsseldorf. Over 55,000 trade visitors came here to gather information at the stands of the 6,200 exhibitors, to place their orders and take advantage of the varied supporting programme. As many as half the visitors now come to Düsseldorf from abroad. Now in its 10th year ProWein goes City was once again held in and around Düsseldorf with numerous wine events for all wine lovers.

The variety of ProWein is unique worldwide. At no other event is there such a wide and international range on offer. At ProWein 2016 all relevant wine regions of the world gathered in Düsseldorf, including numerous market leaders from Europe and abroad. The largest exhibitor nations this year included Italy (1,500), France (1,300), Germany (1,000), Spain (550), Austria (320), Portugal (300) and Overseas (600). Added to this were some 420 exhibitors from 30 countries with their special spirits. Exhibitors from a total of 59 nations attended the event.

This line-up attracted over 55,000 trade visitors from throughout the world to Düsseldorf – corresponding to some 6% over last year (2015: 52,000 trade visitors from 123 countries).  Here ProWein is increasingly becoming a top global event: this year visitors travelled from 126 different countries. One in two visitors came to Düsseldorf from abroad. The highest rise outside Europe was posted by visitors from Overseas, mainly from Asia. Overall, we are seeing a trend where ProWein is primarily attracting decision-makers with great purchasing responsibility: over 70% of visitors came from top or middle management. The success of the trade fair was also highly rated: one in two visitors confirmed that they found new suppliers and two-thirds were able to go home with useful info on trends and innovations. Just under 96% stated they had entirely reached the goals of their trade fair visit. “Figures clearly show that ProWein is the world’s most important business platform for the entire sector. This is where the trade fair budgets are spent. And also for the major, prizewinning wine estates ProWein has now become the absolute must-attending event,” says Hans Werner Reinhard summing up the success of ProWein 2016.

Siobhan Thompson, CEO at Wines of South Africa (WOSA), echoed this sentiment: “ProWein is the most important trade fair for our South African producers – primarily due to its great global relevance. ProWein gives us the opportunity to come into contact with all key contacts from throughout the world. This was also confirmed again this year.”

Monika Reule, Managing Director at the German Wine Institute (DWI) explains: “ProWein has once again shown that it is the world’s leading wine trade fair. Receiving special praise was the quality of the national and international trade visitors.”

Once again this year ProWein was accompanied by a varied supporting programme. Over 300 events were on offer either at the exhibitors’ stands themselves or at the central ProWein Forum. Added to this were other tasting opportunities – for instance, in the Champagne Lounge or at the MUNDUS VINI selection. Now in its second edition the “same but different” special show showcased new and unusual paths in wine production or marketing. In the FIZZZ Lounge light yet also very tasty Shim Cocktails were mixed and presented as new trend drinks. Here, too, visitors gave top marks and proved extremely satisfied with the line-up at ProWein.

After the fair closed for the evening all wine friends were also catered to fully in and around Düsseldorf. The ProWein goes City feature celebrated its 10th anniversary attracting visitors with its many exciting events. Whether wine menus, cookery course, bottle parties or art exhibitions – there was something for all wine lovers here.

Immediately following ProWein in Düsseldorf is the premiere of ProWine Asia from 12 to 15 April 2016 in Singapore. Now in its fourth edition ProWine China in Shanghai will run from 7 to 9 November 2016. The next ProWein in Düsseldorf will be held from 19 to 21 March 2017. And the dates for ProWein 2018 have already been fixed, running in Düsseldorf from 18 to 20 March 2018.