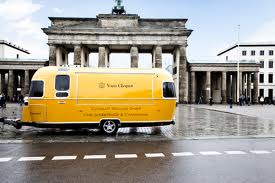 The Clicquot Rolling Diner is an unconventional street food concept that has been popping up at random locations throughout Berlin.

The Rolling Diner team has teamed up with Berlin foodies, Chipps to deliver inventive dishes like Trüffel-Currywurst and Crêpe de la Bastille.

An original 1950’s Airstream food wagon has been modified into a bright ‘Veuve Clicquot-yellow’ diner that tours the streets of Berlin serving unique streetfood with champagne. The first stop was KaDeWe for Fashion Week, which was clear to be more than a success.

It is an open, unmarked territory—a gastronomical no man’s land and this is the reason that Veuve Clicquot chose Berlin as the place to execute its concept.
Brand manager, Saskia Farnholz wants to demonstrates that champagne can go with food without diminishing its quality. “We needed something that travels, is visible, and can get across the idea that you can mix street food with champagne—even heavy German food.