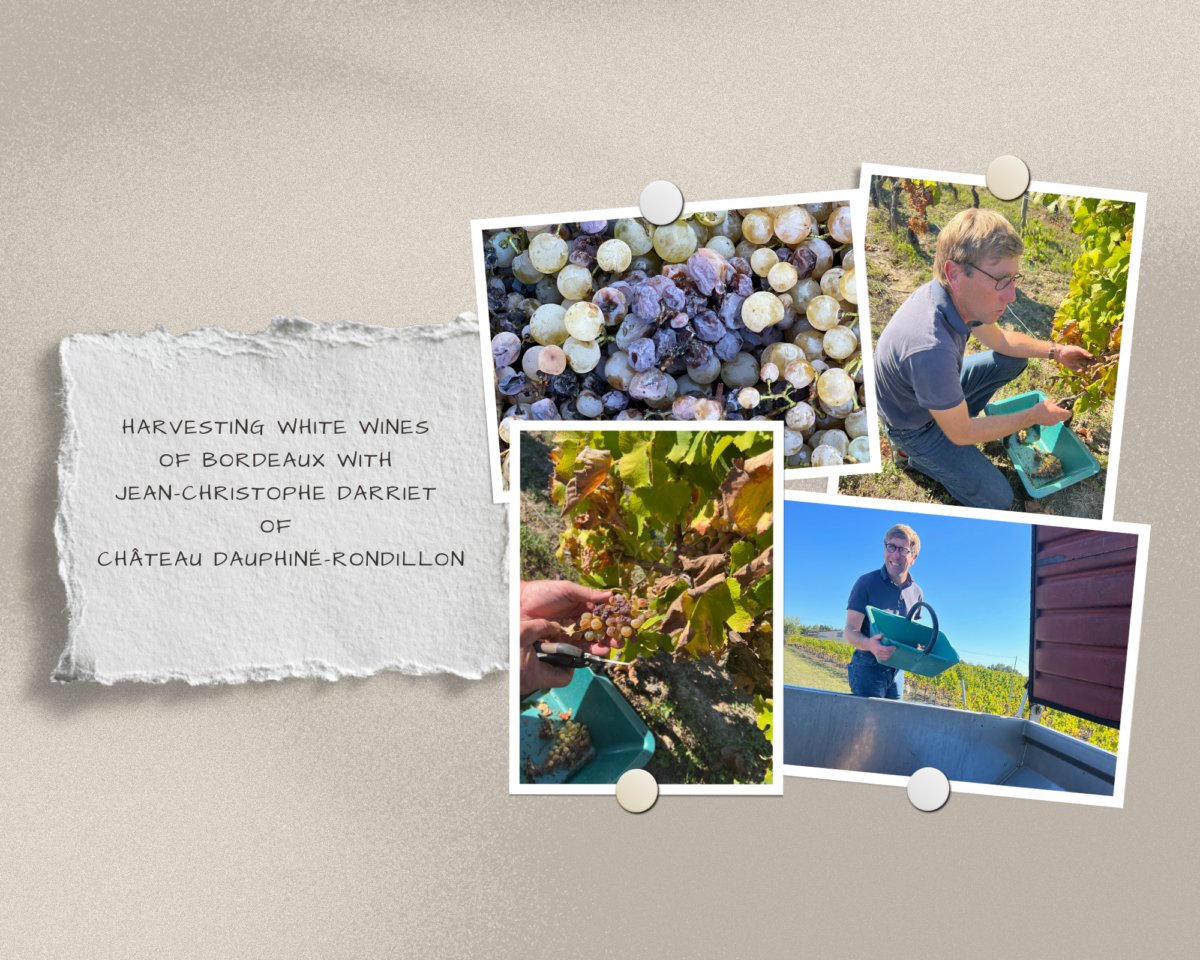 Some History
Château Dauphiné-Rondillon has been in the hands of the same family for eight generations. The Darriet Family history began in 1798 when Alfred Darriet started making sweet wine on the Loupiac property, using grapes affected by botrytis. Eight generations later, siblings, Sandrine and Jean-Christophe carry on the family tradition.

I had the amazing experience to harvest with owner/winegrower Jean-Christophe Darriet to hand-pick a few rows of vines of botrytized Semillon from the Château Dauphiné-Rondillon property.

Botrytis Cinerea or Noble Rot
I learned that harvesting botrytized grapes is a rigorous process that includes several passes to ensure that the grapes have the maximum noble rot when harvested. The grapes should contain over 45 g/L of residual sugar. Botrytis cinerea, or “noble rot” – is a necrotrophic fungus that helps concentrate the sugar in the grapes which increases the intensity of flavors through the wines. Depending on the location of the vineyard, some grapes could have higher acidity which makes the wine seem less sweet – this is all measured. The goal is to balance the acidity and the residual sugar. When this is accomplished, it makes the wine more favorable to be a versatile food wine.

Some of the yields are lower throughout the region following heat, drought, and hailstorms during the growing season. The CIVB cited ‘attractive but small berries’ and healthy vineyard conditions during the crucial flowering period and for harvest.

After experiencing this traditional method of handpicking we headed over to the historic tasting room to savor and experience the Cuvée d’Or Château Dauphiné-Rondillon 2015.  What an amazing experience! 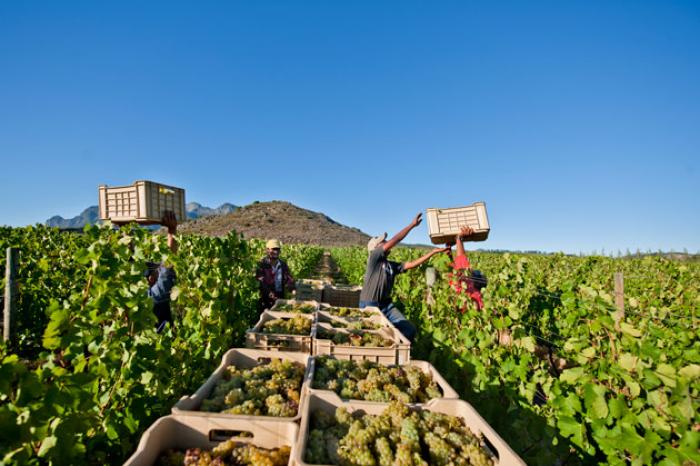 The South African wine industry is celebrating an exceptional harvest this year thanks to cool temperatures, unusually high rainfall and a late harvest.

In terms of volume, the 2021 wine grape crop is estimated at 1,461,599 tonnes, according to the latest estimate of industry body SAWIS (South African Wine Industry Information & Systems) on 19 May 2021 – that makes it 8.9% larger than previous years.

The 2021 harvest kicked off around two weeks later than normal due to unusually cool weather conditions throughout the season, which persisted throughout harvest time and resulted in some wine grape producers harvesting their last grapes in May.

Water resources were also replenished in most regions following the recent drought, which contributed to good vine growth, bunch numbers and berry sizes.

“Wine lovers can really look forward to remarkable wines from the 2021 crop,”​ said Conrad Schutte, consultation service manager of Vinpro. “The cooler weather enabled producers to harvest their grapes at exactly the right time, and viticulturists and winemakers are especially excited about good colour extraction, low pH levels and high natural acidity in cases where vineyards were managed effectively, which all point to exceptional quality wines.”​…. https://bit.ly/2SEJH0z ..continues 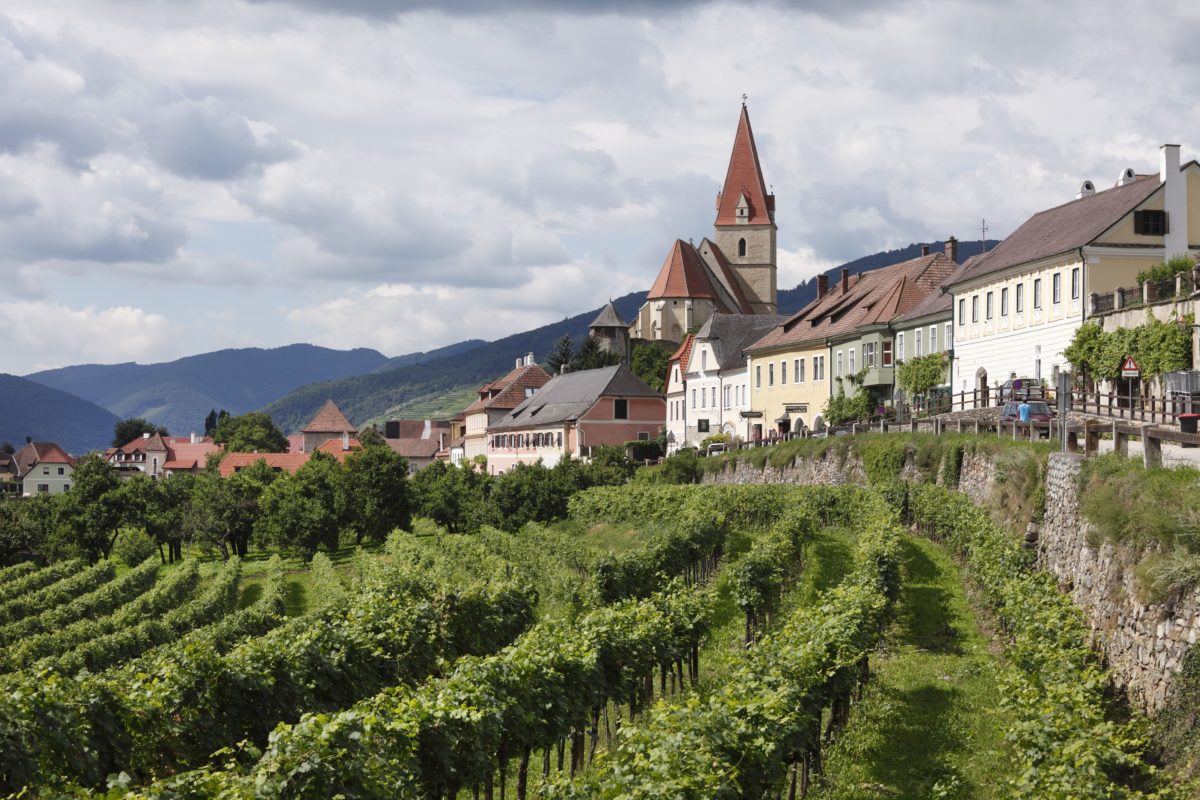