Megan Starr, Travel Editor, Content Editor, and Marketing/SEO Specialist, based in Frankfurt, Germany has recommended The Ultimate Guide To Champagne as one of the ten best Champagne books to read.

“Liz Palmer’s The Ultimate Guide to Champagne is one of the best books available for those looking to learn everything about the world of Champagne. A perfect accessory for a beginner, it takes you through the history and makings of Champagne, from how to shop for it to how to store it. The book’s exquisite detail and the clear in-depth knowledge possessed by the author is easily transferred from writer to reader.

Hailing from (Toronto) Canada, the author has spent plenty of time traveling throughout the region getting to know the area in great detail that you would easily believe she spent her whole life living and working there.” 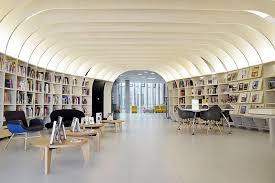 I’m honoured to announce that my book “The Ultimate Guide to Champagne” is now available at La Cité du Vin’s “Reading Room” reference library under the category of “Champagne Books”.

La Cité du Vin’s “Reading Room” is an area open to everyone, offering a wide selection of literary, historic, artistic and anthropological works relating to the world of wine. Here you will discover more than 1,200 key works in 16 different languages for reference use.

La Cité du Vin is a unique cultural venue in Bordeaux, France, devoted to wine as a cultural, universal and living heritage. It offers amazing experiences around the world, throughout the ages, and across countless cultures and civilizations. You can book tickets on their website www.laciteduvin.com and onsite.

The book consists of 22 chapters covering everything from the region’s history and viticulture, to tourism information, gastronomy and even health benefits.

The book is recommended for everyone, from beginners to experts. It’s a remarkable point of reference into which any wine-lover or professional can dip in and browse.

The book is available on Amazon.com https://www.amazon.com/Ultimate-Guide-Champagne-Liz-Palmer/dp/0991894634 and private events.

You are invited to a very special event on the rooftop of one of the most coveted private members’ club’s in Toronto, The Spoke Club!
The soiree will be all about champagne. While sipping your first glass of Perrier-Jouet, and enjoying the stunning views, the Award Winning Liz Palmer, author of The Ultimate Guide to Champagne, will talk about champagne and take questions on everything you always wanted to know on the topic! Liz will also take time to sign her book, which is a perfect gift for all champagne lovers. You can pre-purchase a copy of The Ultimate Guide to Champagne through Eventbrite or purchase it at the event. [*special event price]

Discounted prices on Perrier-Jouet throughout the evening.

Liz Palmer AuthorOver the last few months I’ve mentioned various awards that my first book “The Ultimate Guide To Champagne” has been up for. Here is some more news I want to share with you!

My book has won the National Award for the best French Wine Book at the Gourmand World Awards 2017.

Saturday, May 27th is the award ceremony for “Best in the World” Gourmand Awards (Wine and Drinks), which is held in China. Here is a list of the French Wine Books participating:

I’m also excited to announce that The Ultimate Guide To Champagne has recently been accepted into the “Taste Canada” Awards under the Culinary Narratives category, with a short-list being announced July 18 via Twitter! Here is a list of books that are contenders for this category:

Flowers, Frankie (Ferragine, Frank).Food to Grow: A Simple, No-Fail Guide to Growing Your Own Vegetables, Fruits and Herbs. HarperCollins, Toronto

Ishii, Caroline.The Accidental Chef: Lessons Learned In and Out of the Kitchen. Author, Ottawa

Le, Stephen.Million Years of Food: What Our Ancestors Ate and Why It Matters Today. HarperCollins, Toronto

Best of luck to all !

TORONTO – The Gourmand Awards jury has announced that “The Ultimate Guide to Champagne” by Liz Palmer is a finalist in the category “Best French Wine Book”. The book was published by Liz Palmer Media Group Inc., Toronto.

“Being announced a 2017 finalist in the Gourmand World Cookbook and Wine Book Awards was a surreal feeling,” says Liz. “I was sitting on the tarmac at the João Paulo II Airport (Azores) going through my emails and found the press release … I wanted to jump up and down—I was so excited!!” “It’s truly a real honour to be nominated!”

The Ultimate Guide To Champagne will now compete in its category against winners from other countries for the Best in the World. The results will be announced on May 27 & 28, 2017 at the Gourmand Awards Ceremony in Yantai, China.

ABOUT THE BOOK
There is much more to champagne than the drink – Champagne is named after the region where it is grown, fermented and bottled. This essential guide takes you to this region, explores its culture and honours its history.

Unlike any other book about Champagne, The Ultimate Guide To Champagne is the most comprehensive and visually stunning guide you’ll ever come across – in these pages you’ll discover:

Over 220 Engaging Photos, Maps, Detailed Charts, and Historical Anecdotes
How to Explore the Region
Grape Varieties and Styles
Grand Marques / Growers and Cooperatives, The Annual Viticulture Cycle, Harvest and Production, Champagne and Food Pairing Guides
How to Cook with Champagne
Recipes from Champagne Families
How to Taste and Identify Flavors
How to describe and Rate Champagne
How to Shop, Store and Serve
Champagne Etiquette & Style
Tips for Weddings
International Champagne Bars
The Economics of Champagne
Health Benefits
Science Facts
Extensive Glossaries
and much more…

The Ultimate Guide To Champagne is highly recommended for everyone, from beginners to experts. It’s a remarkable point of reference into which any wine lover or professional can dip in and browse.

The Champagne Bible for ALL wine lovers.

ABOUT THE GOURMAND AWARDS

• The Gourmand World Cookbook Awards were founded in 1995 by Edouard Cointreau. Every year, they honour the best food and wine books, printed or digital.
• Books from 209 countries participate in these prestigious awards, the only international competition of the sector.
• Every year, Gourmand gives the awards in a very special location for gastronomy. The awards ceremony is an opportunity to meet top people in the world of food wine and books: hundreds of international publishers, authors, chefs and journalists participate.

Liz Palmer is available for interviews and live appearances.