First of all Blanc de Blancs is a French term that means “white from whites”, and is used to designate Champagnes made exclusively from Chardonnay grapes.

Secondly – Champagne Geography – the key districts for Blanc de Blancs are the Côte des Blancs and Côte de Sézanne. The Côte des Blancs is particularly famous for its Chardonnay and yield the best examples of this style. The six grand cru villages include: Avize, Chouilly, Cramant, Le Mesnil-sur-Oger, Oger and Oiry. In Champagne, unlike Burgundy, the grand cru classification is linked to its villages and not vineyards. The designation denotes not only the highest-quality grapes—but also, generally, those that command the highest prices.

Thirdly, the differences in aromas and flavors are attributable to terroir. For instance, the Côte de Sézanne tends to yield riper fruit, hence riper wines. Other differences are the result of winemaking techniques, the degree of dosage, and other variables.

A classic Blanc de Blancs is restrained and elegant when its young, yet with ageing, it develops a mouth-coating brioche richness that overlays an intense expression of fruitiness.

Blanc de blancs Champagne is vibrant in its acidity it wants nothing more than to throw itself into comfort foods, seafood, and fried foods. 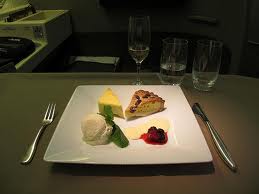 JAL has been renowned for serving up some of its home nation’s best sake, but now the Tokyo Narita-based airline is taking inflight drinking to a whole new level thanks to a new wine list that includes Champagne Salon.

JAL will be the only airline serving Champagne Salon Vintage 1999 in First Class, which will be on the wine list alongside Champagne Dom Perignon’s Vintage 2003, and 17 other fine wines that span the globe from New Zealand’s Martinborough to California.

Laurent-Perrier is one of the few champagne houses listed on the French stock exchange dedicated exclusively to champagne and focused on the premium segment. Laurent-Perrier offers a broad range of products renowned for their quality, and sold under the brands Laurent-Perrier, Salon, Delamotte, and Champagne de Castellane.

The accounts for the first half of the 2011-2012 financial year have been reviewed by the Supervisory Board chaired by Maurice de Kervénoaël.

The 13.3% increase in turnover reflects a better than market average commercial performance: Group sales volumes rose by 5.8%, whereas global shipments by champagne houses rose by only 2.2% between April and September 2011.

Thanks to a speeding up growth, the Laurent-Perrier brand has galvanized Group performance. Its value indicators continued the recovery begun in 2009-2010, with the export ratio gaining 3.8 points to 73.8% and the premium champagne ratio rising 3.3 points to 38.4%. Activity was especially dynamic on markets outside Europe, where the proportion of sales grew by 3 percentage points relative to the first half of last year. Especially noteworthy were the United States and Japan, where sales were up sharply over the half-year, confirming the brand’s growing international presence.

Taking advantage of a steady, coherent brand development investment policy, Laurent-Perrier has benefited from the warm welcome given to the new boxing and labelling of the brut champagne lines in January, from the launch of the 2002 vintage champagne and from communication campaigns featuring Cuvée Rosé.

The Group’s price/mix effect became markedly positive once more, at 7.8% compared with a negative 15.7% in the first half of the last financial year on the strength of the increased contribution of the Laurent-Perrier brand to turnover, the successful launch of Salon’s 1999 Vintage, and the price increase implemented during the first quarter.

Operating profit rose for the third consecutive semester, increasing by close to 10 million euros compared with the first half of the last financial year, and driving the operating margin above the 20% threshold to 21.6%. This significant improvement highlights the following advances:

• Gross margin picked up at 51.1%, a gain of 3.2 points in the first half thanks to a positive price/mix effect combined with an improvement in the grape harvest margin due to higher yields.

• At 27.5 million euros, commercial and administrative costs fell by 1.2 million euros over the period. The decrease reflects the Group’s continued strict financial management. Brand development investment amounted to 7.3% of turnover, in line with the long-term average.
The financial result was stable compared with the first half of FY 2010-2011, at 5.3 million euros. The tax rate was down slightly at 34.5%.

Group net income came to 9.49 million euros, treble the amount for the first half of the previous financial year.

Compared with the previous year, net cash-flow continued to pick up. Even if it remained in negative territory due to the seasonal nature of Group activity, it improved by 3 million euros during the six month period thanks to the trebling of net income and the stabilization of inventory levels.

The Group has, therefore, passed a new milestone in its debt reduction programme, which fell by 30 million euros in the space of twelve months, cutting the ratio of net debt to equity by 29 points in a year, to 120%.

Commercial and financial performance in the first half cannot be extrapolated to the rest of the current year, as the global economic environment will be more uncertain in the second half and the comparison basis less favorable.

The Group can nevertheless reassert its strategic choices.

Its priority remains to speed up the pace of international development for the Laurent-Perrier brand. This will be driven by sustained investment in the brand image, notably with the celebration of the House’s bicentenary in 2012.

The Group will continue to strengthen its balance sheet in line with the wishes of family shareholders, who intend to defend the independence of the House and pursue its development over the long term.

Laurent Perrier belongs to compartment B of Euronext Paris
It is part of the CAC Mid & Small, CAC Mid 60 and CAC All-Tradable indices