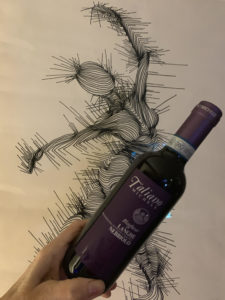 Beautiful ruby-red colour; it reveals perfumes of white flowers, raspberries, and cherries, which carry through to the palate; well-balanced tannins; Approachable now, this will also age well.
Best decanted.

Italy is in the grip weather hazards including hail, floods, tornados

Italy is in the grip weather hazards including hail, floods, tornados and strong winds, casting fears on the 2018 vintage in regions like Lombardy, Piedmont, Emilia-Romangna and Veneto.

According to Coldiretti, rainfall in June is 124% more compared with the historic average, and the country is experiencing its hottest summer since 1800.

This is the latest damage reported from a major wine country, following reports of fungal disease in Bordeaux threatening a 70% drop in crop, the ongoing wildfires in California and Germany’s earliest harvest on record due to unusual heatwave enveloping Europe.

“Climatic changes seem to have also impacted the Italian vineyards. It seems to be an abnormal Summer here in Italy, the most threatening weather conditions being floods due to excessive rain, hail and crazy wind called “tromba d’aria” in Italian,” Stevie Kim, managing director of Vinitaly International.

The adverse impact on the 2018 harvest in Northern Italy is early to assess but according to Kim, most producers remain cautiously optimistic and affected areas are mainly in parts of Piedmont, Emilia Romagna, Lombardy, Tuscany, Marche and Veneto.

“I know the affected areas include some parts of Piedmont, Emilia Romagna, Lombardy, Tuscany, Marche and Veneto. I’ve personally heard about damage to the corn fields, so far most producers that I’ve spoken to seem to be cautiously optimistic, however, in general most have concluded that their yield projection is lower. More importantly the Summer has not come to a close just as of yet,” she explained.

Last year, Italy’s grape yields dropped by 30% in some regions due to bizarre weather patterns, due to late spring frosts and drought.