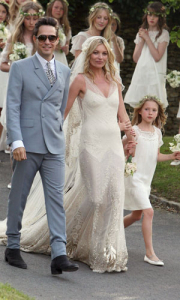 Newlyweds Kate Moss and Jamie Hince made a grand exit when they were airlifted out of the Cotswolds by helicopter.

The cover girl’s going away outfit was a cream Stella McCartney suit.

And the wedding after-party was a massive success – many of the A-list guests celebrated until the early hours of the morning, which included Jude Law, Sadie Frost, Jade Jagger and Meg Mathews.

Kate and Jamie’s wedding was an affair that lasted three days.

Grateful for the patience of locals over the celebration dubbed ‘Moss-stock’, the couple had a bottle of Moet champagne delivered to each household in their village.

Although the price of the marathon celebration has not been released, it’s estimated to have cost around £1 million.

The location of the honeymoon also remains unknown – although it’s been rumored that the happy couple were headed to Africa or Thailand for an adventurous getaway.