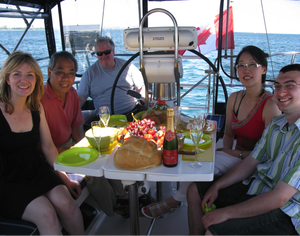 As a practising (and practical) Sommelier, it has long been a rule of mine to confine my examination of fine wines to dry land only, citing the importance of dexterity and balance; in other words avoiding, for instance, tasting delicate, delicious Champagnes on a 38-foot sailboat stationed several hundred metres off the coast of Lake Ontario. And yet, this is precisely what I undertook recently on the brilliant watercraft of avid boaters Liz Palmer, Wine Writer and Apprentissage Sommelier, with partner Robert Roland (jazz piano extraordinaire), both active affiliates of Port Credit Yacht Club, soon to play host to a multitude of fine wine tastings for its members. Also in attendance were fellow sommeliers Kate Hatherly, Richard Wah Kan, and Wanda Wang.

Of my hosts, let me just say that they are experts in combining the pleasures of wine and sailing with remarkable contentment — I believe the phrase “This Is the Life” was uttered on more than one occasion during my time aboard. Boarding Déjà Vu on a sunny thirty-degree afternoon, I was first treated with a refreshing serving of J’adore Tiffany Champagne Cocktail™ a creation of Liz’s own making, comprising one-thirds Champagne, mango juice, and pink lemonade. Delicious, refreshing, and strongly mango-flavoured, these were served in unusual conical-shaped glasses, which Liz had procured on her most recent expedition to Paris, from the Eiffel Tower.

Casting off and sailing out onto the water, we first partook of a lovely half-bottle of Chassenay d’Arce Brut NV ‘Sélection’ (89+/100, priced well under 20 Euros), comprising 90% Pinot Noir and 10% Chardonnay, sourced from the Aube winegrowing region of Champagne: revealing lovely scents of delicate toasted biscuits, lemon, pears, dried nuts, and spice; complex and elegant, though definitely lighter-styled. Quite interestingly, the claim to fame for this smaller-scaled house is its participation with various famous artistic establishments (including the Louvre) in organizing wine-and-art events. Usually, when one hears about such activities, one tends to think of Veuve Clicquot or Moët & Chandon, not the smaller houses – a real coup if you ask me.

With such marvellous Champagnes, Liz and Rob were wholly up to the task of providing a wide array of delightful food accompaniments for the afternoon. On her latest visit to Champagne, Liz had been able to procure a lovely packet of authentic ‘Roses de Reims Biscuits’ Champagne biscuits, used primarily as a palate-restorative by the locals whenever they partake of some bubbly. Combined with an exquisite helping of locally: (Champagne) crafted pork liver pâté, cheeses, crackers, and Californian berries (where else?), it was assuredly clear that all things edible only served to enhance what was truly a lovely Champagne-and-sailing outing … utterly worthy of mention in the inaugural column of ‘Wine Waves’ and GAM on Yachting.

I am beginning my ten-day journey to Paris, the Champagne Region of France and Belgium. I am flying “l’Espace Affaires”/Business Class from Toronto to Paris, and looking forward to the “Business Class” travel experience with Air France.

Settling into a large comfortable seat with a welcoming glass of Champagne, a copy of the Air France in-flight magazine immediately gets me into a “Parisian” mood. The magazine consists of Paris spring fashion trends, locations of the best restaurants as well as comments on what is going on in the art scene. This in-flight magazine is a fashionista’s dream come true; lots of French-styled shoes, dresses, purses…. In between sips of Deutz Brut Classic, I’m handed a dinner menu and wine list by one of the coiffed, well-mannered flight attendant who speaks both French and English.

The wine offerings are superior, and it is refreshing to see a well-constructed wine list that has ample offerings. I notice there is a reference on the menu that the wines have been chosen by Olivier Poussier, the World’s Best Sommelier in 2000 – this is an added bonus. The attendants place a white linen tablecloth on my table, immediately followed by fresh, delicious baguettes with creamy butter. I choose Saint-Veran Chateau de Fuisse 06 a nice easy Burgundy, to pair with my choice of seafood hors d’oeuvre of marinated shrimp, served with miso and ginger sauce, served with soba noodles.

The main course of grilled tournedos of beef with scallion butter, potatoes au grain, broccoli and tomato truly melts in my mouth, particularly paired with a glass of Clos Triguedina Cuvee Prince Probus 05. This is another perfect match and an excellent choice with meat and game-nice intensity and refinement.

Fine china, silver and an impressive wine list coupled with first class service, make me feel like I am in an exclusive international restaurant, not on an airplane! I skip coffee and chocolate torte, and decide to get a few hours of sleep. I found sleeping a delightful and restful experience. The tilted seats turn into a perfect horizontal position and pillows and quilts are quite abundant. Within a few hours I awaken to the smell of fresh coffee brewing…Y E S I’m almost in Paris. The French-style breakfast consisted of juice, yogurt, fresh fruits with pastries, lots of coffee, and Champagne if I want – so perfect!

My “l’Espace Affaires”/Air France Business Class experience has truly proven to be Crossing the Ocean in Style! 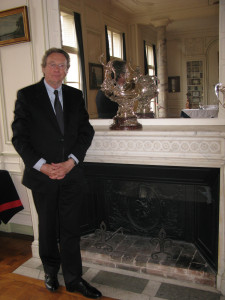 The Grande foyer of this highly prestigious club is adorned with trophies, cups, sculptures, paintings and half-hull models (of its members).

HISTORY
Yacht Club De France (YCF) was founded in 1867 during the Second French Empire, and according to Maritime Literature is one of the oldest yacht clubs in the world.
Admiral Rigault de Genouilly served as the club’s first Président from 1868 to 1870. According to Philippe Court, twelve of the 20 past-Présidents have been Admirals. By tradition, a strong bond unites the Navy and the Yacht Club de France. This relationship extends to marine trade, fishing and salvage values which are fundamental to the Yacht Club de France and its members.
The club remains faithful to its mission: “helping the development of recreational boating in all its forms; cruise as race, defending and promoting values of solidarity, courtesy and moral elegance that motivate all seafarers”.

LOCATION
Yacht Club De France was formed and established to be close to the “Power” or the “Institutions”. Avenue Foch has the reputation of being the most expensive residential neighborhood in Paris and one of the most expensive addresses in the world, as well as home to many grand palaces, including international ambassadors, Onassis and the Rothschild families and others.
In addition to its landlocked Paris headquarters, Yacht Club De France has developed close–ties with yacht clubs located on all coastlines of the hexagon and overseas.

Apart from the trophies and cup races, YCF organizes the annual prestigious Coupe de France (the elite of the yachting world), the annual Autumn Cup, and together with the Yacht Club Italiano, the Giraglia Cup regatta from Saint Tropez.

The Coupe de France Cup is a beautiful ornate silver trophy,
designed by the jeweler of the Place Vendome Cardeilhac

MEMBERSHIP
Yacht Club De France is one of the world’s most distinguished and influential yacht clubs. The membership currently has over 500 members, (20% female and 80% male members).

A prospective candidate must have two sponsors in order to obtain membership admission. Ownership of a sailboat, large or small, civil recognition, civic and military, are not part of the election criteria, only a matter of adherence to the values of the club and the desire to “serve” to defend, at sea and ashore. The merit of the application is submitted by the sponsors to be reviewed by the Commission of the Interior, who shall in turn submit to the Council.
Distinguished Members include under the high patronage of the President of the Republic

LIBRARY
Since its inception, the Yacht Club de France has been and continues to build, collect and preserve prestigious maritime heritage that illustrates the memory, and new maritime adventures of its members. The Heritage Commission is working to highlight these treasures.

Dining, Menu and Wine list
Taittinger is a staple on the wine list
Secrets from Chef Benoît Fleury