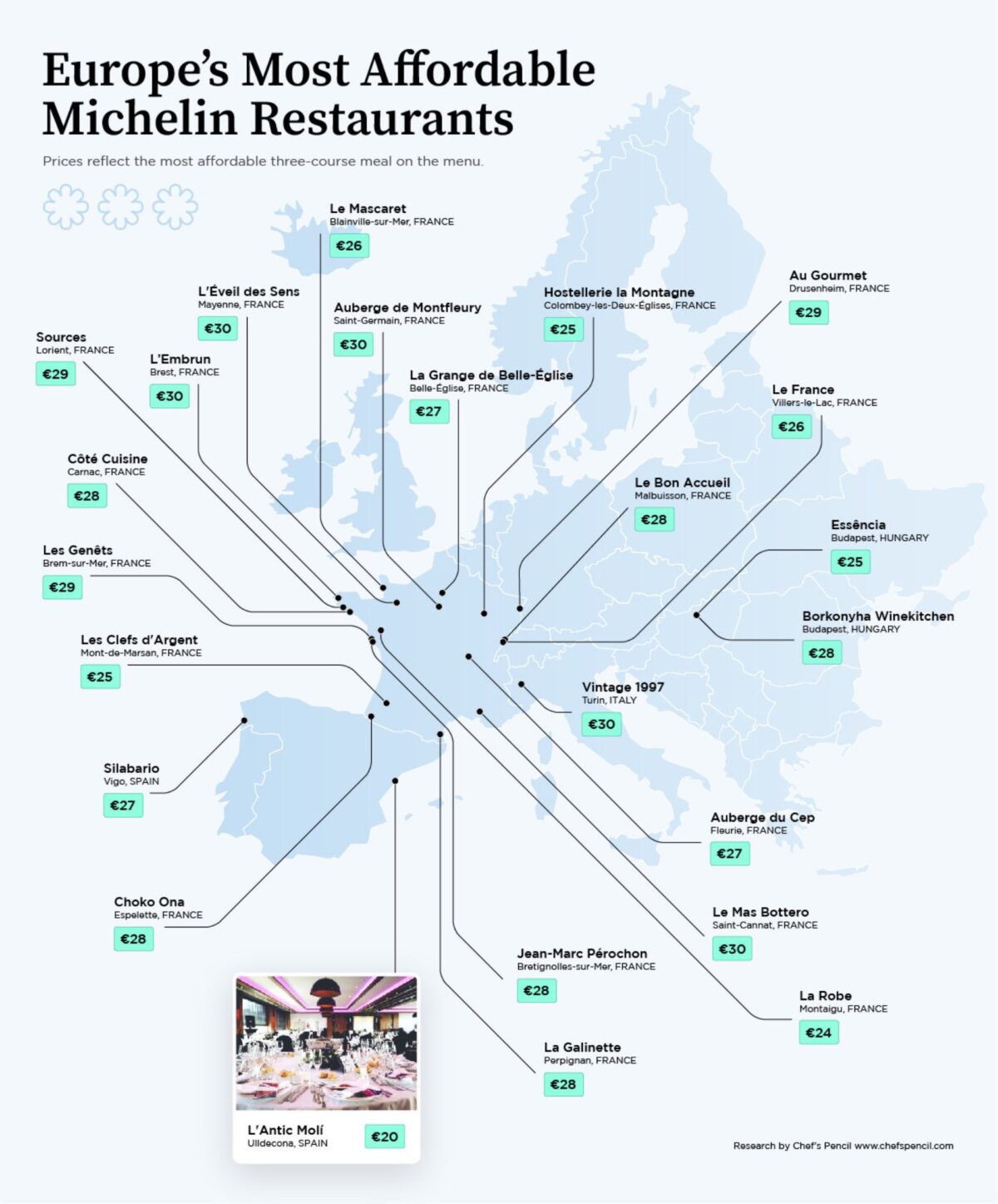 Travel restrictions are FINALLY relaxing across Europe and it’s now time to travel and spoil yourself!  Good News! You can surprisingly dine at a Michelin-starred restaurant without breaking the bank and here is their advice – shift from a dinner reservation to a lunch reservation. Most restaurants offer a menu du jour, or menu of the day at lunch, which is more affordable than the regular tasting menu at dinner.

Chef’s Pencil recently featured a map of the top Michelin-starred “most affordable” restaurants in Europe (under 30 Euros) – here is their top 10 for you to try!

L’Antic Molí is one of the best restaurants in Spain and is about a two-hour drive south of Barcelona, ​​is the most affordable Michelin-starred restaurant in Europe. Here, surrounded by greenery and with a beautiful panoramic view, you’ll spend 20 /person for a lunch by chef Vicent Guimerà Sales, if you choose to have lunch in the Espai Bistro.

The Hostellerie la Montagne – a Michelin-star restaurant located in Colombey-les-Deux-Églises in the Haute-Marne department of France’s Grande Est region.  This is the region where the former French president Charles de Gaulle lived (and later buried). This is why the restaurant’s dining room is called A la table du General (at the General’s table). Chef Jean-Baptiste Natali proposes a lunch ‘menu du marché’, a market menu, starting at 25 euros, consisting of an entrée, main course and dessert.

Another French restaurant, Les Clefs d’Argent in Mont-de-Marsan, is located in the southwestern part of the Hexagon. Here, chef Christophe Dupouy offers a menu that interprets the flavours of the territory in a contemporary key, with an exotic spin. A ‘très chic’ address, where you can stop and try ‘Le Menu Retour du Marché’, three dishes prepared according to the produce of the day and Christophe’s inspiration, available only for lunch from Tuesday to Friday.

Essência can be found in Budapest, and is the restaurant led by the Portuguese-Hungarian couple Tiago and Éva Sabarigo. Guests can savour an original menu that draws on Hungarian and Portuguese cuisine, choosing a “fusion” tasting-menu that combines the two cultures. Among the most convenient options, there is no shortage of proposals for lunch starting from 25 euros / person.

The Hotel Restaurant Le France is in the heart of the Haut-Doubs. Here, chef Hugues Droz tempts you with creative dishes, capable of blending flavours, colours and great technique. All can be savoured in a warm environment, where design meets the territory, including refined details and decorative elements made with local materials.

Le Mascaret is located in the spaces of a former convent for women in Blainville-sur-Mer, a small town in Normandy. The setting is decidedly baroque, but with a modern touch, while the dishes by chef Philippe Hardy are super-creative and well defined. With a ‘la petite table’ formula, at lunch, guests can try a very economical fine-dining experience: at 26 euros / person, the menu includes dishes revisited by the chef with a ‘French touch’, capable of combining tradition and modernity.

The Silabario restaurant is located in Vigo, in the region of Galicia, in the north-west of Spain. Here, right under an imposing glass dome that houses the headquarters of the Real Club Celta de Vigo football team, chef Alberto González Prelcic prepares a delicious array of dishes with fresh ingredients from the local market at a very affordable price. The menu, at 27 euros / person, is available from Monday – Thursday for lunch and dinner, while only for lunch on Friday.

Auberge du Cep is located on a famous Burgundy wine route, in the Beaujolais region. The restaurant is led by chef Aurélien Merot, who stands out for iconic dishes with a very French style, mainly focused on jus and sauces. There are several tasting menus to combine with the remarkable selection of regional wines. Try the ‘menu du marché Grille-Midi’ for 27 euros, served every day for lunch, except Saturdays and public holidays (one starter, one main course and one dessert).

The Michelin-starred restaurant La Grange de Belle-Église, located in Belle-Église, in northern France, expresses the quintessence of French gastronomic attitude according to Chef’s Pencil. Directed by chef Marc Duval, who offers dishes prepared with high-quality ingredients and a wide selection of Bordeaux wines and champagnes. The menu du marché is served at midday, during the week (except holidays), and offers fresh seasonal produce.