This traditional afternoon tea is surrounded by over 300 years of royal history.

A few weeks ago, I spent the afternoon with my daughter and daughter-in-law devouring a lovely selection of finger sandwiches, tea cakes, scones, jam and clotted cream.  We chose the ever-popular Earl Grey Blue Flower tea and a flute of champagne to sip while overlooking the manicured gardens at Kensington Palace. 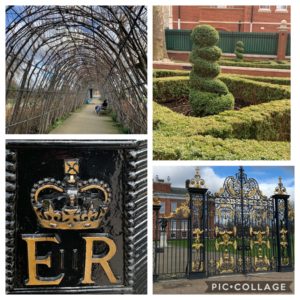 We all had a taste of what it’s like to be a royal!  Great experience and highly recommend it.

The History of Afternoon Tea

Prior to the introduction of high tea into Britain, the English had two main meals: breakfast and dinner. By the middle of the 18th century, dinner for the upper and middle classes had shifted from noon to an evening meal served at a fashionably late hour. This did not suit the Duchess of Bedford, Anna Maria Stanhope (1783-1857). She seemed to suffer from ‘a sinking feeling’ at about four o’clock in the afternoon. At first, the Duchess had her servants sneak her a pot of tea and a few bread stuffs but then began inviting friends to join her at five o’clock in her rooms at Belvoir Castle. The menu centered around small cakes, bread and butter sandwiches, assorted sweets and, of course, tea. The summer practice proved so popular that the Duchess continued it when she returned to London and high tea was quickly picked up by other social hostesses.