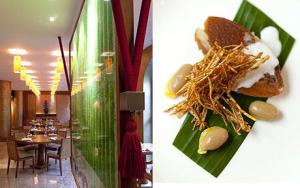 The Halkin has launched a series of celebratory events to commemorate its 20th Anniversary which focuses on cuisine, Champagne, culture, and design throughout the month of September.

First in the series of events, The Halkin has teamed up with Louis Roederer Champagne to create an exclusive ‘Halkin at Twenty’ celebration dinner. One lucky Halkin guest can expect to win a gourmet experience with 20 of their friends at London’s acclaimed Thai restaurant ‘nahm’. The dinner includes a menu created by Head Chef Matthew Albert, a selection of fine wines and Champagnes by Louis Roederer Champagne along with a Master of Wine (MW) to guide you through the menu and wine pairings.

About nahm
nahm is the first Michelin-starred Thai restaurant in Europe, and is for serious gourmands who value originality and tantalizing cuisine. The venue is decidedly modern and chic.

To become eligible, make your hotel reservation online between July 20th and August 20th. The lucky winner will be drawn on The Halkin’s anniversary on Tuesday 20th September 2011.