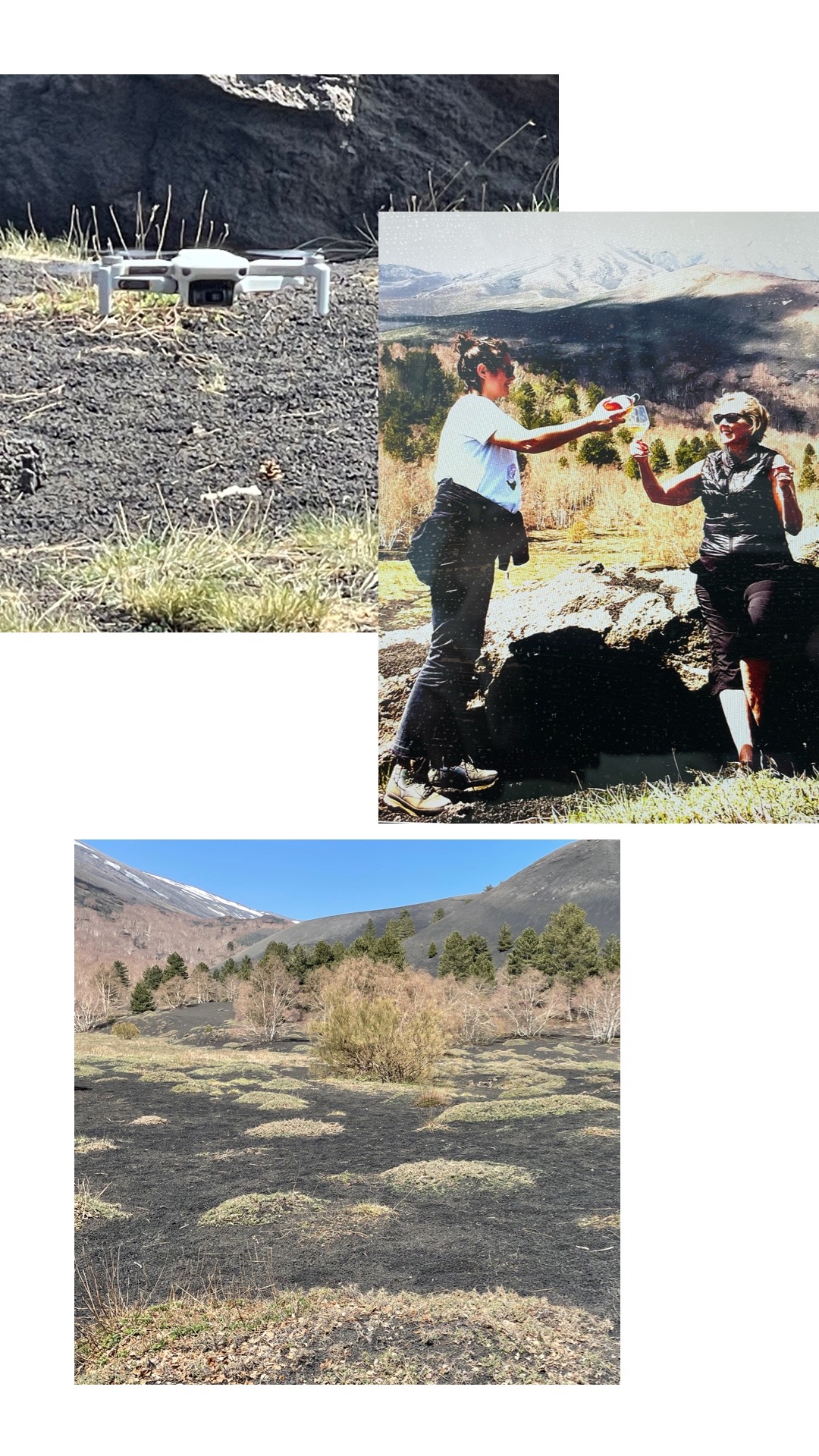 …….Pls note:  DF will be found on my Instagram @lizpalmer_

One of the most memorable highlights of my trip to Sicily was a 1.5 km hike up Mount Etna with Federico Lombardo di Monte Iato, COO of Firriato wines, and Rossella Marino Abate, Consulente Social Media presso Firriato and to celebrate the trek tasting Le Sabbie Dell’Etna Rose 2021 on lava rocks.

Experiencing Mount Etna in person was like visiting a distant planet, as you can see from the footage. We had clear visibility with various cloud formations which made the trek more magical. Views of the terrain were spectacular….

We walked through startling volcanic landscapes: silver birch woods, pine forests, and lava flows.  The terrain was very challenging with the altitude changes and unstable volcanic rock, but worth it!

There are documented records of Mount Etna historical eruptions dating back to 1500 BCE. Scientists have found that activity has frequently originated from its summit areas, which include the Northeast Crater, the Voragine-Bocca Nuova complex, the Southeast Crater (formed in 1978) and the New Southeast Crater (formed in 2011).  Another crater, the “cono della sella” developed during 2017 between SEC and NSEC. Its most recent eruptive period began in September 2013 and more recently has been characterized by Strombolian explosions, ash plumes, lava fountaining, and flows.

And believe it or not scientists have numbered the volcanos and Mount Etna is active Volcano Number 211060.  Its last known eruption was February 23-25 2022 CE. A brief overview of the report follows.

INGV reported that during 23-25 February activity at Etna’s Southeast Crater (SEC) was characterized by Strombolian activity and occasional ash emissions that rapidly dispersed to the SSW and SSE. At 1338 on 24 February a forceful ash emission from Northeast Crater drifted SSE. A diffuse ash emission rose from the same crater at 1642. Emissions at Bocca Nuova Crater consisted mainly of gas with occasional minor ash content during 21-27 February.

The grapes come from different areas of the North side of the Etna. The soil

the Northeastern side of the Volcano (720 metres above sea level).

Beautiful fine pink colour; The wine has pronounced intensity on the nose with aromas of ripe raspberries, pomegranate, and minerality; on the palate there is freshness, medium acidity, with flavors of strawberries lots of minerality through to a long finish.  A great elegant wine that reflects the territorial characteristics of its origin.