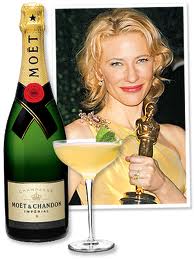 Moet & Chandon is holding a competition to find the best “Oscar Cocktail” and the winning drink will be served at the Governors Ball. The winner will also receive tickets to a behind-the-scenes “Oscar weekend” with bleacher seats on the red carpet, and much more.

The winner will be determined by the number of “likes” received along with a panel of judges. Judges include: renowned mixologist and cocktail writer, Lindsay Nader; Moët & Chandon USA’s Vice President, Ludovic du Plessis; Oscar-nominated costume designer and Chair of the Academy’s Governors Ball, Jeffrey Kurland; and chef, and host of the Cooking Chanel’s FoodCrafters, Aida Mollenkamp.

The winner and his/her guest will receive:

To enter: http://oscarcontest.moet.com
Submit your recipe (which includes Moet & Chandon) and photo.