Tesco has announced the arrival on its shelves of the first lighterweight Champagne bottles.

The lighter weight bottle initiative, which is being led by the Comite Interprofessionnel du Vin de Champagne (“CIVC”), will see a 7.2% weight reduction in standard 750ml Champagne bottles – taking them from 900g to 830g.

Tesco has demonstrated its support for the programme with the news that its exclusive De Vallois Champagne is now supplied in lightweight 830g bottles.

This forms part of a “concerted sustainability drive” for Tesco, which will see all of its Champagne bottles lightweighted over the next few years. The aim of the exercise is to reduce glass waste, cut carbon emissions and lower transportation costs.

Andrew Gale, category technical manager for the Tesco beers, wines and spirits division, said: “We are delighted to be further expanding our existing lightweight bottle range to include Champagne bottles and expect to see all UK stock in this format within the next few years. We are fully committed to reducing glass waste across our entire drinks portfolio and are working closely with our suppliers and the wider industry to deliver significant CO2 reductions throughout our supply chain. We are confident that the Tesco shopper will respond positively to the move.”

Tesco secured headlines last year when the retailer introduced the lightest-ever wine bottle onto its shelves weighing in at just 300g, compared to a standard bottle at 420g. 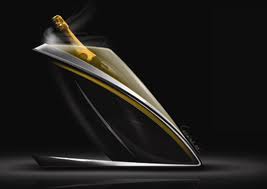 On September 1 Australia joins the global movement to support robust truth-in-labelling laws that protect consumers by requiring that wine growing place names are reserved exclusively for the regions where the wines come from.

Any bubbly produced in Australia after September 1 can no longer be labeled as “Champagne”, and will have to be called ‘sparkling wine’ or other term.

There has been a trade agreement signed between Australia and European Union which is meant to protect winegrowers around the world, and to enforce labelling laws, an initiative of the Comité Interprofessionel du Vin de Champagne, or CIVC in France.

Russia and Vietnam continue to mislabel their bottles, says a CIVC spokeperson, and more than 50 percent of sparkling wine in the US is mislabeled as champagne.

Canada has robust labeling laws and consumers have been educated and are aware they are purchasing a bottle from the Champagne region of France.

To mark this industry milestone, CIVC has created this website to count down the days and minutes until the new Australian law comes into force http://countdown.champagne.us/

The 2011 Champagne harvest has begun and with a combination of early flowering, low rain levels in the spring and plenty of summer sun make it one of the earliest picking seasons since 1822, the Champagne Bureau said Friday.

Three grape varieties, Pinot Noir, Chardonnay and Pinot Meunier, are being harvested across the French region and weather forecasts are favorable for the next few days.

“As we celebrate another successful harvest from this unique region, we are reminded of the importance that location plays in every bottle of wine and renew our call on the United States to join the majority of the rest of the world in reserving the term Champagne only for wines made with grapes from this specific place,” said Sam Heitner, U.S. director of the Champagne Bureau.

“This year, the Comité Interprofessionnel du Vin de Champagne (CIVC), the region’s trade body, has raised the amount of grapes that can be harvested in a given area to 12,500 kilograms per hectare (kg/ha),” says Heitner. “They believe that this will keep Champagne on track to meet the growing demand. This is good news for Champagne enthusiasts everywhere, as more people will be able to enjoy real Champagne, which can only come from Champagne, France.”

Victory for the Comité Interprofession du Vin de Champagne (CIVC) last Friday in summary proceedings before the Presiding Judge of the District Court The Hague (P.H. Blok) against Unilever Nederland B.V., producer of Andrélon’s 70th anniversary ‘Champagne shampoo’. Some of the bottles were ‘dressed’ with a ‘collar’ bearing the signs ‘Champagne’, ‘70’ and the pay-off ‘Omdat we jarig zijn’(‘Because it’s our birthday’), depicted against a ‘sparkling’ background. Unilever accompanied the introduction of the shampoo with a commercial showing a garden party at which characters from previous Andrélon commercials are toasting to Andrélon with a glass of champagne. At the end of the commercial the shampoo bottle is shown with the text ‘Champagne Shampoo voor een feestelijke glans’ (champagne shampoo for a festive shine). Furthermore Unilever created an advertisement in which a bottle of shampoo is placed in a champagne cooler filled with ice with the accompanying text ‘Elke dag champagne’(each day champagne). After CIVC had summoned Unilever to cease and desist the use of Champagne, Unilever removed the wording ‘Champagne Shampoo’ from the text at the end of the commercial and rephrased the wording of the advertisement text ‘Elke dag champagne’ into ‘Elke dag feest’ (each day a party).

No mercy is either shown towards Unilever with regard to CICV’s claims for an injunction against the changed commercial and for a recall of all Champagne bottles located at retailers. The Presiding Judge holds that CICV has rightly argued that in certain circumstances a defendant who infringed a protected geographical indication is under an obligation to take appropriate measures to discontinue the wrongful situation created by himself. Accordingly the Presiding Judge rules that Unilever refrains from the promotion of the Champagne shampoo and to recall the remaining shampoo bottles available at retailers.

People looking for signs of economic recovery watch unemployment figures or housings sales or retail figures. In the wine industry, many look to Champagne sales. Demand is increasing for Champagne in the United States. Imports from the region nearly doubled in the first two months of 2010, compared with January and February 2009. The industry is still a long way from the boom times of just a few years ago, but there may be light at the end of the tunnel.

Nonetheless, Champagne producers are proceeding with caution when it comes to the bubbly supply. The Comité Interprofessionel du Vin de Champagne (CIVC), the industry’s regulatory body, set a maximum yield of 10,500 kilograms per hectare (4.7 tons per acre) for this year’s harvest. It’s a compromise between the region’s grapegrowers, some of whom bottle and sell Champagne themselves, and the merchant houses that purchase grapes for the bulk of their production. For growers, more grapes mean more money, while for producers, more grapes mean more wine to sell in an uncertain market when inventories in their cellars are already high.

“The growers wanted more, not only those who sell grapes but also those who produce and sell their own Champagne because they have done well so far and they do not have much reserves,” said Daniel Lorson, the CIVC’s director of communications. “On the contrary, the houses and the [cooperatives] wanted a lower level—below 10,000 kilograms per hectare—so the level that has been set is a compromise.” Last year the yields were limited to 9,700 kg/ha (4.33 tons/acre).

Despite the limit, the estimated crop level for the 2010 harvest is 14,000 kg/ha (6.2 tons/acre). That guarantees a complex scenario for the region come harvest time. Each producer is allowed to harvest grapes in excess of maximum yields and set aside the wine for use in future years, but the amount of reserves is currently limited to 8,000 kg/ha. Most big producers already have the maximum allowed stock of reserve wines or are close to the maximum, thanks to slower sales in the past three years.

So what happens to the surplus grapes? “The 10,500 kg/ha limit is based on the needs of the region as a whole,” said Sam Heitner, spokesperson for the Champagne Bureau, the representative of the CIVC in the United States. “The CIVC updates this limit every year based on the supply situation. Some years it has been higher and other years it has been lower.”

“As a decision on the amount allowed to go into the reserves will take place at a later date, we cannot provide the total harvest per hectare today. However, it is common practice in years with low harvest limits for the Champenoise to pick the best grapes out of each parcel to go toward the limit and the reserve wines and then leave the remaining grapes in the field to nurture the vines.”

The decision to limit the harvests both last year and now this year has stabilized grape prices. Stéphane Coquillette, a small grower in Chouilly, said he was pleased with this year’s increase over 2009 yields but, more important, the stability in the price of grapes.

Louis Roederer’s chef de cave, Jean-Baptiste Lecaillon, echoed Coquillette’s sentiment. “At Roederer, we think 10,500 or 11,000 kg/ha was the right decision, with a stable price for grapes, as our crop estimation in our vineyard is 11,500 kg/ha,” he said. “If everything goes well [with the weather], every grower should reach the maximum 8,000 kg/ha reserve qualitative individuelle at the end of harvest 2010.”

Pierre-Emmanuel Taittinger, owner of Champagne Taittinger, said there were still a few details to work out regarding the CIVC’s decisions, but he did not elaborate. Taittinger was, however, pleased with the increase in demand for bubbly. “As far as Taittinger is concerned, shipments for the first six months of the year are very good all over the world,” he said. “I think that the quality of the wines, the identity of the brand and the efficiency of the distribution network are paying. The value of the dollar versus the euro is helping obviously.”

The strength of the dollar against the euro recently has certainly helped sales of Champagne in the U.S. Xavier Barlier, vice president of marketing and communication for Maisons Marques & Domaines, Roederer’s U.S. subsidiary, also cited this as a factor in his Champagne house’s recent success.

The CIVC’s Lorson, though optimistic, remains cautious. “At the moment we are enjoying growth. We do not know if it is a steady recovery,” he said. “The situation is better than a year ago, because the destocking is over in most of our export markets. But the consumers are still trading down, which is not good for those who had based their prosperity on premium and superpremium cuvées.”

There is still a long climb for Champagne to reach 2006’s peak of 23.2 million bottles shipped to the U.S. “Our industry is very much dependent on the global economic situation, today more than ever,” said Lorson.