The gift boxes will be exclusively available in Selfridges, London in-store and online, priced at £49.99 for the Impérial and £58.99 for the Rosé Impérial.

The packaging can be personalized with a name or a message using up to fourteen characters. Gift boxes can be ordered by taking a bottle to a Selfridges personalization station in-store or selecting the relevant option online.

The gift box unveiling coincides with the launch of Moët & Chandon’s ‘London Calling’ campaign at the high-end department store. This will feature a Champagne bar and “concept space” featuring photographs of famous moments of celebration in London’s history.

The concept space is inspired by the design of the classic red telephone box, with space for guests to sip Champagne at a bar alongside the photographic exhibition.

Customers can choose from a range of Moët cuvées as well as Champagne cocktails, created in partnership with London bars Mr Fogg’s, Heads & Tails, Coupette and Disrepute.

A calendar of cocktail masterclasses will be held from 6 October to 25 November at Selfridges, co-hosted by Moët & Chandon’s Champagne Ambassador. These can be booked in advance https://www.eventbrite.co.uk/o/selfridges-oxford-street-london-6395244523 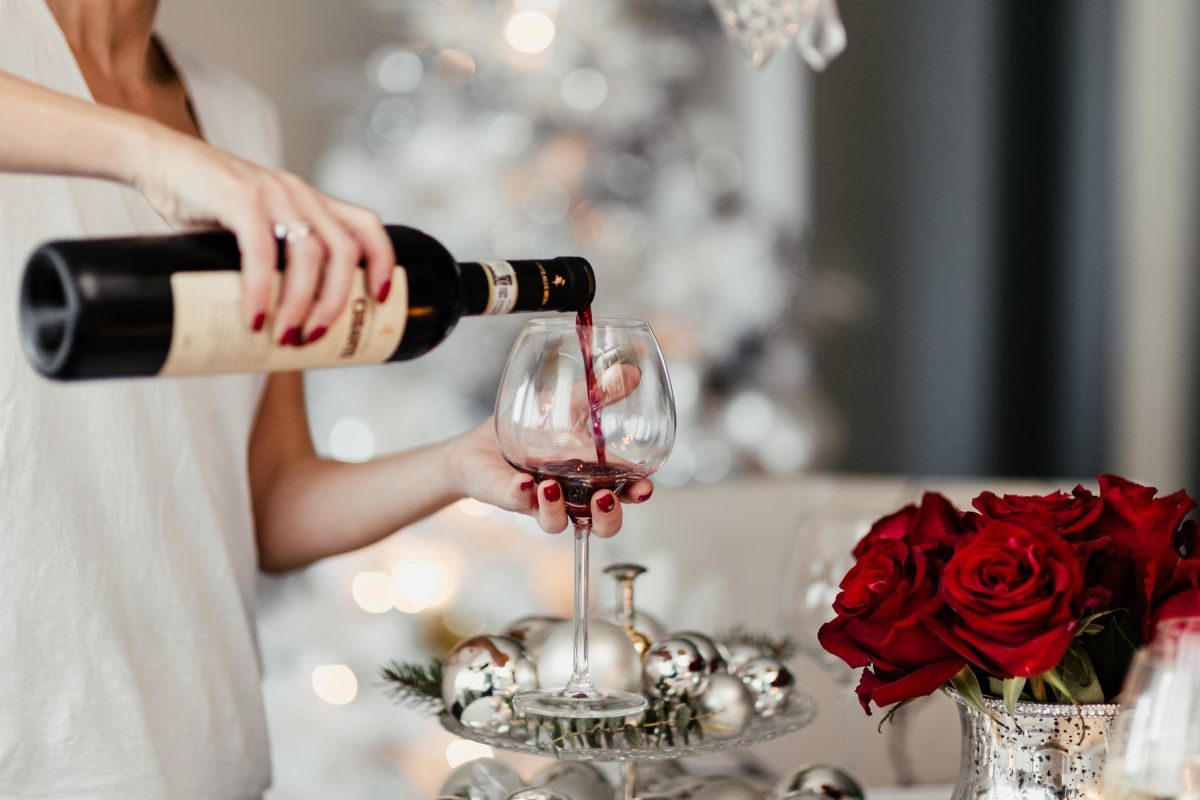 As I head off on my festive break, I would like to wish all my readers and partners a very Merry Christmas and a prosperous New Year!

Thank you all for your wonderful support, and for visiting my website to get the latest news on my wine travels, global wine and spirit news, launches and updates.

I will be offline for a few days, returning December 26.

In the meantime, check out my recent article Wine Trends:  What to watch for in 2020. 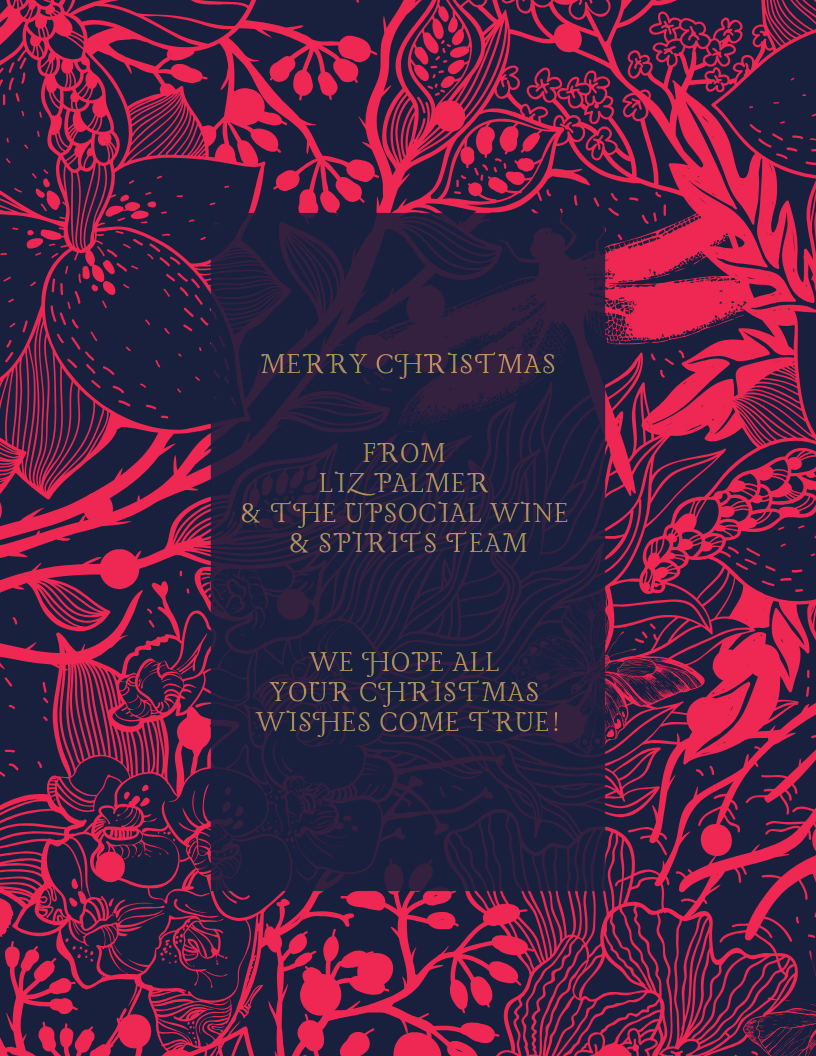 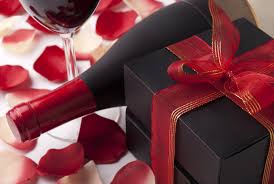 Wine remains the most popular alcoholic beverage to take to a Christmas/holiday party, with 59% citing it as their 1st choice, but 1/3rd that receive a bottle admit to “regifting” it to another, a survey by BIVB has found.

The average person receives four bottles of wine throughout the Christmas or holiday period and gives away an average of three bottles, yet more than three in ten of us (31%) often ‘re-gift’ a bottle wine that we receive.

But over a quarter (26%) admit to not knowing a lot about wine when purchasing wines, with price the deciding factor in most instances, with just over a fifth (21%) saying they buy whatever’s on special offer.

26% of respondents said it was the price that they looked at first, followed by style or grape variety (17%) and country or region (11%).

However, we are more likely to trade up at this time of year. According to a WSTA market report, outside of Christmas.

There is definitely something for every budget and occasion – I suggest you have a price range in mind before you go wine shopping – do your research.

Bordeaux Wines commissioned the research, which was carried out online by Opinion Matters in November and resulted in responses from 2,046 people aged over 18 in the UK. 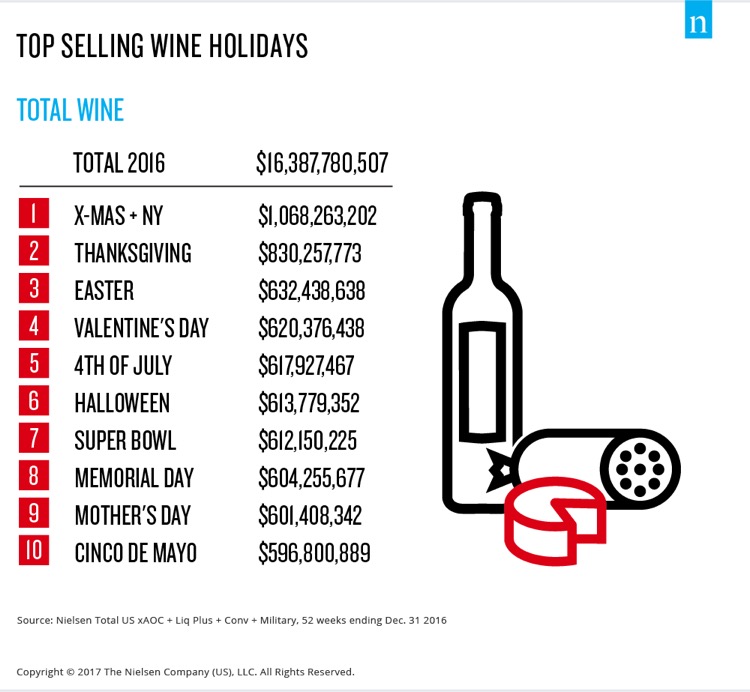 While wine of all varieties may be the drink of choice for many, spirits also benefit from the holiday season, as sales reach nearly $964 million in a mere two weeks. Christmas and New Year’s Eve are also the most popular holidays for spirits, which experienced a 79% spike in dollar sales in 2016 compared with the average two-week period. But not all spirits sell equally: brown spirits in particular (e.g., cognac and whiskey) see a dramatic sales lift during the holiday season. Cognac sales rise 104% from Christmas to New Year’s and increase 36% leading up to and including the Thanksgiving holiday than the average two-week period. Whiskey sales get stronger, too, with a 27% increase during Thanksgiving and a 98% increase in sales between Christmas and New Year’s compared with an average two weeks in 2016.

While Christmas, New Year’s Eve and Thanksgiving top the list of most important holidays for wine and spirits, beer, flavored malt beverages (FMBs) and cider sales see greater upticks during holidays in the warmer months. In fact, when it comes to Christmas and New Year’s Eve, beer/FMB/ciders rank only fourth on the list of top-selling holidays, with sales lifts of just 8% over the average two-week period. That slight increase, however, still amounts to more than $1.5 billion in sales, which is more than total wine or spirit sales. Despite beer not being a Christmas favorite, cider beverages see a substantial spike during the holidays with 19% more dollars being sold than the average two weeks in 2016 during Christmas and New Years. Also bucking the trend is craft beers with their diversified flavors and styles trumping other beer segments with seasonal sales around the holidays.

When it comes to U.S. holidays, food and adult libations will always be important. But different libations line up with different holidays. That’s why it’s critical that retailers keep the right assortment of products on the shelf for customers year-round to ensure they can choose the best product for the right occasion.