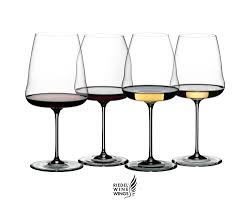 How it all started

In Summer 2018, in the hot and sunny Tyrolean Alps, Georg Riedel found himself asked by a customer to create “the ultimate glass” for the “King of Grapes”– Cabernet Sauvignon – a glass which would become the inspiration for a new glassware collection, Riedel Winewings.

For Georg, the challenge was how to begin research for this new glass. It helped that he had long loved the specific wine for which he had been commissioned to design the glass. With passion and enthusiasm, and with a coffee in hand, Georg made a start. Sketching the old fashioned way, he aimed to create a new shape, something revolutionary and supremely functional, a shape never seen before which, while respecting the 2,000-year-old art of glass-blowing, would eschew the egg-shape bowl developed by Claus Riedel and challenge the perception of how a modern functional wine glass should be.

Slowly, a new shape emerged: A flat-bottomed glass, wide and reminiscent of the wing of an aircraft, complete with winglets. As a new idea formed, Georg spent more than a year experimenting, tasting, sampling, benchmarking and fine-tuning. By making changes to shape, size and rim diameter, through computer-aided design and many prototypes, what began as one glass for one grape varietal developed into seven different glasses to represent the most popular grape varietals.

Riedel Winewings was born and was about to take flight!

Why a flat bottom?

In his own words, Georg Riedel describes the evolution and ultimate functionality of Riedel Winewings: “We make our first impressions by eye when assessing our chosen wine in the glass, and then we smell before we ever taste. I chose a flat and stretched bottom, with a wing-like shape to increase the surface between wine and air, which increases the levels of evaporation and develops a greater intensity of aroma. When positioning one’s head to the glass, the nose is closer and is exposed to the wider surface of the wine. However, this alone would not fully deliver the optimal aroma of each grape variety and so, to capture the delicate layered aromas, it was necessary to curve the glass walls and to correctly calibrate the opening of each glass with its rim diameter.”

There are seven styles: three for red wines, three for white and one for Champagne or sparkling wines. This glass collection is designed personally by Georg Riedel. It pushing the boundaries of the conventional wine glass shape and is striking in its design and in the words of Georg Riedel is “inherently functional, helping the wines’ aromas and flavors take flight”.