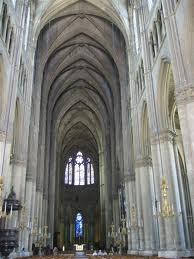 Both the United States and the Champagne Region Share History.

The Notre-Dame Cathedral of Reims, historic coronation site for French kings located in the Champagen region of France, celebrates its 800th anniversary this year.

Designated as a UNESCO World Heritage Site in 2001, the Reims Cathedral welcomed generations of French monarchs and nobility. Wines from the Champagne region were historically served at the royal banquets that accompanied coronations, contributing to Champagne’s reputation as a luxurious beverage.

To mark the cathedral’s 800th anniversary, Champagne houses and wineries have committed to restoring statuary located around the façade. The Comité Interprofessionnel du Vin de Champagne (CIVC), a trade association that represents the grape growers and houses of Champagne, France, has been a long-standing supporter of efforts to restore the cathedral.

The latest restoration is another in the ongoing series of projects undertaken to address significant damage sustained by the cathedral during World War I, many of which have been financed by supporters from the United States and the Champagne region.

Beginning in 1919, the Rockefellers, an American philanthropic family, funded a series of projects at the Reims Cathedral to restore the roof, Angel bell tower and grand fleur de lis. These efforts were integral to both the restoration of the world-famous cathedral and to attracting other long-term donors. Over the past decades, the CIVC has funded numerous restoration projects, including new stained glass windows and restoration of the chime, astronomical clock and neo-Gothic chandeliers.

The town of Reims has planned a series of celebrations through mid-October of this year to celebrate the cathedral, including concerts, exhibitions and a spectacular daily light show. For more information, please visit www.ville-reims.fr.