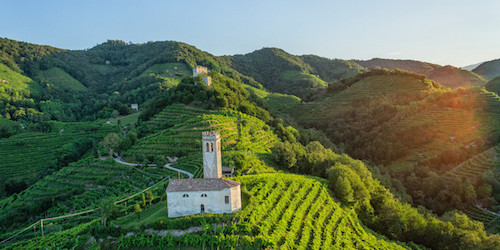 The harvest in the Conegliano Valdobbiadene Prosecco Superiore has just come to an end with yields down between 3% to 5% from last year.

“This month we have just spent on the Rive vineyards has been one of intense work,” said Consorzio president, Innocente Nardi.

Nardi said that this has been an exceptional year for the territory, “starting off with the accolade from UNESCO, but also including the fiftieth anniversary of the denomination and our ban on glyphosate, which has made us the largest wine zone in Europe to forbid the use of this well-known herbicide.”

According to a statement from the Consorzio, harvesting took place in ideal conditions. “We registered an average pH of 3.30 and acidity of 6.55, values that are ideal for the production of elegant sparkling wines,” said the statement.

After a cold winter, spring was cooler and rainier than usual, which caused a delay in bud break. This was followed by a hot summer, and the weather was fine during the harvest. The harvest began in the most easterly zone and one slopes with the most exposure to sunlight, such as the vineyards at San Pietro di Feletto.

The region’s steep slopes are difficult to harvest with machinery, and “600 to 700 hours of manual work are necessary per hectare each year”.

The wines from 2019 will be the first to take advantage of the new production regulations passed in August of this year, which allow for sui lieviti (“on the yeasts”) sparkling wines that have been refermented in the bottle, and extra brut, with residual sugar between 0 and 6g per Litre.