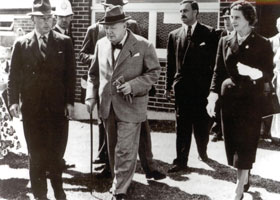 Sir Winston Churchill once described Pol Roger’s headquarters in Epernay as “The world’s most drinkable address”. Most recently, in homage to the relationship the former British Prime Minister had with the Champagne house, the municipality and Pol Roger worked out to rename the street where Pol Roger is based after the Statesman.

A spokesperson for the Champagne house in Epernay confirmed the street has been renamed with the new address: 1 Rue Winston Churchill.

“We are thrilled,” said Pol Roger U.K. director James Simpson, “to discover that Pol Roger has now moved house but curiously has remained in the same place.”

Churchill’s relationship with Pol Roger commenced around 1945. Shortly after the liberation of Paris, he received an invitation to attend a luncheon given by the British ambassador to France, and at this event he met the charming Odette Pol Roger, who eventually became a life-long friend.

Shortly after the death of Sir Winston Churchill, in 1965, Pol Roger ordered black-bordered labels to be placed on all their labels. In 1984 they also introduced a prestige cuvée named after him and made it in the robust, mature style he liked.

Most recently, Pol Roger’s white foil Brut Réserve Champagne NV was served at the wedding reception of the Duke and Duchess of Cambridge at Buckingham Palace.