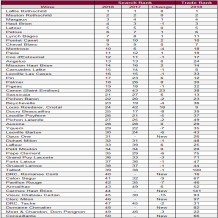 Each year around the summer season, Liv-ex examines the top 50 most-viewed wines, based on visits to their website from January to July.  The search-data acts as a barometer for the interests of fine wine merchants, showing where there have been changes in the trade’s interests each year.

The Bordeaux First Growths continue to occupy the top five spots in the table, with Lafite Rothschild holding its position as the most viewed wine by Liv-ex members. The only difference from last year is Margaux has leapfrogged Haut Brion into third place, helped along by this year’s most searched wine, Margaux 2015.

Brands on the move such as new entrant Carmes Haut Brion (+34) have been the winners so far this year. However, trade is yet to catch up with interest, as the wine ranks a lowly 141st in terms of trade by value. Canon has had another strong year. It has climbed 23 places into the 20th spot, after climbing 24 places in 2017.

Opus One is the largest non-Bordeaux riser, jumping 24 places. Louis Roederer, Cristal has also done well, jumping 18 places. Trade has also seen a corresponding increase in 2018, placing the champagne as the 9th most traded brand on Liv-ex.

For some to rise, others must fall. Traders appear to be losing interest in Super seconds as, amongst others, Ducru Beaucaillou (-8), Leoville Barton (-6), Leoville Poyferre (-5), Montrose (-4) and Pichon Baron (-2) have all subsided in the ranking.

Vieux Chateau Certan was the biggest faller, down 15 places.

This year’s top 50 are shown in the table in full.