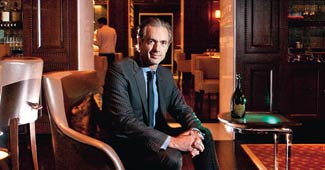 Daniel Lalonde, Chief Executive of LVMH is in India for the first time. Being interviewed at the top floor of Delhi’s recently opened Leela Palace Hotel, he states: “India is acquiring a taste for Champagne. Not only is it the 27th largest consumer of Champagne in the world,” he says. “But I believe that in the next few years India can easily reach the top 10.”

India is doing its bit. A few kilometers south, at the F Bar nightclub, where Lalonde’s company has established a Dom Perignon lounge to promote its luxury Champagne. Indians flush with money frequently a few times a week and spend upwards of Rs35,000 a bottle on bubbly.