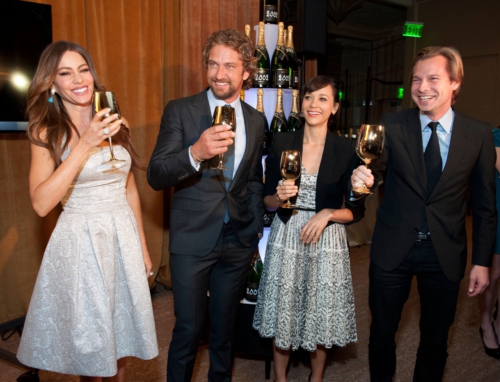 For over 260 years, Moet & Chandon has been the symbol of glamorous celebrations, turning the ordinary into the extraordinary with the pop of a cork. Moet has been the champagne of cinema since the early days of Hollywood, supporting several hundred films since the 1930s, ranging from small productions to international blockbusters including iconic films such as Love in the Afternoon, The Discreet Charm of the Bourgeoisie, Pretty Woman, Titanic, Ocean’s 12, Nine, Up in the Air, and more recently Sex and the City 2 and Wall Street 2. In the same way legendary film directors preserve timeless moments on film, Moet & Chandon continues to showcase its legendary love affair with the magic of movies.

Celebrities including George Clooney, Brad Pitt and Meryl Streep are expected to be among the 1500 guests celebrating the big event at the Beverly Hilton Hotel on January 15.

“More than 1,000 mini bottles and 500 magnums of Grand Vintage 2002 Moet & Chandon Champagne, with more than 9,000 glasses will be served on the red carpet, and inside the ballroom,” said the Hollywood Foreign Press Association, the non-profit organization behind the awards.