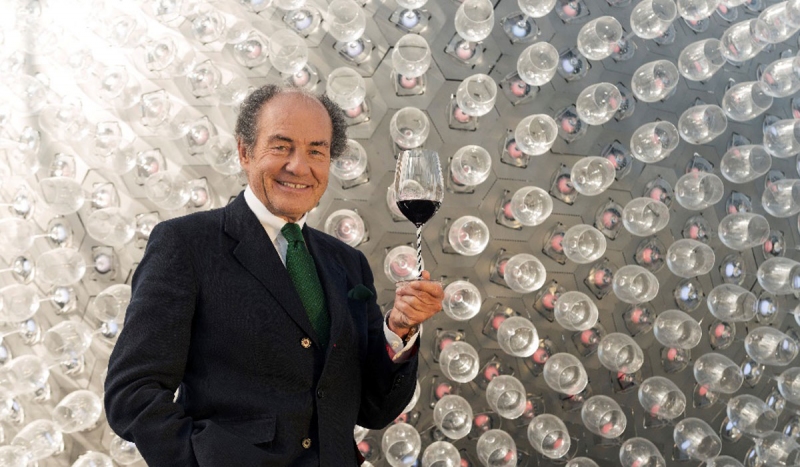 Writing in Wine Spectator, News Editor Mitch Frank states how Georg Riedel “revolutionized how we drink wine by spreading the gospel of his family’s wine glasses”. Georg educated tens of thousands of wine drinkers on the benefits of varietal-specific glassware and brought financial stability to the company in the 1980s through savvy business development and an evangelist’s approach to marketing his products.

“I am sincerely grateful to Wine Spectator for offering me this outstanding reward and it is an honor to be named in line with the most respected personalities of the wine and food industry,” says Riedel. “I am not the first Austrian, but the first glassmaker to be called to the Wine Spectator Olympus, and am very proud to share the honor with my team and family.”

Riedel follows luminaries of the global wine community in his receipt of the award and stands apart as the first glassmaker to receive the accolade. Past honorees include Julia Child, Robert Mondavi, Christian Moueix, Angelo Gaja, Francis Ford Coppola, Andre Tchelistcheff, fellow Austrian Wolfgang Puck, and Californian Governor Gavin Newsom – larger-than-life personalities whose contributions to the wine and culinary world are innumerable.

The Riedel family’s business began in 1756 when Johann Leopold Riedel (3rd generation) founded a glass factory in Bohemia (in what is today’s Czech Republic). In 1945, the successful family business came to an abrupt end due to World War II, when all German possessions were nationalized and German-speaking people expatriated.

In 1956, some two hundred years after the first factory was opened, Walter Riedel (8th generation) and Claus Riedel (9th generation) were offered the unique opportunity to take over the bankrupt glass factory Tiroler Glashütte in Kufstein, Austria. It was in this new period that Claus Riedel became known as the first glass designer to create wine-friendly glassware. His designs were launched from the 1950s to the 1970s, and continue to have a major impact on today’s universally known glass shapes.

Georg Riedel (10th generation, born 1949) joined the family business in 1973 as the company’s accountant. At an early stage, he became passionate about wine and how glass shapes profoundly influence the perception of wine’s aromas and flavors. Gifted with fine senses and supported with strong commercial talents, he quickly took over the company’s direction, developing varietal specific glassware.

At the same time, a New World wine boom created new demand and highlighted new wines of classic varietals grown on foreign soils. The launch of Riedel’s first machine-made line, VINUM – the perfect wine glass at a popular price level – built the foundation for a solid future for the company.

Georg opened his first subsidiary as importer and distributor in the USA in 1979 and have since opened eight more around the globe including China, Japan, and Australia. He was the first to approach wine distributors to represent the Riedel brand, which grew the company’s presence around the world to over 100 countries. As a shrewd businessman, without bank loans and using accumulated company cash, Riedel acquired the then much larger glass companies Nachtmann and Spiegelau in 2004. With this takeover came the opportunity for Riedel to produce all glasses in the company’s own factories.

Today, Georg’s children Laetizia, a solicitor and Maximilian, the current CEO, are the Riedel team members responsible for directing and guiding the family business as the 11th generation.