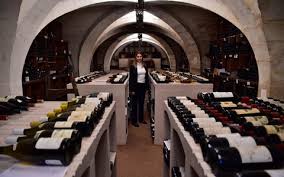 France’s Elysée Palace has officially opened its doors to its wine cellar first time this past weekend as part of a bid by President Emmanuel Macron to promote national heritage.

There were 350 members of the public who toured the cavernous cellar which houses 14,000 bottles, from all the wine growing regions of France.

“This is the first time we’ve opened the cellar to the public,” Virginie Routis, the Elysée’s sommelier for the past 11 years, told Europe 1 radio.

The three-meter high vaulted cellar is two floors below ground level and keeps a plethora of fine wines and spirits, from cognac to top champagnes, at an ideal temperature of 13 degrees Celsius.

The also cellar contains prestigious vintages such as Cheval Blanc, Latour, and Puligny-Montrachet. Its oldest bottle is said to be a 1906 Sauternes.

“The wine is chosen according to the menu. I make a selection…Madame and Monsieur Macron also get to approve the choice. We really have to represent French gastronomy, so you have to choose wines that speak to a given foreign delegation,” she said.

The cellar was designed in 1947. During Jacques Chirac’s presidency in 2013, some 1,200 bottles were auctioned off as the quantities were too small to serve at official dinners.

Unlike his teetotal predecessor Nicolas Sarkozy, Mr. Macron is quite knowledgeable on French wines and has confessed to drinking a glass of wine at lunch and dinner.

He has chosen to open the cellars as part of France’s annual Heritage Days, where numerous state and listed buildings are exceptionally opened to the public.