There are two things you can be sure of when taking a food and wine itinerary in Sicily: you will always learn something new, and you will always leave a piece of your heart there when you leave. From the 13th to the 15th of July a well-organized press tour by Assovini Sicilia, led a handful of international journalists in three intense days to discover the Southeastern part of Sicily.  First in the area around the village of Noto from the Baroque splendors, to the promised land of Nero d’Avola; and then in the territory of Vittoria, the area of the now unique Sicilian DOCG, with the homonymous Cerasuolo name. Many estates were visited, dozens of wines were tasted together with producers, and a combination of cuisine specialties of the island were interpreted by local cooks or starred chefs. A continuous temptation, and indeed, an inexhaustible discovery. 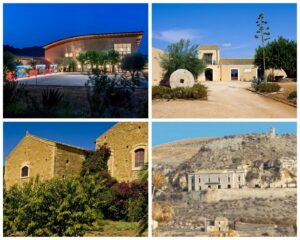 Sicily’s Southeast, the heart of the island in the center of the Mediterranean Sea
Sicily is in the heart of the Mediterranean Sea and the largest under vine area of Italy. An area that counts a multitude of appellations that are slowly becoming more and more famous thanks to the success of productions able to clearly express the combination of Sicilian microclimates. From the vineyards on the island of Pantelleria to the extreme fields on the slopes of Mount Etna, Sicily is an island of unparalleled beauty and diversity. Southeast Sicily certainly embodies the essence of Sicily and embraces some of the most important wine areas among the dense web of appellations of the island. Noto DOC was created in 1978 to protect the local historical passito of Moscato. Recently the regulation has been expanded to include red wines based on Nero d’Avola, which today covers up to 84% of the vineyards. The area has been under vines for thousands of years. It is a sun-kissed, warm territory but it benefits from the mitigating effect of the coastal proximity. From these hills the view of the island is open, the sea breeze envelops the atmosphere, and the lively green of the vineyards is matched with the dark soil. Surrounded by beautifully restored ocher-colored farms. The neat geometry of the vine rows is organized by dry stone walls, sometimes alternated with monumental plants of prickly pears, and finally some small, sparse patches of trees that almost seem to wonder what they are doing there… 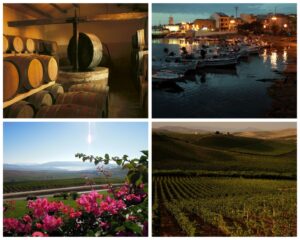 The scenario around the wine district of Vittoria is different. The territories of production include the municipalities of Ragusa, Vittoria, Comiso, Acate, Chiaramonte Gulfi, Santa Croce Camerina, Niscemi, Gela, Caltagirone, Licodia Eubea, Riesi, Butera, Mazzarino and Mazzarrone (five in the Ragusa province, two in the Caltanissetta province and two in the Catania province). The area is delimited to the north by the Erei mountains and to the south by the Mediterranean Sea. The inland is occupied by the majestic Iblei mountains from which many waterways descend. The streams have dug through the land and shaped valleys on which the vineyards climb, and through the thermal breezes coming from the coast, which can deeply affect the climate, creating abnormal temperature excursions close to twenty degrees. On Vittoria’s hills, the soils are differentiated by Millennial stormwater runoff, producers are able to use this to produce red wines characterized by structure and sapidity versus tremendously drinkable wines of immediacy of fruit. To visit the vineyard estates, it is necessary to go down into these valleys completely submerged by cultivations.

The possibilities are endless. The variability of climatic conditions with the multiplicity and succession of the soil (clay, sandy-loamy, limestone soils) allow producers to interpret their personal and intimate Sicily in their bottles of wines. The finesse of the Cerasuolo by Vittoria Docg is expressed in blends composed of the only two native vines allowed by the disciplinary: Nero d’Avola and Frappato, in 50 to 70% and 30 to 50% respectively. The two contrasting varieties prove to be extremely complementary. The fragrance of Frappato goes perfectly with the more meditative aspect of Nero d’Avola, creating unique wines. These styles of wines are neither light nor heavy, they go beyond any concept of the seasonality of wines. The depth and structure of Nero d’Avola are lightened and harmonized by the fresher aromas and elegance of the fantastic Frappato. Wine must speak for the territory as much as it can give a little hint of the soul of its inhabitants. Vittoria’s wines are bright and exuberant, just like the people there.

Land of tales with a wide array of beautiful wine estates to visit
South-East Sicily is one of the most coveted wine destinations for wine lovers and wine connoisseurs. Wine tourism has become a key factor for territorial promotion. There is an increasing number of tourists who visit these lands just to discover the wine traditions. While visitors discover the mosaic of small and large wineries hidden in every corner of those lands, the protagonists of the Sicilian wine scene have understood the infinite potential of their land and they are moving towards the future, offering more impeccable travel proposals, starting from unique experiences in the cellar, through food delicatesse, to beautiful retreats. The “blend” of ancient traditions and modern cultivation practices with market strategies and investments for hospitality and tourism has made Sicily one of the most interesting wine destinations in Italy. The pulsating center of the area is Syracuse. The City of Syracuse combines works of the Greco-Roman era, spectacular squares, artisan boutiques, and of course the breathtaking shores and a crystal-clear sea. To the Southwest lies Val di Noto. The rolling hills or the valley frame a few beautiful late-baroque towns such as Noto, Ragusa, Modica and Scicli. Perfect places to enjoy gastronomic delights in small Osterie, Taverns, or Michelin-starred restaurants, surrounded by works of art and monuments that exude the history of man. The rest of the land is wild with luscious green vineyards, rocky ravines and prehistoric tombs, a thread woven between nature and man that run from the hills to an uncontaminated rugged coastline. A wide array of properties with great wine production and hospitality proposals for wine enthusiasts and wine professionals. Here are the wineries we visited during the magnificent tour.

Assovini
Assovini was founded in 1998 and it is the organization that most supported and carried out the territorial development project in the last 25 years for wine production and wine tourism. Today, along with 90 producers and nearly 900 labels produced, they are aiming to bring the fantastic value of Sicilian wines worldwide. In this direction Assovini in 2004 created the event Sicilia en premieur: A yearly itinerant event where the producers and the members of Assovini, lead a selected international press through tastings, tours, masterclasses, and conventions.