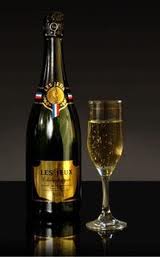 Hats, socks, t-shirts, balls, mugs – these are items that you would expect to find with the NBA logo proudly displayed. As of today champagne can now be added to this list!

‘Les Jeaux’ is a French term meaning ‘The Game”.

It’s been reported that Shaq was sipping Les Jeux this weekend at his retirement party at Moon in Las Vegas.
Les Jeux was handpicked by Etienne Delpech from a family known for its superior knowledge of vineyards and excellence since 1777. This Cuvee Brut Prestige is a combination of 25% Chardonnay and 75% Pinot Noir, combined with family secrets that achieve its exceptional taste.

The NBA has given this closely held secret the opportunity to represent the Best of Basketball and invites you to join in the celebration with one of the worlds finest Champagnes. “A Toast to Champagne Les Jeux”!