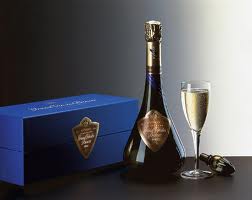 Among this list, Champagne Louis XV 1996 has already received international acclaims since the release of this prestigious cuvee. After spending more than 10 years in de Venoge’s cellars in Epernay, this 1996 vintage is now on sale with a beautiful packaging and its famous «carafe» bottle.

About Champagne de Venoge
For more than 170 years, Champagne de Venoge has earned itself a privileged place in the heart of the vineyards of Champagne. Ambassador for exceptional wines of Champagne, de Venoge is first of all a family story in the constant quest for excellence. A Blue Ribbon has been the symbol of the nobility since the 16th century. In 1864, when de Venoge launched its “Cordon Bleu”, it became a mark of distinction and refinement. At the edge of the Champagne tradition in its most beautiful and noble form, de Venoge’s reputation also lies in the terroir, the rigorous selection of the best grapes in Champagne and the perpetuation of a unique style. The fine vinosity associated to the incomparable freshness brings to de Venoge’s Champagnes elegance and harmony – All this for the greatest pleasure of Champagne lovers!