The custom of breaking a bottle of wine over a ship’s bow as it is being launched dates back to the late 17th century, champagne replacing wine in more modern times.

Initially the Navy ‘baptized’ their ships with a ‘standing cup’ of precious metal, which was “afterwords” thrown overboard, but with the increased production of ships as the British Empire spread across the world that became too expensive, so the cup was dispensed with and the bottle allowed to swing against the bow and break instead.

Inevitably superstitions grew up around this ceremony, reinforced in 1911 when the Titanic was launched for the White Star Line. Lord Pirrie, Chairman of Harland & Wolff, simply gave an order to the launch foreman to let the ship slide into the water. There was no formal naming ceremony, and no bottle of champagne was broken over her bows, so Titanic was never christened. The story of her short life is well known… 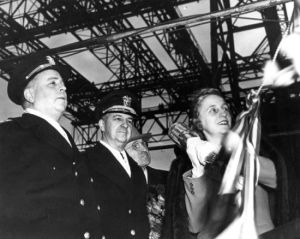