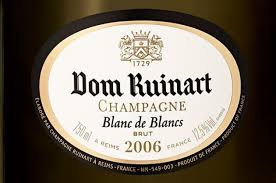 During the London launch last week of Dom Ruinart 2006 and Dom Ruinart Rosé 2004, Ruinart’s Chef de Cave, Frédéric Panaïotis said that supply was now being constrained by the amount of Chardonnay grapes it could source for the house – a specialist in Blanc de Blancs Champagnes.

“Everything is going well but my boss would be happier if we could get more Chardonnay grapes,” he began.

“Chardonnay is still less than 30% of the planted area in Champagne, and the price is not cheap for Chardonnay grapes, while buying vineyards is not easy, so we have to grow slowly: demand is faster than the growth we could have, but we are used to it,” he added.

Frédéric Dufour, the president & CEO of Ruinart, said that the supply of Chardonnay was limiting growth for the house, describing the grape as a “precious raw material” in Champagne.

“The hardest grape to get is Chardonnay, because even if you have Pinot Noir, you need Chardonnay, and Chardonnay is the least planted grape [in Champagne],” he said.

He then commented, “And for great Chardonnay you need chalk, and certain slopes, and the quantities of Chardonnay produced can be tricky – the grape is fragile because it blossoms early; so great Chardonnay is the most challenging to get.”

He also recorded that, despite the shortage, no more Chardonnay is being planted in Champagne, commenting, “Everything that can be planted to make good Chardonnay has been planted.”

Having observed that “everyone is after good Chardonnay,” he stated, “Good Chardonnay is the most precious raw material in Champagne today.”

Of the 34,000 hectares of vineyards in Champagne today, approximately 10,000ha are planted with Chardonnay, an area that has gradually risen almost 30% over the past 20 years.

Chardonnay is the least planted grape in Champagne, with more than 13,000ha devoted to Pinot Noir, and around 11,000ha given over to Meunier.

Ruinart is a specialist in Champagnes made from Chardonnay: Its ‘R’ de Ruinart NV contains a minimum of 40% Chardonnay; its Ruinart Blanc de Blancs is 100% Chardonnay, sourced predominantly from Premier Cru vineyards, while the Ruinart Brut Rosé is typically 45% Chardonnay and 55% Pinot, of which 18% is red wine.

Meanwhile, the prestige cuvée Dom Ruinart is made entirely with Grand Cru Chardonnay, predominantly from the Côte des Blancs (70%) and the remainder from the Montagne de Reims. And the Dom Ruinart Rosé has the same basis as the blanc, to which 15%-20% red wine (Pinot Noir from Verzenay and Verzy) is added.

The suggested retail prices for the current releases from Ruinart are as follows: