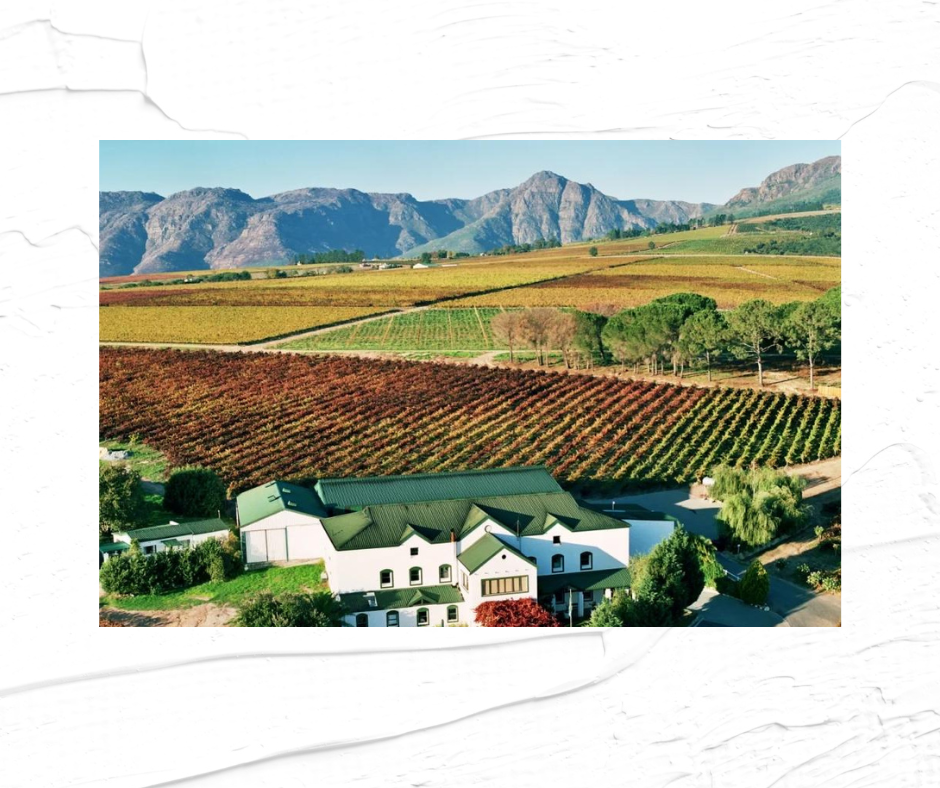 According to recent data released by Wines of South Africa (WoSA), export volumes dropped 5% year-on-year to 368.8 million litres of wine. Sales by value declined 2.9% to ZAR9.9bn (US$577m). WoSA advised that this was due to adverse weather and supply-chain disruption. 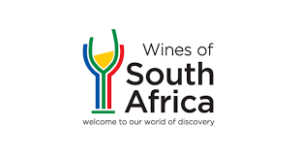 “The recovery of exports was hampered in 2022 by various factors out of the control of our producers,” WoSA CEO Siobhan Thompson said.

WoSA pointed to an “extended period of adverse weather conditions,” which hit the shipping port of Cape Town in April. In October, industrial action by port workers caused disruptions for two weeks that impacted the port’s export capacity.

South Africa’s largest wine market is the UK, which took in 96.9 million litres of wine in 2022, a rise of 5% on the previous year. However, the total value of exports to the UK dropped by 5% to ZAR2.4bn.

Germany, South Africa’s second-biggest export market, declined by 17% in value and by 9% in volume terms. WoSA attributed the results to inflation and “an emerging culture of drinking local wines”.

Exports to China fell by 38% in volume, accompanied by a decline in value of 26%. South African wines in the market had been showing “exponential growth” but China’s zero-Covid policy hit demand, WoSA said.

WoSA CEO, Siobhan Thompson comments “On a positive note, the image of South African wine continues to grow with South African wine being awarded various top accolades and ratings in a host of competitions and professional ratings. CapeWine2022, our premier industry showcasing, proved to be a major success and attracted top buyers, influencers and importers from around the globe and we hope to see the impact of this on exports going into 2023.”

view the infographic for further information pertaining to 2022 exports. 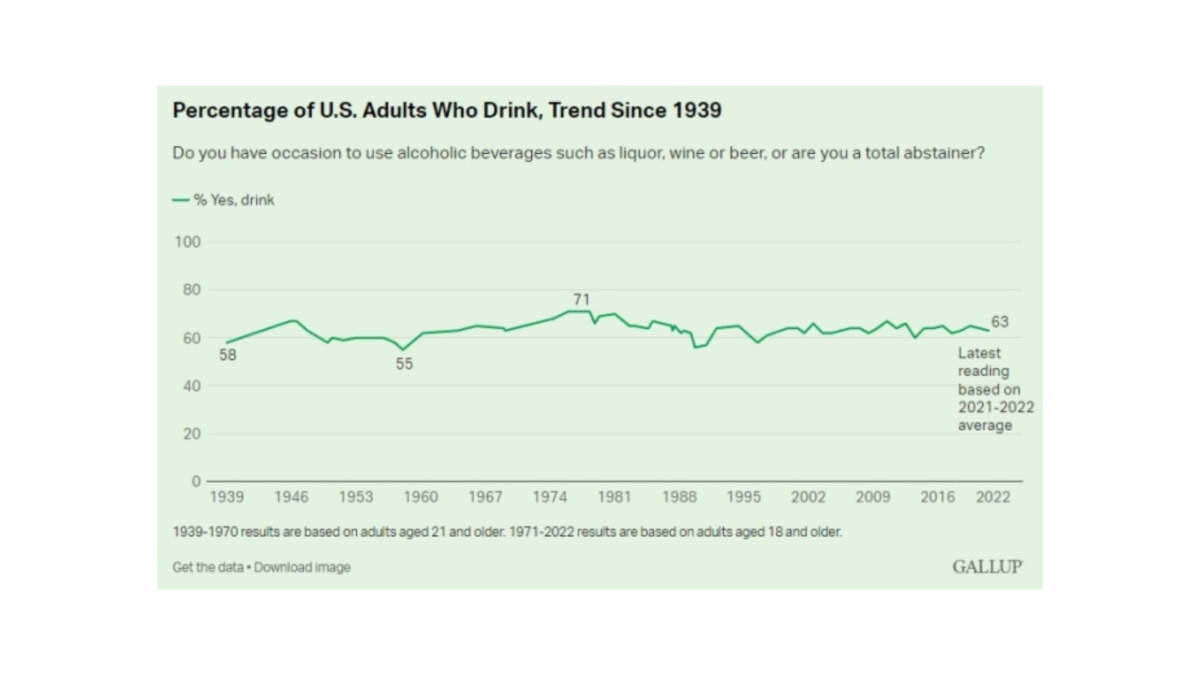 Here is the short answer…

The percentage of US adults [18 years and older] who drink alcohol averaged 63% over the last two years, whereas 36% described themselves as “total abstainers.” The drinking rate ticks up to 65% when narrowed to adults of legal drinking age, which is 21 and older nationwide.

Since 1939, Gallup has asked Americans whether they “have occasion to use alcoholic beverages such as liquor, wine or beer” or if they are “a total abstainer.” Across the trend, the percentage saying they drink has dipped as low as 55% (in 1958) and risen as high as 71% (in the 1970s). However, in recent decades, the U.S. drinking rate has consistently registered near the long-term average of 63%.

Drinking Varies Most by Financial Means

The drinking rate among U.S. adults differs more by household income than by any other standard demographic characteristic. According to the 2021-2022 data, 80% of adults aged 18 and older living in households earning $100,000 or more say they drink, far exceeding the 49% of those earning less than $40,000. The rate among middle-income earners falls about halfway between, at 63%.

Relatedly, drinking also differs by education, with college graduates (76%) and postgraduates (75%) the most likely to report they drink. This is followed by nearly two-thirds of those with some college education (65%) and about half of those who haven’t attended college (51%).

Religiosity Also a Factor in Likelihood That People Drink

Whether people drink also varies significantly by their religiosity. Adults who attend their church or other place of worship weekly (50%) are less likely than less-frequent attenders (63%) and nonadherents (69%) to say they drink.

By contrast, religious denomination is not a strong factor in use of alcohol. Protestants are the least-likely major religious category in the U.S. to say they ever drink alcohol. However, the 60% of Protestants who in 2021-2022 reported they drink is only modestly lower than the 68% among U.S. Catholics and 67% among those with no religious affiliation.

Men, Younger and White Adults More Likely to Drink Than Their Counterparts

In contrast to the wide variations seen by income and religiosity, alcohol consumption varies only slightly by gender, with 66% of men versus 61% of women saying they ever have occasion to drink.

Among the nation’s largest racial and ethnic groups, White adults aged 18 and older (68%) are more likely than Hispanic adults (59%) or Black adults (50%) to report they drink. A review of Gallup’s longer-term data confirm that White adults have been consistently more likely than Hispanic and Black adults to drink, while the rate among the last two groups has been statistically similar.

How Much Do Drinkers Consume?

Overall, U.S. drinkers reported consuming a modest amount of alcohol in 2022, averaging four drinks per week for all drinkers. The figure rises to six drinks per week on average for those who appear to be regular drinkers, defined as those who had at least one drink in the past week.

More specifically, when asked how many alcoholic drinks of any kind they had in the past seven days, a third of drinkers (34%) in 2022 said they had had none. About half (53%) said they had between one and seven drinks, while 12% reported consuming eight or more drinks, thus averaging more than one per day.

What Is Americans’ Drink of Choice?

For many years, beer was the strong favorite of U.S. drinkers, mentioned by close to half as the alcoholic beverage they most often drink. It still leads, but by a thinner, four-percentage-point margin over wine, 35% to 31%, according to the 2022 survey. Meanwhile, 30% favor liquor — a new high — and 3% have no preference. 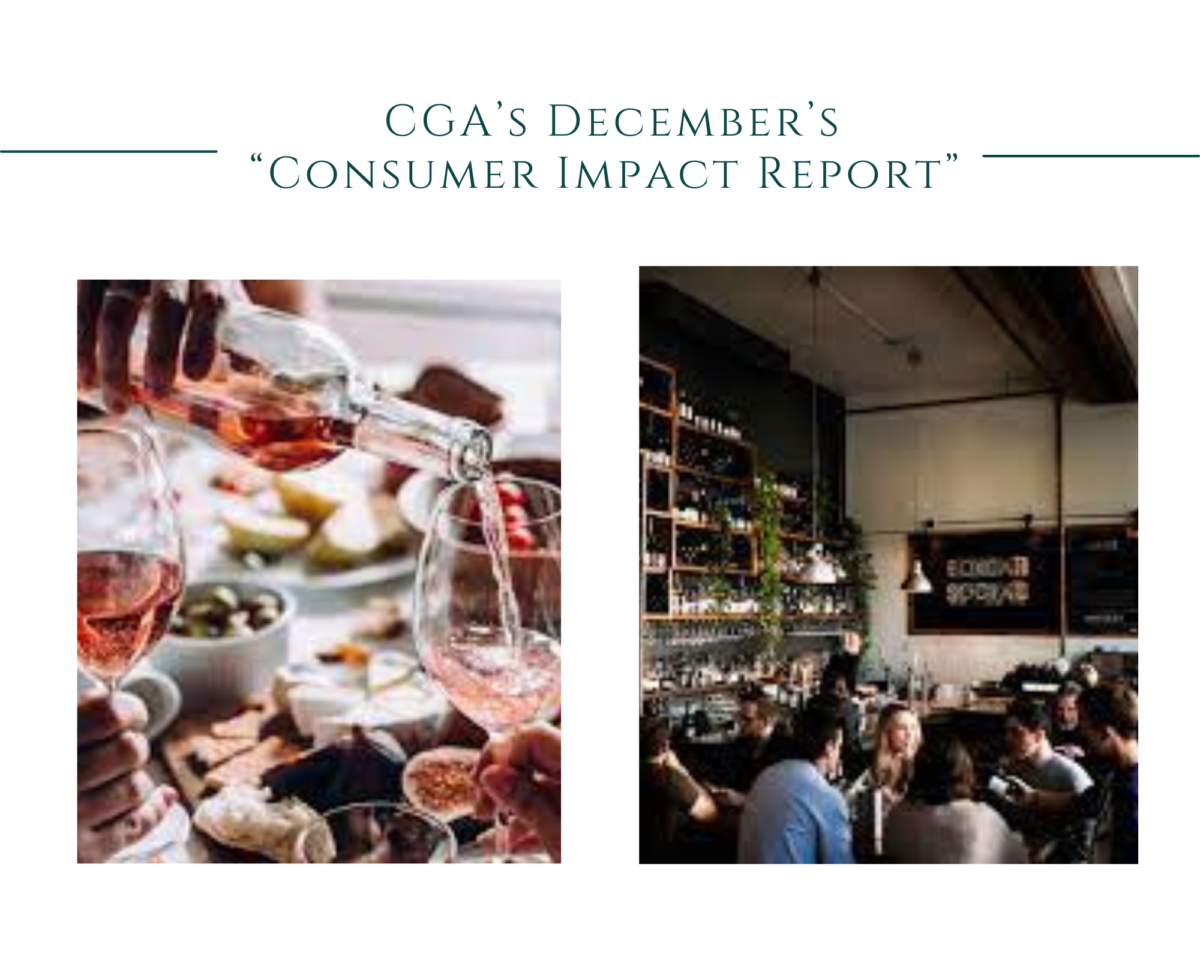 CGA by NielsenIQ’s latest consumer research reveals that bars and restaurants are essential for driving awareness of drinks brands, with 61% of consumers more likely to look for new brands in the on premise as opposed in stores and 54% stating they’ve made an in-store purchase of a brand that they first tried in the on premise.

CGA’s Consumer Impact report highlights 1,600 consumer behaviors across Florida, Texas, California and New York. The latest research highlights that the frequency of visits to the on premise have remained stable, with 4 in 5 consumers visiting bars and restaurants 3 or more times in the last three months. Plans for visiting also remain very positive with around 73% of US consumers planning to go out in the next weeks.

Consumers continue to seek out new experiences in bars and restaurants, with consumers more likely to first try a new Spirits or Beer brand in the on premise over an in-store purchase – underlining how important venues are in building brand awareness and encouraging trial.

Trial of new drinks brands in bars and restaurants is highly likely to compel consumers in their purchasing decisions in the off premise too – with 54% of consumers agreeing they have made a purchase in store of brands that they first tried in the on premise. 3 in 5 consumers also agree that they are likely to look for new brands in store if they’ve already tried them at a bar or restaurant.

Not only are on premise purchases informing in-store buying behaviors, they also help to build loyalty – with two thirds of consumers agreeing that if they try a new brand they like in a bar or restaurant, they will continue drinking it on subsequent visits.

Moving into the new year, almost 2 in 5 US consumers predict they will visit the on premise more or much more often than they did in 2022, while half plan to maintain their current frequency of visitation. A third of consumers predict their spend in bars and restaurants will increase over the next 12 months, with 2 in 5 consumers willing to spend more for better quality drinks compared to 2022 – providing significant opportunities for premium drinks brands. 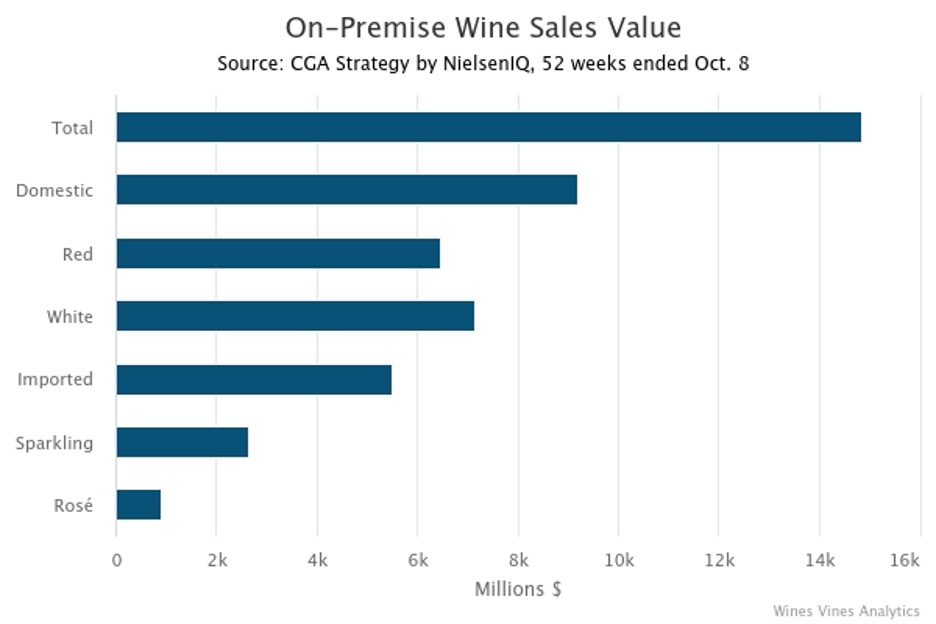 Wine sales in the US on-premise sector totaled $14.8 billion in the 52 weeks ended October 8, 2022 according to CGA Strategy by NielsenIQ.

Latest data from the market research firm CGA Strategy reflects a 22% increase over the same period in 2021, but growth is slowing as the on-premise market recovery continues.

The growth comes in a competitive market marked by fewer outlets and fewer choices for drinkers. CGA reports the number of fine dining outlets has decreased 4.1% between October 2021 to October 2022, while consumer surveys found 21 % of diners report they have noticed fewer menu items and 40 % of those say there are fewer wine options.

In a webinar last week, Andrew Hummel, CGA client Solutions Director for North America, said surveys of on-premise consumers consistently find 50% report they drink something different at restaurants and bars than what they enjoy at home. “It’s really important to understand the on-premise consumer and segment them differently from the off-premise consumer,” he further states.

In terms of the different types of on-premise wine consumers, 37% of those surveyed by CGA who are wine drinkers fall into the company’s “curious and on a budget” category which represents about 30% of all consumers. These restaurant and bar patrons are “moderately engaged,” typically visiting in the early evening and enjoying trying new drinks yet are price sensitive and attracted to values.

To help wine producers navigate a changing market, CGA developed a new report that offers a “360-degree view” of wine in the on-premise sector. This new report blends market data with consumer surveys and “user” data as well as a channel strategy analysis into what the firm describes as its most comprehensive analysis of the on-premise market for wine. “Whether teams are considering a new brand launch in the market or managing a portfolio of legacy wines, the report will provide a robust set of insights across relevant topics to help drinks suppliers win in the on-premise,” states Matthew Compton, CGA’s regional director of North America.

World wine production in 2022 is again expected to be slightly below average, with differences between the individual winegrowing zones and countries. The International Organisation of Vine and Wine (OIV) forecasts global production of between 257.5 and 262.3m. hl of wine and must in 2022. There will be regional differences in harvest volumes, but the market surplus will remain.

The average value of 259.9 mill. hl is about 1% below the previous year’s quantity. However, the OIV points out that no information is yet available from China and Russia.

Europe is the heart of global viticulture. The EU alone accounts for 60% of world wine production and production volume is expected to be average, with Italy, France, Romania and Germany, among others, reporting higher harvest volumes than last year. In contrast, Spain, Greece and Portugal have harvested rather low volumes.

In the USA, a slightly lower harvest volume than in 2021 has been reported; 23.1 mill. hl are expected. This would be 4% below the previous year and 6% below the 5-year average, the second lowest volume in the last five years.