Over 25,000 bottles of Champagne Lanson were sold over the two-week period at Wimbledon.

Each bottle sold came with its own Wimbledon-themed neoprene jacket, in either white, pink or purple, created specifically for this year’s event.

The 2013 tournament marked Lanson’s 25th anniversary of being the official Champagne of Wimbledon and it was announced during the championships that Lanson has signed on for another five years.

“It has been an incredible two weeks, and in all the years we’ve been here, this one goes down as a vintage year thanks to Andy Murray’s incredible performance. We’ll be sending him a few magnums to celebrate,” said Paul Beavis, managing director of Lanson International UK.

Lanson appropriately became the official Champagne supplier to Wimbledon in 1977, the last time there was a British singles winner at the event, when Virginia Wade won the women’s tournament.

The Cordon Rouge non-vintage, one of six bespoke bottles, was handed to the Queen today during the Royal Coronation Festival at Buckingham Palace. A second bottle will be auctioned for the Queen Elizabeth Scholarship Trust.

The 60th anniversary label was designed by Sally Mangum, a QEST awardee. 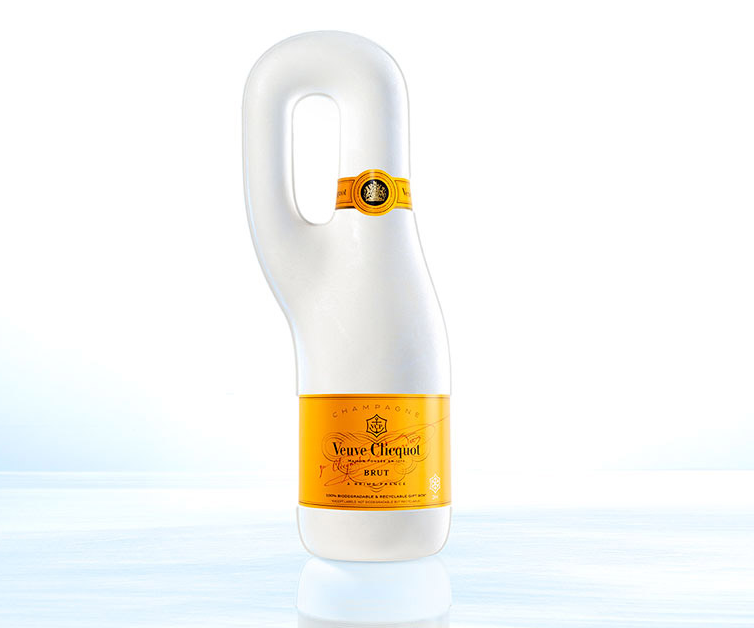 Veuve Clicquot has joined the biodegradable packaging revolution with a 100% biodegradable way to store a bottle of champagne, and keeping it chilled. “Naturally Clicquot” was created by designer Cédric Ragot using recyclable paper and potato starch.

With the isothermal properties, the packaging will keep the champagne chilled for up to 2 hours after it’s taken out of the ice bucket or refrigerator.

Champagne Lanson is celebrating 25 years as the official Champagne of Wimbledon tennis and is hoping for an exceptional year with up to 20,000 bottles expected to be drunk in the next two weeks.

Paul Beavis, managing director of Lanson UK said: ‘If the sun shines we are quite definitely looking at a bumper year.’

Lanson is introducing a strawberry Champagne cocktail, called Lanson Fraise, at the event and a range of cooling jackets styled as tennis shirts.

‘We are thrilled to be celebrating 25 years with Wimbledon and it is a very exciting time for us,’ said Beavis.

Lanson has enjoyed strong 2012 sales in UK due to Wimbledon and the Queen’s Jubilee.

Hôtel du Marc, Veuve Clicquot Ponsardin’s private mansion in Reims, France is opened to the public this weekend only: Saturday, June 15 and Sunday, June 16. Usually serving as private lodgings for invited guests of Veuve Clicquot, the 173-year-old neoclassical abode will open its doors for a series of exclusive tours as part of Les Journées Particulières, the LVMH Group’s heritage celebration.
Constructed in 1840 under the supervision of Édouard Werlé, successor to “The Grand Dame of Champagne” Madame Clicquot, Hôtel du Marc has served as a home away from home for guests of the brand—who come from all over the world for invite-only tastings—for almost two centuries.

After a four-year renovation by renowned Architect Bruno Moinard (known for his work with Cartier, and the auction rooms at Christie’s New York) to its original grandeur, Hôtel du Marc reopened in the fall of 2011.

Each room is designed with its own theme and backstory, for instance, the Uzès Room is named after Duchesse d’Uzés, Madame Clicquot’s granddaughter and pays tribute to Veuve Clicquot’s longstanding relationship with Italy, which goes back to 1772, the year of the brand’s founding when the first 60 bottles of Champagne were sent to Venice.

Louis Bohne, a Veuve Clicquot salesman who singlehandedly helped to turn Russia into one of the world’s thirstiest champagne consumers during the French invasion of 1812, also has a room named in his honor. The faux fur headboard is meant to symbolize protection from the harsh Russian winters, which are seen in the block of crystal that forms the bench at the foot of the bed.

There is innovative artwork abound, with commissioned pieces from celebrated artists as Pablo Reinoso, whose spaghetti bench occupies the second floor landing – my favorite!

One of the house’s most enviable features is, of course, its private wine cellar—home to thousands of bottles and several vintages of Veuve Clicquot La Grande Dame, one of the brand’s rarest blends.

Throughout the mansion, there are lots of fun and unexpected twists. In the library, there’s a stuffed ostrich named Nicole — named after Madame Clicquot.