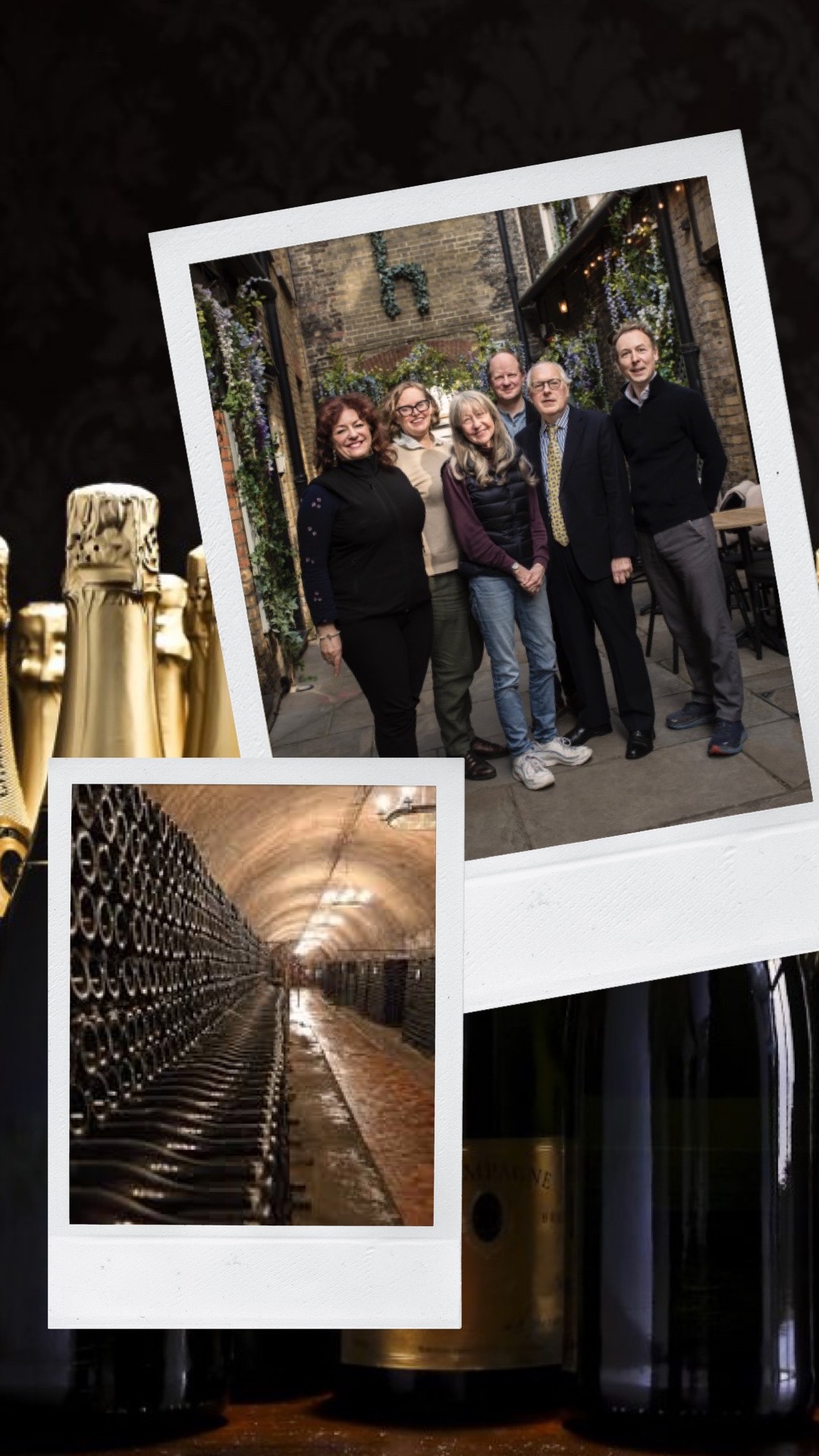 Now in its 11th year, The Champagne Masters has a long track-record of identifying not only the best in the category, but also the strengths and weakness of Champagne. In terms of unearthing the stars of Champagne in 2022, the judges picked out over 40 exceptional bottles. Drinks Business believes that it might have been the biggest competition that they have ever hosted.

Brut NV
Brut NV was the largest sub-category by volume and the standard of Brut NV being made today is excellent (according to the judges); a product of better viticulture, pressing, cleaner juices, more reserve wines, longer times spent ageing on/off the lees, improved bottling procedures, along with lower dosages. Today’s Brut NV tends to mix depth and complexity with precision. At their best, these are layered wines, with honeyed notes, along with fresh fruit, and nutty, bready interest, along with dry and bright edge, ensuring that they serve that aperitif moment – for which they are crafted – brilliantly!

A benchmark in the competitive Brut NV sector is Piper-Heidsieck, especially its drier ‘Essential’, with a 5g/l dosage, although Lanson (both for its ‘Le Black and Le Green’ labels) is proving hard to beat, with its nutty and citric style. Also, Moët & Chandon garnered a Gold for its Brut Impérial, and, as the best-selling Champagne in the world, this fizz proves that it’s possible to be big and fine with sparkling wine. Indeed, scale may be preferable, giving one access to a wide range of wines for blending – a key for not just complexity and balance, but stylistic consistency as well.

Commenting on this sector of the market, Champagne Masters judge, Jonathan Pedley MW described it as a “mixed bag with a handful of delicious wines mixed in with plenty of basic stuff.” Continuing he said, “The latter were often young, raw and lacking complexity. The better wines had maturity and complexity – doubtless derived from the judicious use of reserve wines and extended lees ageing.”

Agreeing, fellow judges Patricia Stefanowicz MW observed that “Champagne will never be inexpensive and finding a number of exciting wines at the lower end of the £30-50 bracket with appealing fruit and fresh croissant or brioche accents, was a delight. Above £50 the Brut NV wines are excellent, and so they should be.”

Vintage
The first Masters was awarded in this category – an accolade reserved for those wines that are exceptional – with producers Joseph Perrier, Piper-Heidsieck and Henriot the sources of “wow-factor” fizz, to use Stefanowicz’s description for the best samples. Taking in harvests from 2014 back to 2006, it was notable how good the 2012s are, while the 2014s were showing their quality potential too. Recording the presence of “gems”; “A cluster of wines showed evidence of having been vinified from top quality fruit and then aged to add complexity and harmony,” Pedley said that this part of the Champagne offer is where the quality-to-price ratio seems to be highest. By way of explanation for this, he said, “With many houses focusing on Prestige Cuvées and other trendy things like Blanc de Blancs, standard Vintage seems to have become a quiet bye water where the consumer can pick up some excellent wines for sensible prices.”

Prestige Cuvée
Up next with the top-end expressions, Prestige Cuvée Champagne, there was more outstanding wines from the 2012 harvest, but also the first rate 2008, and, for a younger fizz, the relatively underrated 2013 vintage. Master-level quality was tasted from Deutz, Perrier-Jouët and Rare, as well as the multi-vintage flagship from Laurent-Perrier, called Grand Siecle, now carrying an edition number so one can find out the base wines and gauge the age of the fizz. Other delicious wines – if not quite Masters – hailed from some grower-cooperative producers, with Nicolas Feuillatte, Palmer and Castelnau picking up Golds, the latter for an exciting late-release from 2000 in magnum. Underrated names for greatness in this upmarket sphere included GH Mumm – it’s Lalou 2006 is delicious – and Pommery, whose Cuvée Louise is certainly a connoisseur’s prestige cuvée. Speaking generally about this category, Pedley recorded “glorious honeyed aromas and great length on the palate,” and “angina inducing prices to match.”

Blanc de Blancs
Testament to the increasing demand for Blanc de Blancs, this was one of the biggest sectors of this year’s Champagne Masters, and home to some fantastic wines, notably those from Henriot and Telmont, but also Mumm and Perrier-Jouët, Deutz and Delamotte, along with Piper-Heidsieck and Ayala, and Besserat de Bellefon with its grand cru bottling. Clearly impressed, Stefanowicz described the Champagnes as “pristine”, with “racy acidity”. Pedley recorded a more variable standard, and while excited by “butter cream” notes in one sample, said that some others seemed “simple”, with “an absence of leesy complexity and maturity.”

Such wines were, however, better than the blanc de noirs, which was “a small but slightly disappointing flight, marked by a couple of wines that were rather vegetal,” said Pedley, with the judges agreeing that Champagne does undoubtedly benefit from the addition of Chardonnay to the blend.

Rose
Finishing with rosé, it was agreed upon by the tasters that, with a few exceptions – such as the excellent samples from Laurent-Perrier, Perrier-Jouët, Pommery, Joseph Perrier and Besserat de Bellefon – to quote Pedley, “this was the biggest disappointment of the day”. Commenting that “Clearly making good Rosé Champagne is not as easy as a lot of people think,” he then recorded two types of poorer-scoring pink fizz: “At one end of the scale there were wines that were raw and simple, at the other end wines that were tired and lacking freshness.”

Stefanowicz felt similarly, commenting, “Whilst the range of colours was visual enchantment, many of the wines simply do not deliver on the nose and palate. And, of course, they are mostly expensive. That said, there were a few hidden gems. But, particularly at more than £30, I’d have expected much more definition and refinement than some of the wines delivered.”

Concluding on this category in the context of the overall competition, Pedley stated, “It is a bold thing to say, but if we steered consumers away from Rosé Champagne and towards standard Vintage we would be doing them a huge favour.”

List of the winners can be found here:
https://www.theglobalmasters.co.uk/awards/the-champagne-masters-2022/ 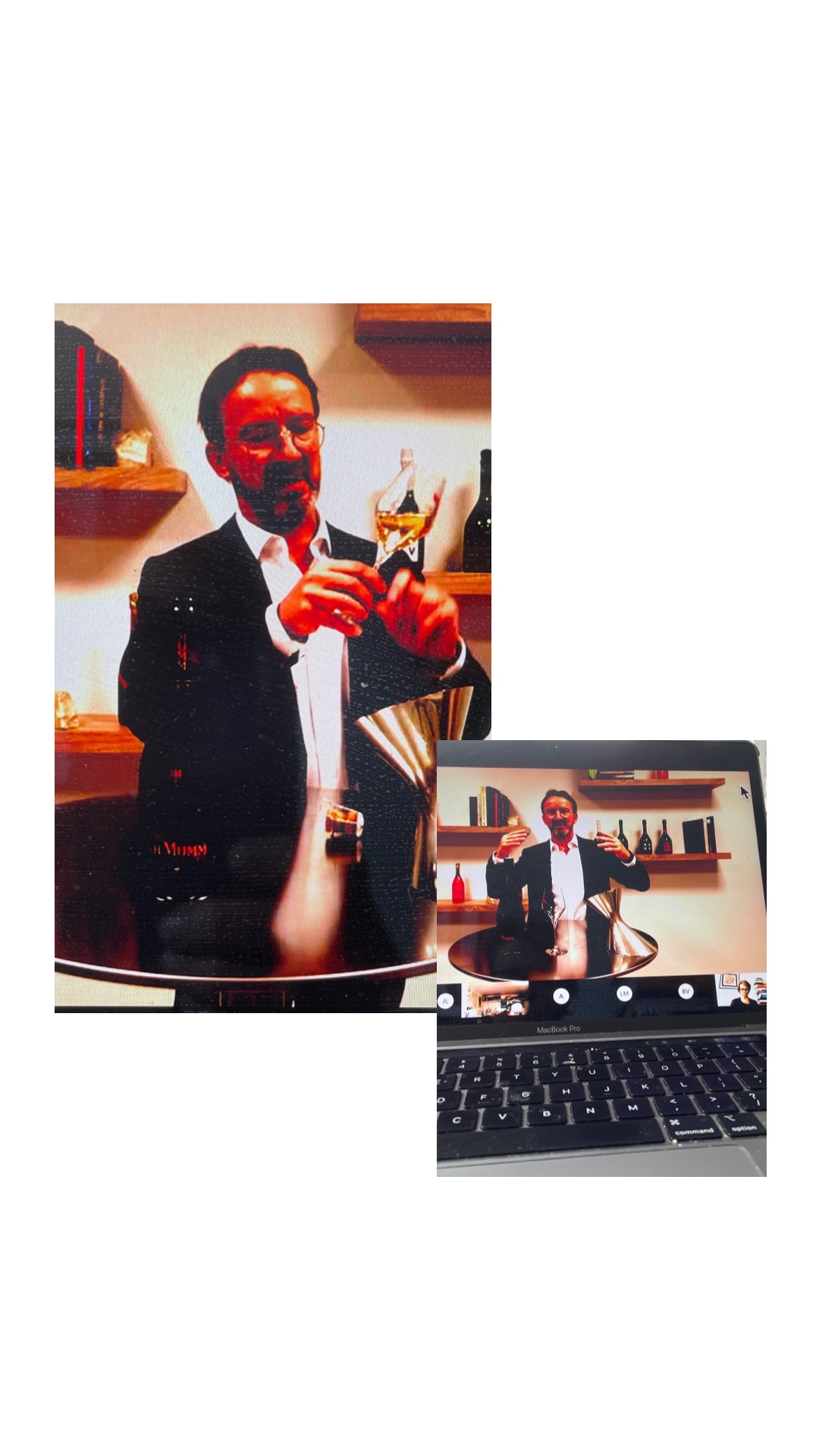 Yesterday I participated in a virtual tasting with Cellar Master Laurent Fresnet of Maison Mumm to celebrate the release of Mumm Millésimé 2015. It was wonderful opportunity to see Laurent again and engage in the online conversation.  Unfortunately, I couldn’t participate in the tasting portion (at this time) my bottle was stuck at customs.

This vintage was aged for five years in Maison Mumm’s cellars beneath the city of Reims.

Maison Mumm’s style reveals the essence of Pinot Noir – with its power and rich, elegant fruit, the black grape takes pride of place in the House’s classic blends, to which Chardonnay and Meunier grapes add their inimitable floral and fruity notes.

Tasting Notes:  watch this space for my tasting notes in the next few weeks. 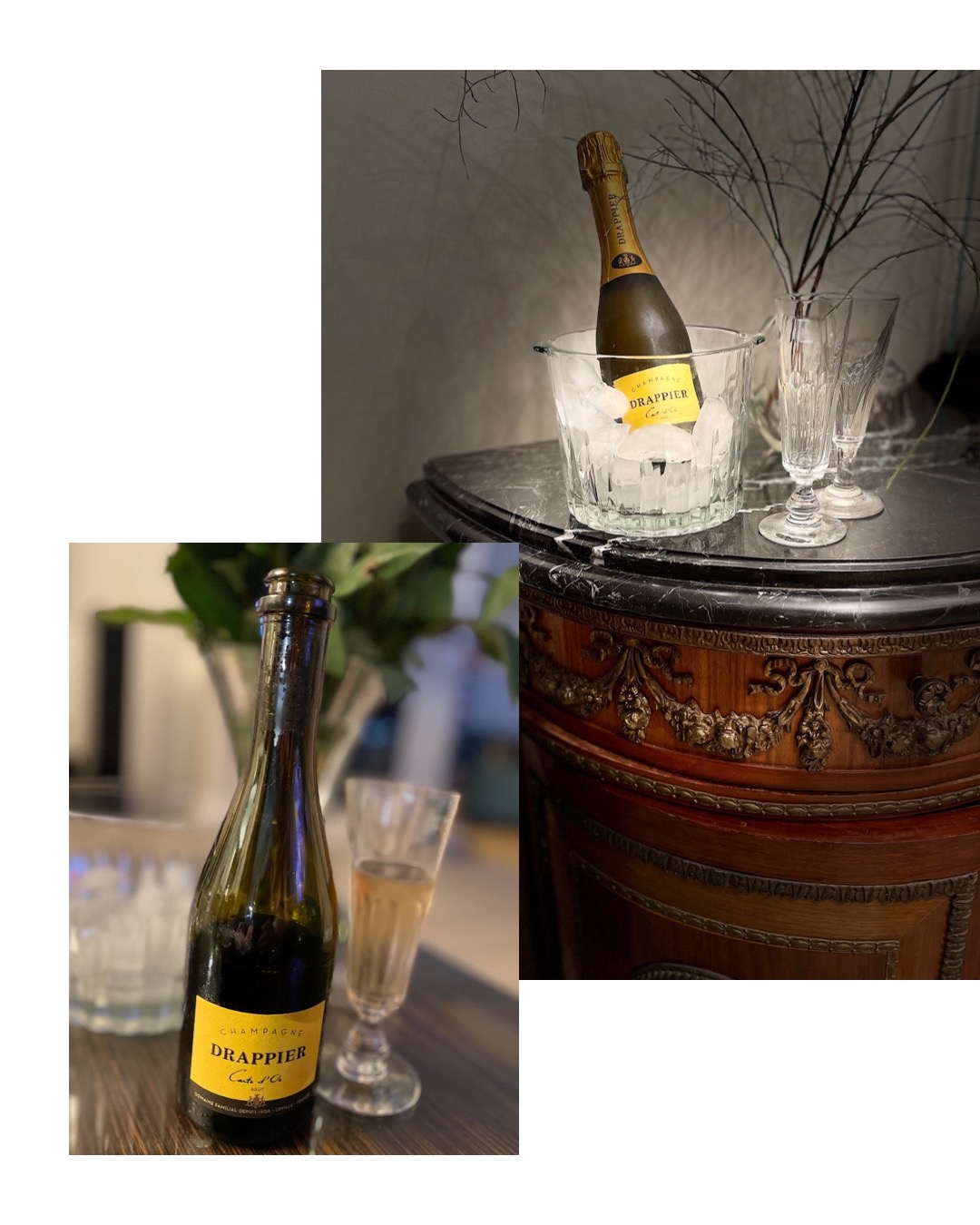 Champagne Drappier is one of my favourite Aube producers in many ways. I’m happy to say that I have personally met Andre, Michel, and Charline on numerous occasions, along with my son, daughter and daughter-in-law. This wonderful family all left warm and memorable impressions.

This dynamic independent house is currently run by the charmingly and hospitable 7th and 8th generations: father Michel, daughter Charline and sons Hugo and Antoine.

Drappier is based in Urville in the Côte des Bar comes has a wide range of rich lush full-flavoured cuvees and also make still wines.
Fact: Champagne Drappier was Charles de Gaulle’s favourite Champagne and Madame de Gaulle was a great friend of the Drappier family.

The house of Drappier is unusual in many ways: they are neither a Grands Marques house, nor a grower; they own 60 hectares, so they are technically both a domaine and negociant house. Drappier is also one of the most experimental in Aube. They often use no dosage, they are pioneering ‘sans soufre’ no sulphur fizz (sulphur sensitivity runs in the family) and focus on organic viticulture.

The cuvée Carte d’Or expresses the identity of the house directed by the family since 1808.

Tasting Notes:
The Drappier Carte d’Or expresses all the aromas of Pinot Noir; this constitutes at least 80% of the blend, along with Chardonnay 15 %, and Pinot Meunier 5 %.

This champagne has a great aromatic richness of melon, apple and red fruits. The palate is intense, with notes of apple, peaches and quince wrapped in a red-fruit veil. It’s full-bodied and long with a lovely texture, and complex mouthfeel. 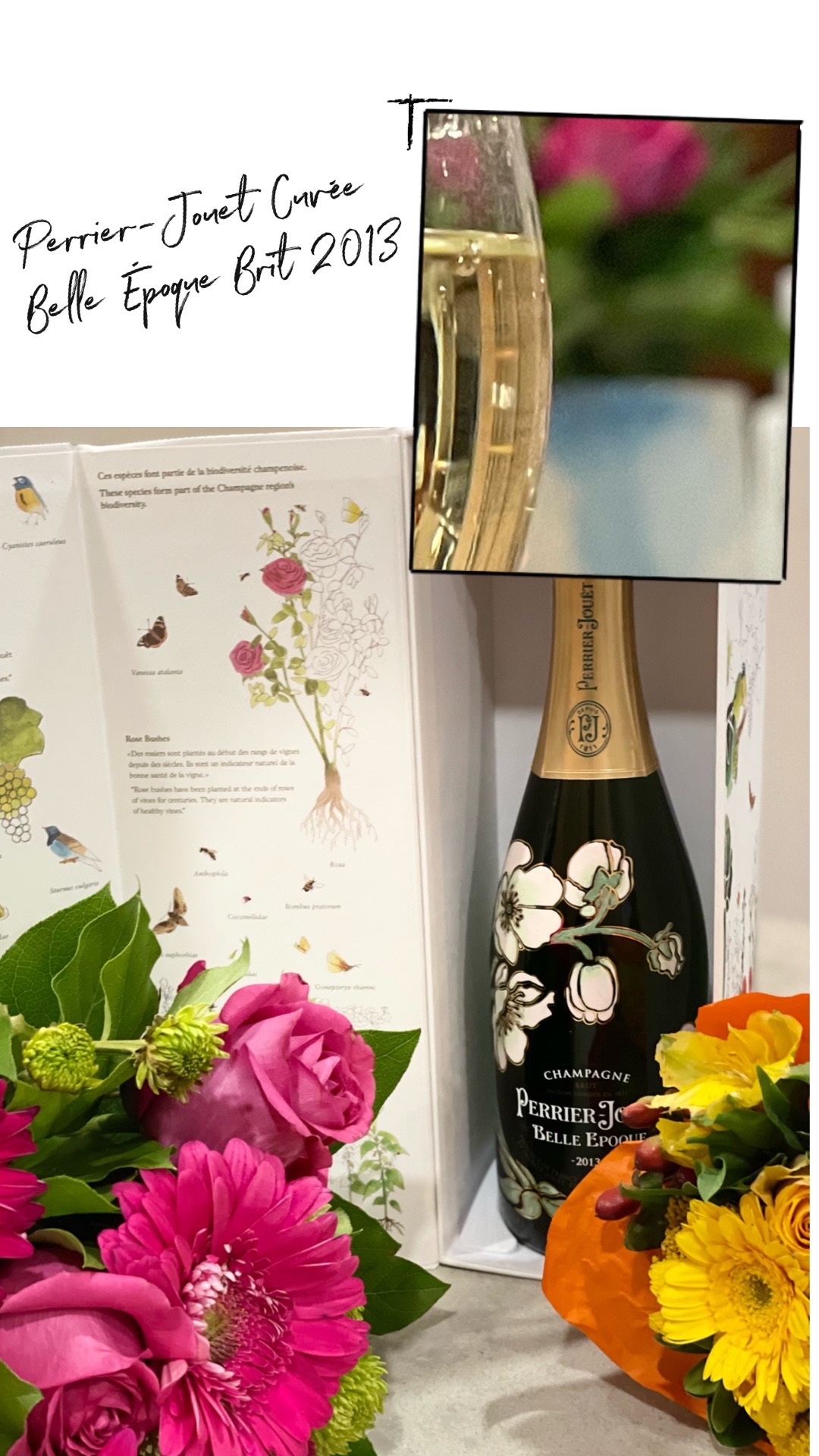 Blend
Made from a blend of 50% grand cru Chardonnay, 45% grand cru Pinot Noir and 5% Meunier, the 2013 vintage embodies the delicate floral style that has come to define the house.

2013 Weather
2013 was a cool year, with late flowering in July pushing back the start of the harvest to September 30. It was a particularly good year for Chardonnay.

“Lime blossom expresses the character, personality and texture of the 2013 vintage”, she said, adding that the fizz has a “delicate salinity” to it.

Serving and Pairing
Perrier-Jouët recommends serving the Champagne at 12°C and enjoying it as an apéritif or paired with the likes of Dover sole and grilled turbot.

Founded in 1811 in Epernay, Perrier-Jouët is known for its elegant, floral Champagnes that celebrate the delicacy of Chardonnay. The house owns 65 hectares of vineyards, including 55ha of grand cru sites. Its prestige cuvée, Belle Epoque, launched in 1969 at Maxim’s in Paris with the 1964 vintage. The debut vintage of Belle Epoque was practically a blanc de blancs, composed of 90% Chardonnay.

Tasting Notes
Pale gold, clear and luminous with aromas of ripe, juicy pear, hints of citrus and green pepper; a subtle salinity; generous, lively attack with a lush, creamy texture; beautiful floral notes of blossoms, complemented with pear, mandarin, and some grapefruit zest through to a long, expansive finish. 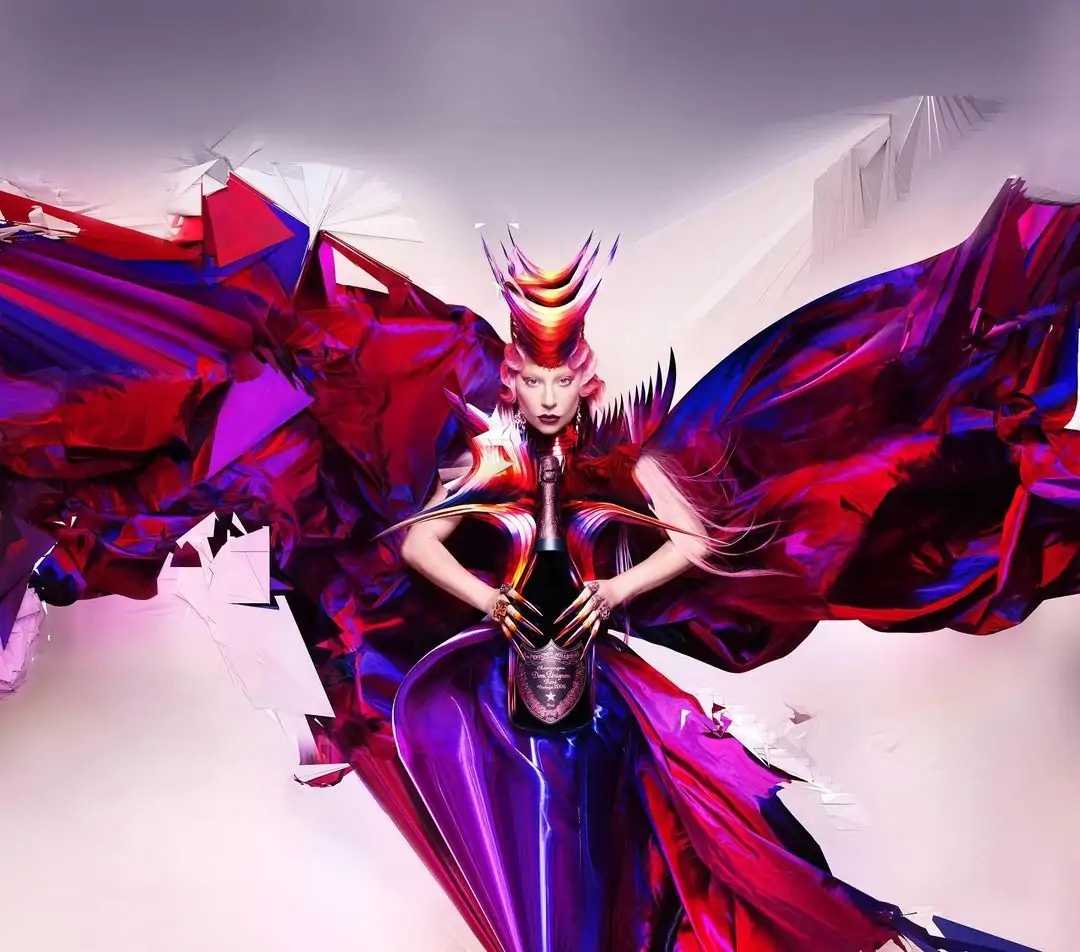