The opening dates of the 2019 harvest in Champagne have been announced, for all the villages and departments of the appellation.

The CIVC states: “The 2019 campaign has been marked by climatic shocks, with cool and humid periods alternating with hot and sometimes hot periods. Since the buds hatched, nature and some of the vine’s enemies have drained some of the initial harvest potential. Compared to other vintages, this year the grapes have more acidity and less color to the same degree (sugar richness). Aromatic maturity will therefore probably only be reached with high potential degrees, in the order of 10.5% flight. for Chardonnays and Black Pinots and 10% vol. for Meuniers”

The harvest, which began in Champagne this week, looks to be lower than in previous years. The vines of Champagne saw everything this year, from cold and rain to drought and heat, with the previous record for sunshine hours broken in February.

Spring frosts between early April and early May destroyed the vine buds across around 1,000 ha of vineyards, equivalent to three percent of the vineyard area. The heat and drought periods that began in June did not affect the vines.

The grapes from vintage 2019 show high acidity, but balanced color and sugar. In order to achieve the aromatic ripeness desired in Champagne, the grapes require a minimum alcohol content of 10.5% by volume for Chardonnay and Pinot Noir and 10.0% by volume for Meunier.

Champagne harvesting is done exclusively by hand to guarantee the integrity of the fruit for whole cluster pressing. The harvest is supported by 120,000 workers. 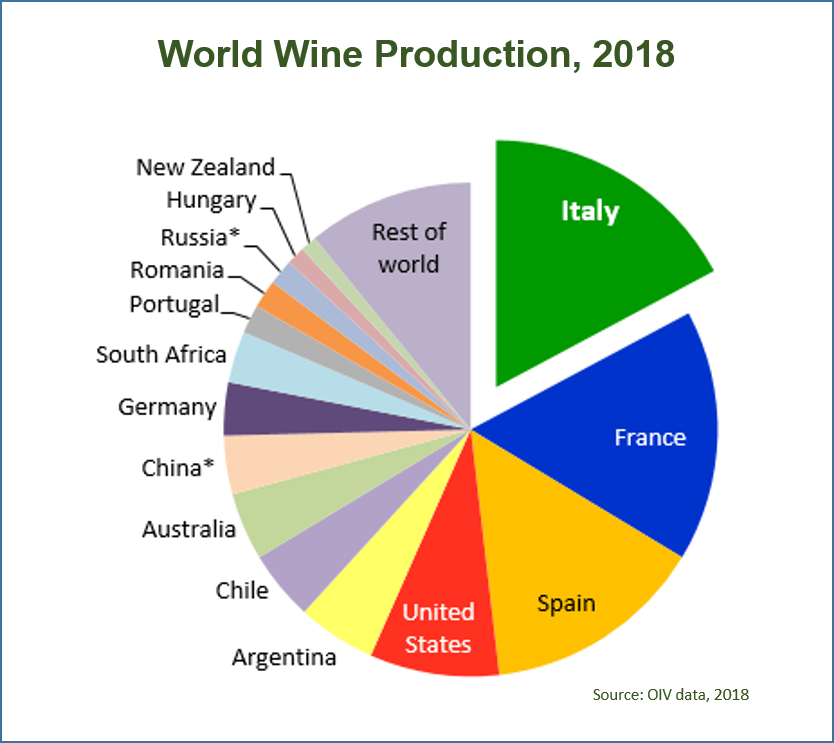 World wine production reached a Record high in 2018 in a clear departure from the historically low production of 2017, but consumption stabilized, according to  Pau Roca, the International Organisation of Vine and Wine (OIV) Director General in his presentation April 11, 2019

Global wine output for 2018 rose 17% to 292.3 million hectoliters (mhl) which was close to the exceptionally high level of 2004, driven by Italy, France, and Spain.  These three countries recording output at least 13% above their five-year averages states Roca.

Italy confirmed its position as the world’s largest producer with 54.8mhl, followed by France with 49.1mhl and Spain, which produced 44.4mhl.

Britain recorded a 3.1% drop in consumption to 12.3mhl, while mainland China recorded the biggest decrease in consumption among the world’s top 20 largest wine consumers, down 6.6% to 18mhl.

The slight decrease could be due to extreme weather in Europe, including drought and storms.

In terms of global consumption, 246mhl was consumed in 2018 compared with 246.7mhl in 2017, the OIV estimated, adding estimates were tentative due to limited data.

Wine exports in 2018 continued to be largely dominated by Spain, Italy, and France, which together accounted for more than 50% of the global market by volume, equating to 54.8mhl.

Spain continued to be the biggest exporter by volume with 20.9mhl, representing 19.4% of the global market. France was the biggest world exporter by value, with €9.3 billion exported in 2018.

Bottled wines made up 70% of the total value of wines exported in 2018. By value, sparkling wines accounted for 20% of the global market, despite representing just 9% of the total volume exported.

The OIV the total world area under vines at 7.4mha, which is almost equivalent to that of 2017.

The Champagne Harvest begins on August 21. The region has had a year 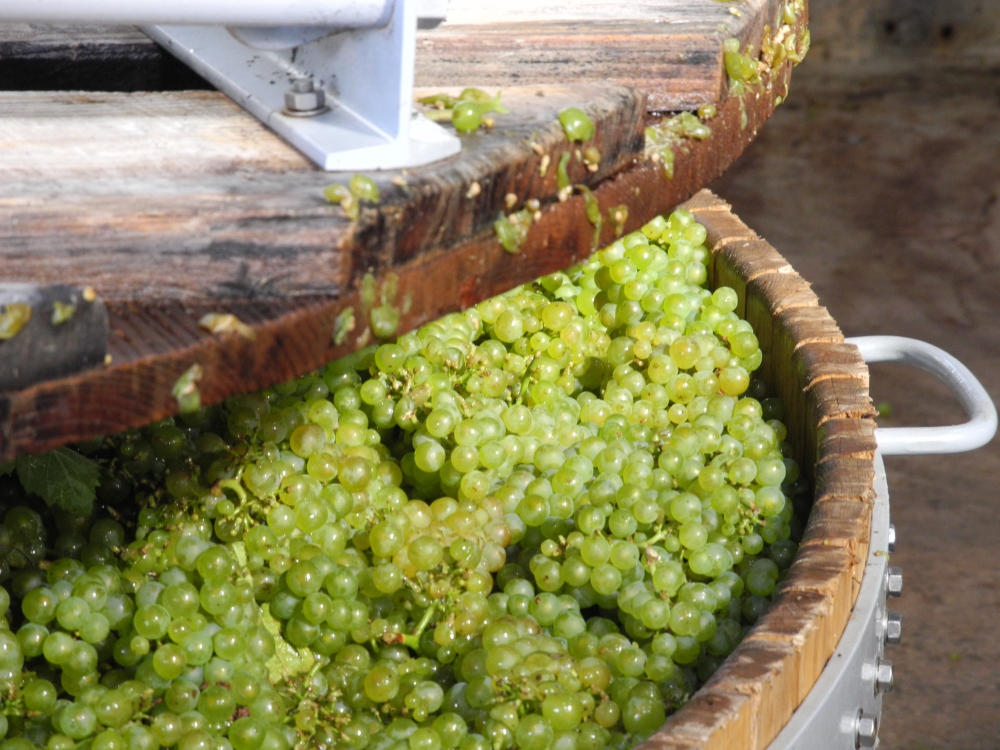 The Champagne Harvest begins on August 21. The region has had a year of extreme weather. Growers and houses saw record winter rainfall, with 345mm from November 2017 to January 2018. This beats the previous high of 338mm which was set in 1965, according to the Comité. A prolonged, cold winter has given way to good weather with flowering early June along with above average temperatures and sunshine hours.

Optimism around the 2018 vintage is high, said the Comité, which has set yields as 10,800kg per hectare.

Yields are set with one eye on the market. There is an assumption that global Champagne sales in 2018 will not grow significantly versus 2017 in volume terms, albeit exports were expected to lead any increase.

In the last 15 years, 2018 will be the fifth vintage. Global warming is also a local reality that Champagne growers and houses have taken into account.

Expecting stable sales in 2018 and a slight growth over the next few years (especially in the export markets, which now account for more than 50% of the total shipments), Champagne growers and houses agreed today to set the available yield at 10,800 kg/ha, the same level as in 2017. This volume fills the needs of the Champagne producers and maintains a balanced overall stock level.

This harvest is expected to be generous in volume and of good quality. It should also make it possible to reconstitute the Champagne reserve, widely used in the last two years. 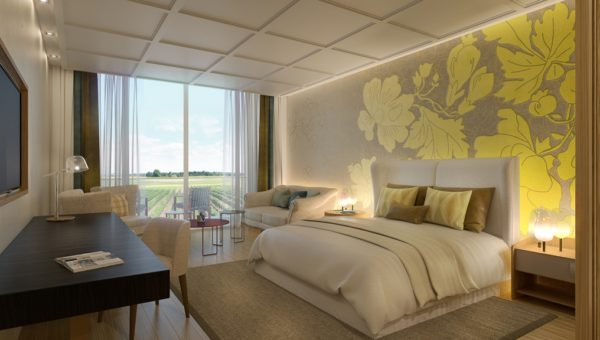 Embracing the lush bounty of the champagne houses and the surrounding UNESCO World Heritage sites, guests will have exclusive access to private Champagne houses, harvesting sessions with local wine producers and tastings personally curated by the in-house concierge team.

The Royal Champagne Hotel & Spa boasts an enviable location right in the middle of the vineyards that stripe the hills of Epernay, the capital of Champagne, and the historic villages of Champillon and Hautvillers of Dom Perignon fame. Reimagining a wine-country retreat for all seasons, local Reims-based architect Giovanni Pace has designed the property in the style of a contemporary amphitheatre, incorporating the original 19th Century Post House where it is said that King Charles X of France stopped over before heading to Reims for his coronation.

‘Champagne’ rooms start at £489.92 per night feature a king-size bed and private terrace.

The top tier ‘Josephine’ suite meanwhile, will set you back £1,068.71 a night and boasts a sitting room and balcony overlooking vineyards.

Each of the 49 rooms in the 16,000 square foot space features Hermès bath products.

The original property has been closed since 2014 after it was acquired by Boston-based Champagne Hospitality collection, a group of boutique luxury hotels and spas that includes the award-winning Le Barthelemy Hotel & Spa in St. Barths. The hotel is led by Nicolas Béliard, formerly General Manager of the Peninsula Paris.

Two-star Michelin chef Jean-Denis Rieubland is the Royal Champagne Hotel & Spa’s Executive Chef, where he leads the two gastronomic dining experiences – a gourmet dining room, Le Royal, and a more casual, all-day restaurant, Bellevue. Formerly Executive Chef of Le Chantecler at the Negresco Hotel in Nice, Chef Rieubland brings the highest level of gastronomy to Royal Champagne, where he will preserve French ‘know-how’ while injecting a contemporary touch. Rieubland’s cuisine is influenced by the local surroundings, working closely with farm producers of the region. He will also be developing a Chef’s garden on a large terrace overlooking the hills of Épernay. 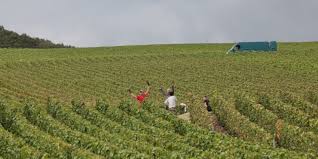