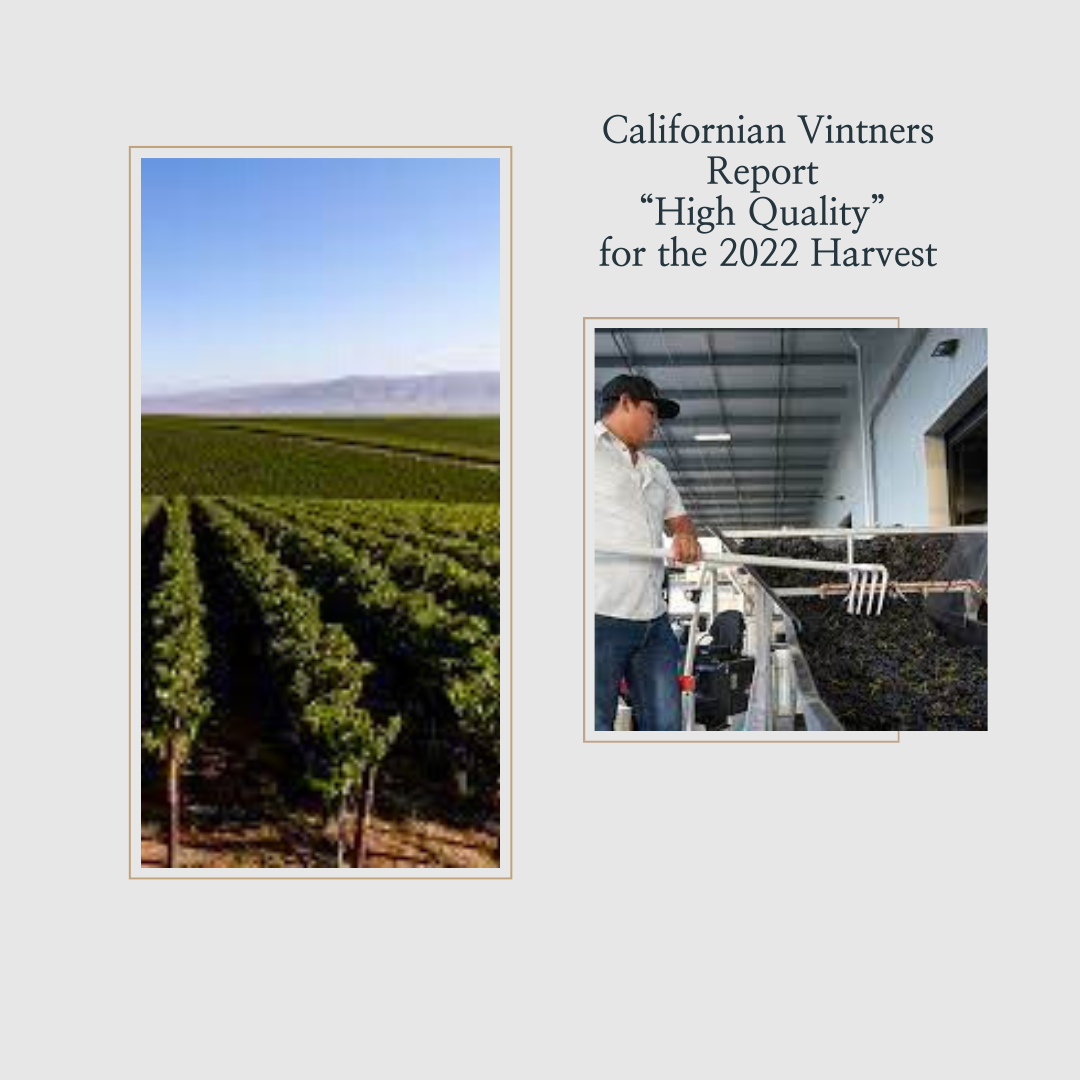 The California Vintners Report came out this week and described this year as “a tale of two harvests”, with the heatwave in the week around Labor Day dividing the season into earlier and later picks. . Besides some of the “curve balls” one winemaker states the quality was “off the charts”

The summer growing season was ideal on the North Coast, the report said, until the late August heatwave accelerated the harvest and reduced yields in many places. Mendocino, however, saw yields up in 2019, because of the cool spring and milder-than-normal temperatures, even though the extended heat wave and limited water resources for irrigation proved challenging during the harvest.

Meanwhile, Lodi and the Sierra Foothills saw some late frost after a mild spring “dramatically” reduced the size of the crop.

There was good news from Napa Valley, which recorded excellent quality. More than 20 inches of rain fell in October and December 2021, bucking the years of drought seen across the region, which was followed by dry conditions from January until March. The Spring was mild and cool, but the Labor Day heatwave sent temperatures soaring into triple digits – up t0 110 -118 degrees in some places – for nearly a week, although cools nights helped to temper this and allows the vines to recharge.

This caused ripening to accelerate throughout the valley, and picking began earlier-than-average for many varieties, although growers had to use multiple techniques to help vines ride out the heat, where unripe grapes had been left to hang. There was some dehydration though, resulting in lower yields but greater concentration and flavor intensity, the report said.

Nate Weis, vice president of winegrowing at Silver Oak and Twomey Cellars in the Napa Valley said 2022 was likely to be “a pretty intense vintage — concentrated and powerful”, with particularly Pinot Noir from the Russian River, Anderson Valley and Santa Lucia Highlands, and good Merlot and Cabernet Franc. “The quality,” he said, “is off the charts.”

Duckhorn Vineyards’s vice president of winemaking Renée Ary noted the estate’s Cabernet Franc and Petit Verdot were “some of the best ever and the Chardonnays are bright, balanced and focused”, she said.

“Given the range of ripeness, blending will be important for the 2022 vintage as we balance our early and later picks.”

Meanwhile, in Sonoma County, limited rainfall, early season frost, warm spring and an early summer proved to have no ill effects, although some yields were lighter than average. However, the report noted that “fruit quality thus far is stunning and the overall smaller berry and cluster sizes point to a stellar 2022 vintage… [with] vintners… reporting wonderful concentration and flavor in the wines.”

Lisa Amaroli, director of winemaking at Benziger Family Winery in Glen Ellen, Sonoma County said it was “one for the record books”.

It comes as California’s Wine Institute has begun a new push to increase Californian wine exports – part of its ten-year strategy to grow US wine export sales to more than $2.5 billion by 2030.

…it transports you to another time period and location..

….you become engrossed in the plot…

Check out the official trailer and see for yourself ….https://lnkd.in/g-uEY8Ag 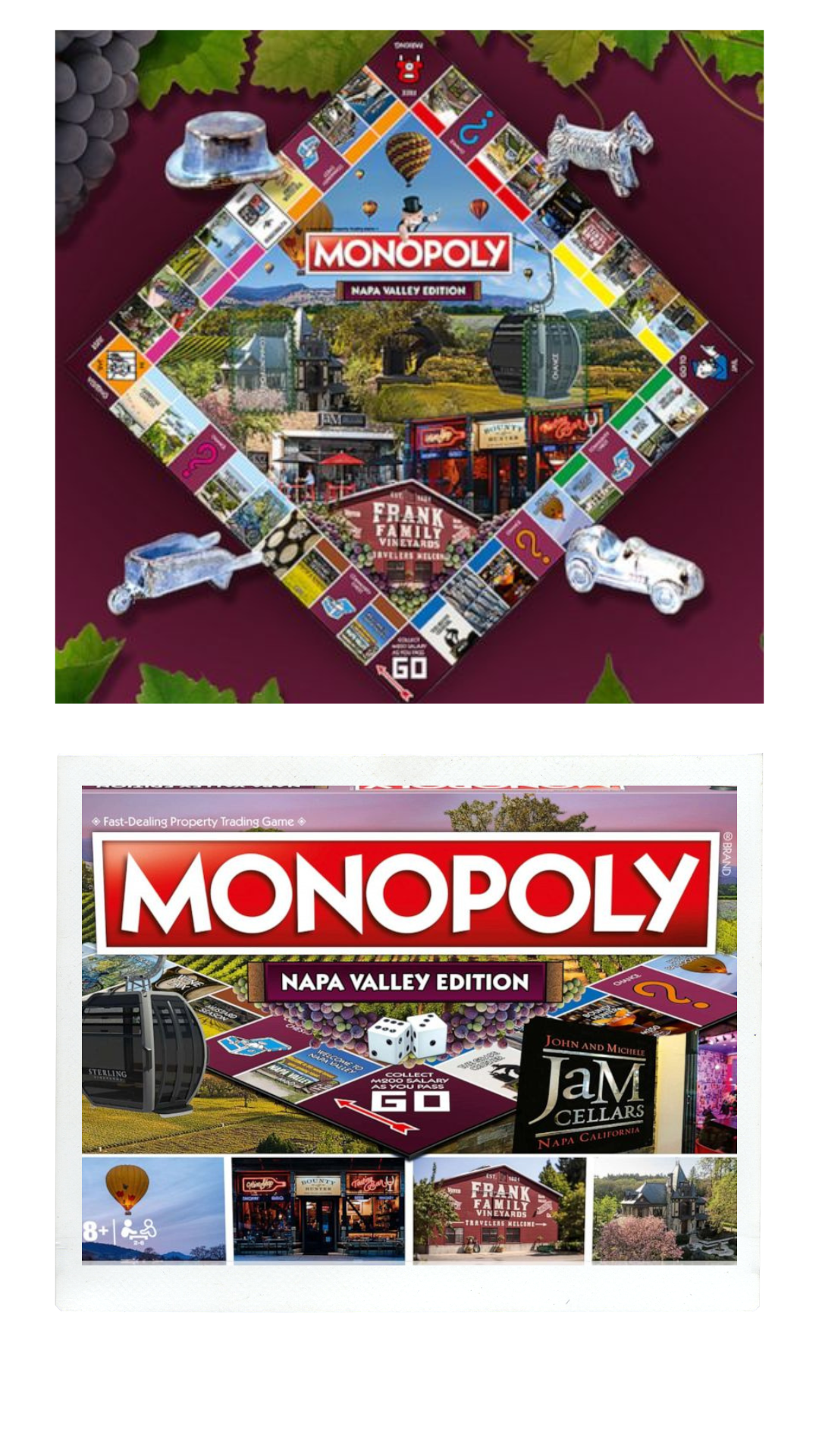 This version of the game replaces famous Atlantic City squares (from Boardwalk to Park Place) with representations of much-loved Napa Valley cultural sites, historic landmarks, and time-honored businesses, alongside customized Community Chest and Chance playing cards to ensure each detail of the game pays homage to the iconic wine region destination.

Napa Valley is well known for its iconic wineries, Michelin-starred restaurants and stunning views from the valley to the Mayacamas mountains.

Napa Cellars, an Oakville tasting room and winery deeply rooted in the heart of Napa Valley for nearly 50 years, is one of the properties featured on the board. Beyond its square between “Free Parking” and “Chance” spaces on the Napa Valley edition of the iconic MONOPOLY board, the winery can be found on a Chance playing card, which reads “The sun is shining, and Napa Cellars is calling. Make a reservation for a picnic amongst the vines. Pay 150.” Napa Cellars can also be found on a Community Chest playing card, which reads: “Napa Cellars consulted you to craft the next vintage. Collect 200.”  Other wineries featured include Beringer Vineyards, Sterling Vineyards, Frank Family Vineyards, and Hall Wines.

“We’re thrilled to launch MONOPOLY Napa Valley Edition in time for the holidays and to celebrate one of the most beloved, culturally rich and geographically beautiful wine regions in the world. We’ve spent months creating a portrayal of the area’s dynamic communities that we hope locals and visitors alike will enjoy for years to come,” says Jennifer Tripsea, a representative from Top Trumps USA. “We’ve incorporated important feedback from locals to truly make this a fun and engaging game for Napa Valley residents and beyond.”

The Monopoly Napa Valley Edition is available for $39.95 USD on Amazon, CVS and www.toptrumps.us. The game is also for sale in several local retailers, including Napa Cellars’ Oakville tasting room along historic Highway 29. 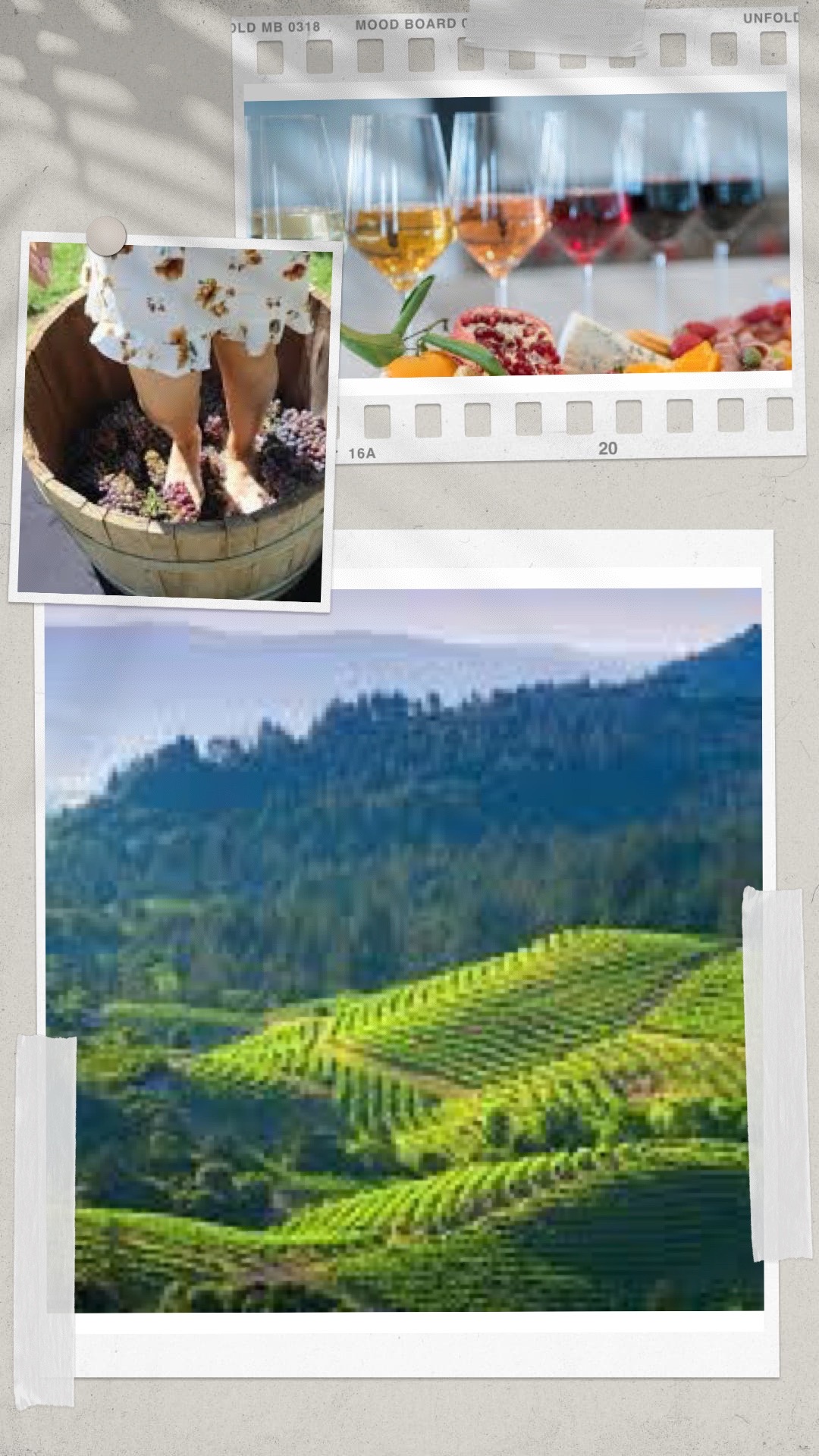 September is “California Wine Month” this is the time to celebrate the annual harvest and raise a glass to their vibrant wine community.

California’s wine industry has played a vital role in the state’s culture and economy for over 250 years. California makes up 81% of wine production in the United States and 95% of exports. Within the state’s 147 distinct winegrowing regions are 621,000 acres of vineyards, 4,800 bonded wineries and nearly 6,000 winegrowers.

Over 24 million people from around the globe visit the California winegrowing regions each year.  Visit wineries across the state 40+ harvest-themed events, activities and experiences — and more will continue to be added throughout September. These include behind-the-scenes vineyard and crush pad tours, grape-stomping competitions, wine and food festivals, hands-on harvest experiences, charity wine auctions and more.

“California’s diverse and expansive wine country is one of its top tourism draws,” said Caroline Beteta, Visit California president and CEO. “From high-end pairings and legendary wineries to sustainable vineyards and neighborly barn tastings, there’s an experience — and a wine — for everyone to enjoy.”

“We say what grows together goes together,” said Cher Watte Angulo, executive director of California Grown. “Since California provides over 50% of the nation’s produce and over 80% of the wine, it makes sense that people celebrate with both a sip and a bite of the Golden State.”

Whether visiting wineries in person or online, there’s no better time than California Wine Month to pick up a few bottles of wine to share with friends and family. It’s also easy to find a great selection of California wine at your local grocery store or wine shop.

For the latest details on offerings, visit the Discover California Wines website.

The SLO Coast Wine Collective announced this week that the San Luis Obispo Coast has been recognized as the newest American Viticultural Area (AVA) by the US Alcohol and Tobacco Tax and Trade Bureau.

Previously home to four AVAs: Paso Robles, Arroyo Grande, Edna Valley and York Mountain — SLO County has not had a new region approved for 30 years, since Arroyo Grande was last awarded the title in 1990.

The new AVA is a long, narrow strip of land that runs along California’s Central Coast, is 60 miles long and 15 miles wide. Currently, there are 32 wineries, that applied for the official status in 2017, making a case for the area’s unique and regional-specific characteristics including its proximity to the Pacific Ocean.

The SLO Coast AVA also includes 78 vineyards and around 4,000 acres under vine, with Chardonnay and Pinot Noir being the most dominant plantings, alongside Albariño, Grüner Veltliner, Riesling, Grenache, Syrah, Tempranillo and Zinfandel.

“We are one of the coldest spots to grow grapes because we are so close to the Pacific Ocean,” said SLO Coast Wine president Stephen Dooley. “What makes this area interesting is the low temperatures coupled with a lot of sunlight. Cool temperatures preserve acid, and in grapes like Pinot Noir, the sun helps with pigment, colour and tannin.”