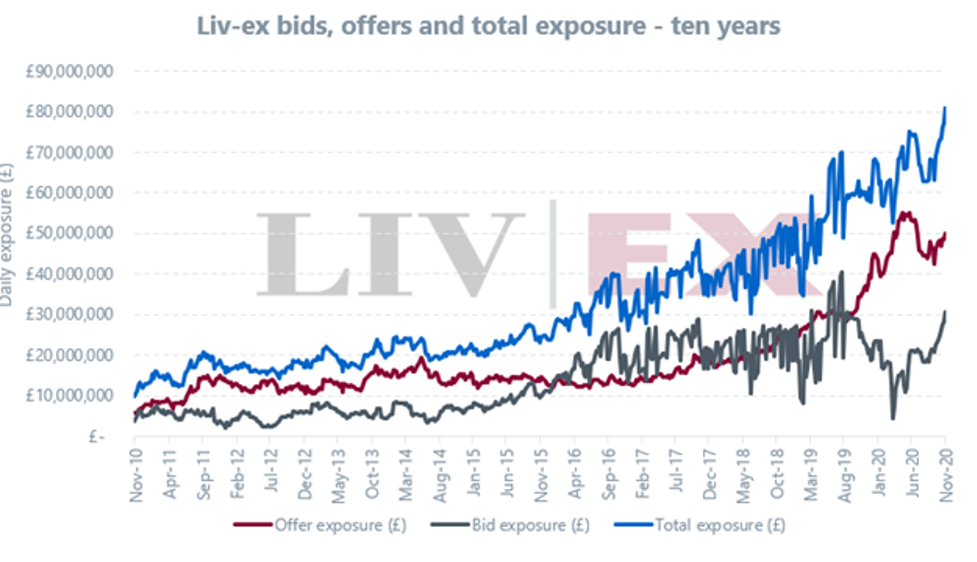 Despite the headwinds of 2020 – tariffs, Brexit uncertainty and the global pandemic – the wine market has remained robust. Today’s post examines what has changed and offers an explanation as to why we are seeing greater confidence in the market during these exceptional times.

Another noticeable difference is that more wines than ever are attracting buying interest, taking market share from the traditional strongholds of Bordeaux and Burgundy. As the chart below shows, the wine market has undergone considerable broadening in the past decade. Bordeaux’s share has halved from its peak in 2010 when it accounted for 95.7% of secondary market trade by value. As its share declined, others shined. Burgundy was the first and main benefactor; its trade share rising from 0.6% in 2010, to a record high of 19.7% in 2019. It has dipped slightly this year to 17.4%. 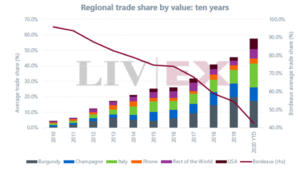 This year, Italy has been the big winner. Having reached an annual average of 8.8% in 2019, Italy now accounts for 15.3% of fine wine trade. As recently highlighted, the US wine market is also developing at unprecedented rate. USA accounted for just 0.1% of trade in 2010. Year-to-date, it stands at 7%.

So, why are we seeing such increased confidence in the wine market? One well-documented explanation is that investors are seeking to put their money into safer assets in these uncertain times. Historically, fine wine has offered steady returns and low volatility.  Another explanation is that there are simply more market participants than ever before. The number of wine businesses trading on Liv-ex has increased 15% in 2020 alone. This increase in members reflects a growing trend since the Covid-19 pandemic took hold – businesses are looking for web-based solutions to grow their sales.

One such solution is trading automation. Trading automation makes it easier for merchants to list stock for sale, exposing their diverse inventory to an ever-growing marketplace. Regions that once struggled to find a secondary market have been benefitting from the shift to online sales, particularly as lockdowns have closed much of the physical retail. Through APIs, stockholders have been able to list and advertise various wines to a far greater audience, as merchants have connected their customers to this ever-broadening market. Subsequently, wine merchants and private collectors have been able to find less well-known wines from a greater range of wine regions.

Despite an early swoon as the first lockdown took place, the fine wine market would seem to be in a relatively healthy place today. As a tangible, finite asset, it offers stability in a volatile world. It also of course offers a great deal of pleasure for imbibers who are locked down and deprived of their usual wining and dining! And importantly technology, as in so many sectors, has helped merchants from across the globe, to adapt, making wine more accessible and more exciting to all with an interest in it. Combined, these three things have put the wine market on a firm footing in 2020.

The global pandemic and high temperatures provided new challenges for Burgundy’s growers in the 2020 harvest which ended up being the earliest on record.

The eastern French region, having already experienced a mild autumn and winter in 2019, with only seven days in six months registering below 0°C, then enjoyed beautiful weather from March to September, which led to bud break three weeks earlier than average and one of the fastest starts in 25 years.

Ludivine Griveau, director and winemaker at the Hospices de Beaune, noted in her report that April saw an additional 42 hours of sunshine with temperatures up over 23°C on certain days the vines were soon “bursting with vegetation” and growers were forced to both de-bud and ‘dédoublage’ (remove shoots to reduce foliage and yield) at the same time.

This up-tempo pace in the vineyards throughout the year was further complicated, it must be remembered, by the Covid-related restrictions put in place in France, with those winemakers with young children also having to deal with home-schooling at the same time.

It would be interesting to see which aspect of the year winegrowers ultimately found more challenging.

By April 21 the 2020 cycle was already 24 days ahead of where it had been in 2019, again only the sixth time in 80 years that one vintage had been so far ahead of its predecessor.

Flowering began towards the end of April and was extremely successful. As the summer went on high temperatures and steady winds kept the crop in a largely pristine state but the lack of rainfall posed its own issues.

Luckily, despite being so mild, the end of 2019 had been wetter than normal which would prove helpful as, from March onwards, rain showers were infrequent and tended to be localized. There were instances of water deficits and resulting vine stress as well as some sunburn on bunches.

Interestingly, Griveau said that: “Wind is now an important climatic component, not only of this vintage, but also of previous vintages. In recent years, it has been quite ‘new’ to Burgundy to have this wind every day and almost all day long. If it is our ally in maintaining the perfect sanitary state of 2020, it nevertheless gives us less respite and fewer weather ‘windows’ for the application of our treatments.

“The wind also has the consequence of drying out the land, at least on the surface, making it sometimes difficult to work because it hardens [the topsoil].”

Different appellations, sometimes areas within appellations, saw staggered rates of maturity, which then meant vigneron had to be on their toes to harvest what was needed at the right time as the time approached.

Griveau said that: “We saw a noticeable variation of stages within a plot, and sometimes in Chardonnay, the phenomenon of coulure was marked, the structures of the bunches were long and airy, and the millerandage was at times not negligible. The pre-flowering conditions having been more favourable to Pinot Noir, meant it had better passed the bud burst and its berries were more regular in size. The Pinot was slightly ahead of the Chardonnay at precisely this point in the vegetative cycle.”

With the vines so far advanced (and the wasps beginning to notice) the first crop began to be gathered in on 12 August in the southern region of the Mâconnais – one of the earliest harvest starts on record and one echoed elsewhere in France as well.

Griveau authorized the harvesting of white grapes for the Hospices on 18 August and the estate’s entire crop was gathered in by August 29 – the first time in its history harvesting was finished inside of August.

The Bourgogne Interprofession (BIVB) said in a statement that the overarching tendency among the white wines was “beautiful aromatic complexity”, intense fruit but also “very good acidity” in spite of the high summer temperatures.

The reds meanwhile have very deep colour and concentration but, like the whites, “they have kept their freshness” and have a distinctly black fruit profile.

Griveau concluded: “The vinification process went perfectly for both white and red wines, and the balances that have emerged in our wines are extraordinary, and, let’s admit it, quite unexpected. The sunny side of the vintage is there, but the wines reveal an impressive aromatic freshness. Acidities are very present, and the densities are already felt. The whites have substance, without too high an alcohol content. The tannins of the reds are supple but powerful.

“The ingredients of a great vintage, which, for many reasons, is unforgettable, are all present.”

After a 12-year application process, the French National Institute of Origin and Quality (INAO) approved the classification making Pouilly–Fuissé the first appellation within Burgundy’s Mâconnais sub-region to benefit from premier cru vineyards.

It’s a new era for Pouilly-Fuissé and probably for Mâconnais, joining now the prestigious classification established a long time ago in the Côte de Beaune and Côte de Nuits. The 22 “Premier Cru” represent a total of 194 ha under vine, accounting for 24 % of Pouilly-Fuissé’s total vineyard area (800 ha exclusively located on the four villages of Chaintré, Fuissé, Solutré-Pouilly and Vergisson).

The conditions of production of the Premier Cru are: 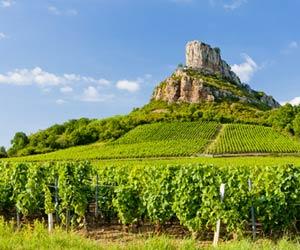 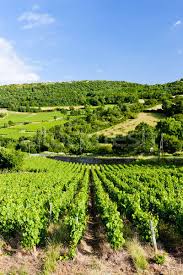 The French National Institute of Origin and Quality (INAO) has officially recognized 22 premier cru ‘climats’ within the Pouilly-Fuissé appellation.

The AOP Pouilly-Fuissé will become the first appellation within Burgundy’s Mâconnais sub-region to benefit from premier cru vineyards.

The 22 new premier crus account for a total of 194ha of land planted to vine, corresponding to circa 24% of Pouilly-Fuissé’s total vineyard area (800ha), spread over the four communes of the appellation: Chaintré, Fuissé, Solutré-Pouilly and Vergisson.

A proposal for the recognition of these climats as premier crus was first submitted to the INAO 10 years ago. Since then, the INAO has been working in partnership with the Organization for the Defense and Management (ODG) of the Pouilly-Fuissé appellation to assess the worthiness of these ‘terroirs’.