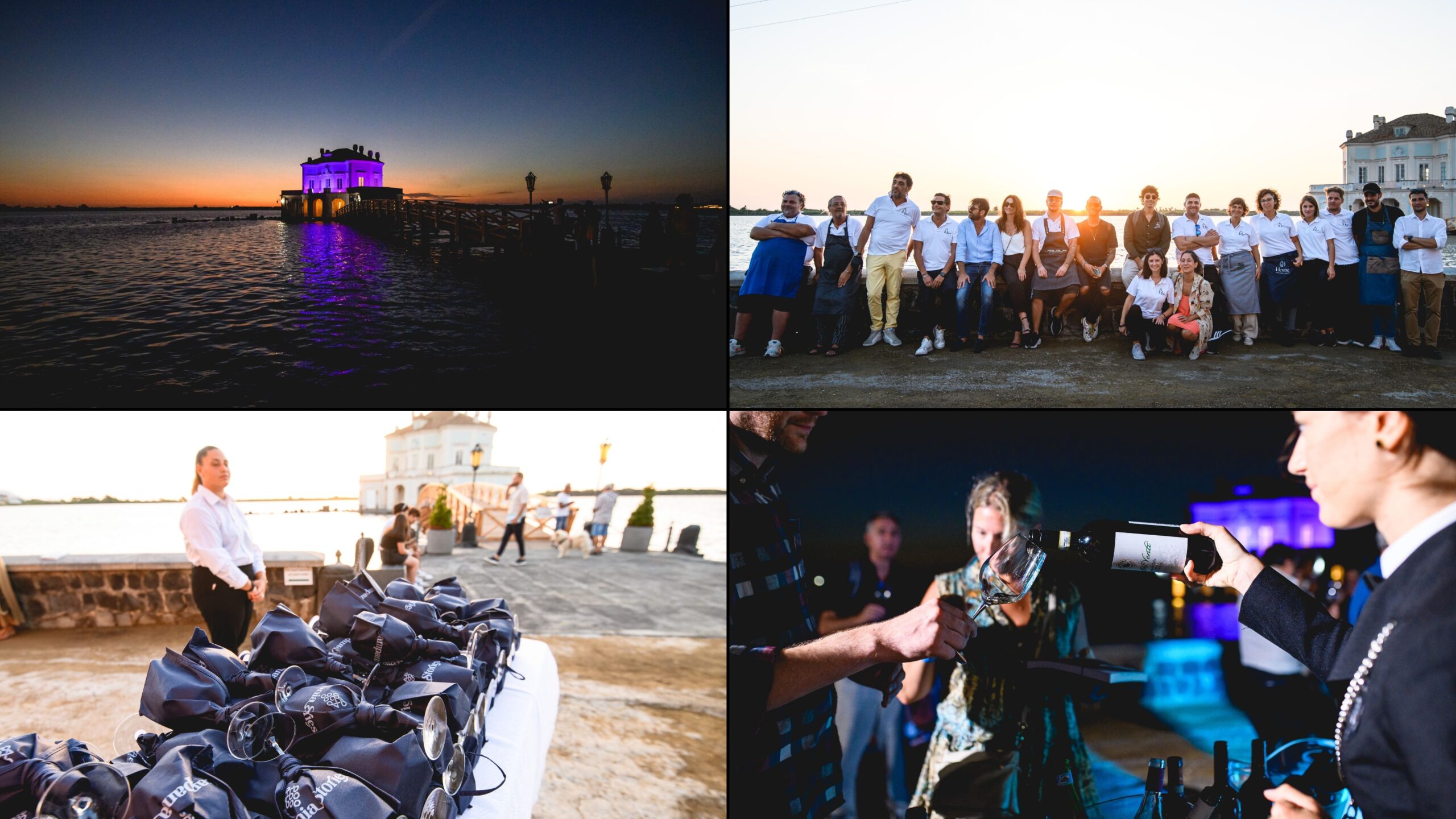 Campi Flegrei – how fire and sea shape the wines

It is not a coincidence that the ancient Romans identified a desertic area Northwest of Naples, Italy as “Hell’s Door” in the vicinity of the active volcano Vesuvio. The lunar region of Campi Flegrei is a breath-
taking place also literally because of the sulfur in the air.

This volcanic region dates back 15,000 years and it is made up of active volcanos, and thermal water springs – where the grey of the local volcanic rocks dominates.

For centuries this has been the main backdrop of legends, like the meeting of Aenea with his father; it was also described as one of the most prodigious places in the world by Goethe. He was not wrong, with its enchanting and scary landscape, Campi Flegrei overlooks the bay of Naples, the island
of Procida, the Cultural Capital and the island of Ischia, famous for its warm water springs.

Fire, water, land and air: these are the main elements of Campi Flegrei – translated as burning fields; a region that is living a renaissance lately, with special thanks to the strong network of the local consortium, producers and tourists taking key roles. July and August 2022, Campi Flegrei registered over 120,000 visitors and an increase of 15% of visitors to the area, producing an income in two months of over 1 million euros.

Campi Flegrei, with its wild beauty, was also the backdrop of the 2022 Campania Stories – Special Edition. This is a yearly wine event for press and trade professionals; an unmissable occasion to taste special vintages, and wines and meet the producers. Diana Cataldo and Massimo Iannaccone, ideators and directors of Campania Stories, did their very best with this event, not only by arranging a comprehensive wine tasting but also, with visits and tours to the producers.

The wineries are concentrated in 7 towns, including Naples, which is why, sometimes for this appellation we might talk of “Metropolitan Vineyards”, which are small estates nestled among tall buildings, but still enjoying the sea breeze from the Bay of Naples. Most of them have few pre-phylloxera plants, as the volcanic, powdery soil has preserved the European roots throughout the years.

A common thought is that Falanghina is an easy wine to drink and is to be consumed within a year of harvest, but there was a happy discovery during the blind wine tasting at Campania Stories – we tasted a 10-year-old Falanghina – the colour was deeply darker, the typical saltiness of Campi Flegrei area showed an incomparable crispness of this white. 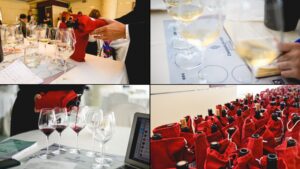 La Sibilla is one of the milestone wineries of the area, which is based in Bacoli, North of Naples. The Di Meo family has run the wine business for over five generations on an estate of 10 ha. A section of the vineyards grows in an archaeological area called Villa di Cesare. There are a few plants in their vineyards that date back to more than a century, and are still on the European roots, protected by the friable grey volcanic soil. But the gem of La Sibilla is the aging cellar, an ancient tank of tuff where the Romans
collected rainwater. A naturally cool, dark place, where old single vineyard wines from Falanghina and Piedirosso keep aging. The classic Falanghina Campi Flegrei 2021 (we tasted) was straw yellow, with a herbal bouquet recalling all the herbs growing wild in the vineyards, from sage to
mint, with a touch of lemon zest. On the palate, the wine showed agility, freshness and a long-lasting saltiness – this definitely makes Falanghina a good food wine. A lovely pairing to buffalo milk mozzarella.

Another interesting producer is Agnanum, a smaller producer, run by the Moccia’s family. Their vineyards are next to the Astroni crater, which was previously a hunting reserve of the Borbons. This vineyard tried to survive the advance of concrete which is hidden by buildings and was also challenged by hungry foxes that in harvest time are tempted by the sweet juiciness of Falanghina grapes. The Moccia’s restate is in Agnano, next to a motorway- this is one of the most astonishing places in Naples: in the downtown of such a big city, the vineyard of Piedirosso is something so unexpected! So, while Raffaele Moccia is well known for being one of the authors of the Piedirosso revival, the tasting of Falanghina Campi Flegrei 2012 was not disappointing. A 10-year-old Falanghina is a big challenge, with its deep golden brilliant colour and its intense bouquet of ripe yellow fruit but still keeping its minerality (recalling wet sand and seashells}. On the mouth, the roundness and greasy taste is well balanced by the refreshing saltiness that still keeps the wine incredibly alive. A good way to enjoy the breathtaking view of the islands in the bay.

The press tour of Campania continued with a visit to Sannio, on the northern edge of the region. A historical place, where Roman ruins are side by side to modern buildings, where a stunning aqueduct, a masterpiece of architecture, stands in the middle of the plain around Benevento.
Through the years, Benevento has arisen in popularity because of the magic: legends say that it was the homeland of witches who used to reunite around the walnut trees, grown in Sannio. It’s not a coincidence,
that one of the worldwide most famous liqueurs, from this place, is named Strega – it means “witch” in Italian and whose recipe is still a secret.

Later, the big plain between Matese and Taburno mountain was mostly converted to vine and olive growing. These crops have represented the main income of the area for years, especially in the 20th century, when Sannio was sadly considered the tank of bulk wine from the white grape Falanghina, but also, from other grapes such as Barbera, Gglianico, and Piedirosso..

The average style of Falanghina is aromatic, light-bodied, and to be easily drunk in a year. Nowadays, the big surprise is a number of different styles of Falanghina have emerged, from an easy-drinking wine to a more complex wine. You would never have said it before, but this wine is now suitable for long aging. This all came out from a comprehensive tasting of local wines. One of the main producers of the area is Terre Stregate, a historic winery, run by the Iacobucci, family, who for years, have sold their grapes to other producers, and in the nineties started to invest on their own. The new
generation of the family, Filomena and Carlo, have rejuvenated the brand image, the wine line and labels, keeping the high standard of quality in the winemaking process.

Their wine, Svelato, is one of the best-known Falanghinas in Italy, rewarded by several accolades. Svelato Falanghina del Sannio 2021 is a bright straw yellow wine, with a delicate fruity bouquet, that
recalls ripe yellow fruits with a touch of exotic ones, well blended with a herbal finish. The sip is nicely refreshing, mouth-watering, warm but with a long finish. A full-bodied wine, unexpected from a grape that people considered for years a jug wine.

The estate has over 20ha and includes Falanghina and Aglianico, as well as Barbera, Piedirosso, and some olive trees for olive oil. The most interesting red was the Aglianico del Sannio DOC Manent 2019, a deep red, as expected from any Aglianico, which stands out for fruitiness and cleanness. The wine has been aged for almost a year in both steel and oak, which gives it a smoothness and spiciness, a well-balanced wine, good to drink now or to keep for some years.