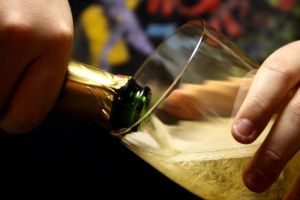 There has been a long-standing disagreement over the best way to pour a glass of champagne…the evidence is now in as of August 11, 2010! Scientists in France have recently reported that pouring champagne in an angled, down-the-side way is best for preserving its taste and bubbles. Along with this report, came the first scientific evidence confirming the importance of chilling champagne before serving to enhance its taste.

Gérard Liger-Belair and his colleagues have noted in this report that tiny bubbles are the essence of fine champagnes and sparkling wines. Past studies indicate that the bubbles (which are formed during the release of large amounts of dissolved carbon dioxide gas) help transfer the taste, aroma, and mouth-feel of champagne. Scientists long have suspected that the act of pouring a glass of bubbly could have a big impact on gas levels in champagne and its quality. Until now, however, no scientific study had been done. The scientists studied carbon dioxide loss in champagne using two different pouring methods. One involved pouring champagne straight down the middle of a glass and the other involved pouring champagne down the side of an angled glass. They found that pouring champagne down the side preserved up to twice as much of the carbon dioxide in champagne than pouring down the middle. They believe that the angled method was gentler.

Though the findings may seem obvious, this is the first time they’ve been shown chemically. As for how to best drink champagne, the answer is still the same—bottoms up!