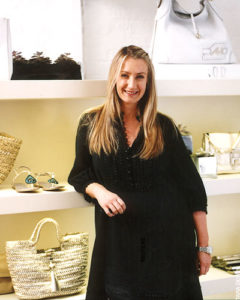 Drawing upon her natural passion for accessories and design, Anya started her business at the age of 19. Since then, she has spearheaded the business growth from her first retail outlet, an intimate first floor shop on London’s Walton Street, to fifty seven shops worldwide, including a London flagship on Sloane Street and a Tokyo flagship in Aoyama, with a New York flagship opening in the New Year.

In 2009, Anya Hindmarch was awarded an MBE in recognition of her contribution to the British fashion industry. Two years later in 2011, she became a UK Trade Ambassador as well as becoming a Non-Executive Director of the British Fashion Council. She is also a trustee of both The Royal Academy and The Design Museum and a Governor of The University of The Arts. Her support of the next generation of British entrepreneurs, most notably through the Government’s ‘Start Up Britain’ campaign was also cited by the judges as a key reason as to why she was awarded the prestigious accolade.

Anya’s commitment to be a socially responsibly business was also welcomed by the judging panel, most notably for the charity promotion, ‘Be a Bag’ project and her ability to inspire change by making it fashionable not to use plastic bags with her iconic ‘I’m Not A Plastic Bag’ campaign, launched in 2007.

Also noteworthy was her 2009 launch of Anya Hindmarch Bespoke. This launch was perfectly timed as consumers increasingly sought investment pieces that were unique, beautifully crafted and personalised. The Bespoke collection is for both men and women and allows customers to personalise their pieces with hand written messages and drawings that are embossed into the leather by Craftsman based in the Pont Street store.

“It is the greatest honour to win the Veuve Clicquot Business Woman award in its 40th year. It is a very real compliment to be deemed to share some of the qualities of Veuve Clicquot herself who was clearly a brave and pioneering woman but also to even be considered amongst my fellow finalists, Helena Morrissey and Ruthie Rogers who are both brilliant businesswomen and lovely people.” Anya Hindmarch

“We are delighted that the judges have selected a winner who fully embraces the spirit of the Award and can provide inspiration for the next generation of female entrepreneurs in the UK. In a year that British fashion has never been under the spotlight more, Anya has proven that commercial triumph alongside pursuing a responsible business is more than achievable and it is wonderful to see such a shining example of business success.” Christina Jesaitis, Senior Brand Manager, Veuve Clicquot

In addition to receiving a silver trophy shaped as a La Grande Dame bottle and a case of La Grande Dame 2004, Anya Hindmarch will take part in the Veuve Clicquot International Women of Influence Forum at the Veuve Clicquot Maison in Reims in October 2012. This event will gather previous winners from across the globe for a unique occasion to celebrate the 40th anniversary of the Award. The winner will visit the Manoir de Verzy and the House’s vineyards, where she will have a vine baptized in her name recognizing her legacy and life-long relationship with Veuve Clicquot.