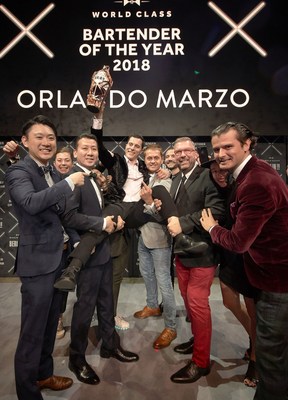 Orlando competed against over 10,000 bartenders from every corner of the globe.  The competition lasted six months, with over one hundred challenges and countless cocktails. It culminated in a four-day final, where 56 of the best bartenders in the industry battled it out in Berlin.

“Shaking it all the way to the top” was no mean feat for this bartender, his winning cocktails truly blew the judges away. Diageo Global Cocktailian and WORLD CLASS judge, Lauren Mote, said: “All the finalists brought their A game, but Orlando really was on another level. The Zacapa aperitif he made for the ‘Before and After’ challenge was one of the best I’ve ever tasted and the way he held his nerve in the ‘Cocktail Clash’ finale – for me, that’s the mark of a truly WORLD CLASS bartender.”

The standard this year was truly exceptional, but Orlando stood out as the best of the best. Armed with Diageo’s award-winning Reserve brands, he blew the judges away, taking sustainable bartending further than ever before in the Ketel One ‘Better Drinking’ challenge, and reigning supreme in the ‘Flavours of a Nation’ round with his innovative twist on the classic Johnnie Walker Black Label Highball. To seal the deal, he went head-to-head with his fellow competitors in the ‘Cocktail Clash’ Grand Finale and brought the house down with one show-stopping creation after another.

Orlando has an incredible year ahead of him – he will have the chance to travel the world as a Diageo representative, making bespoke drinks in exotic and far-flung locations and judging competitions. He will also join a roll call of the industry’s finest, becoming the 10th member of the WORLD CLASS Hall of Fame.

“I can’t believe it!” said Orlando. “Just being here, competing alongside the best bartenders in the world, judged by some of the most iconic names in the business was a once-in-a-lifetime opportunity, but to actually win? I’m still in shock. I couldn’t have done it without the support of my amazing team back home – they’ve cheered me on every step of the way!”

Here is where you can find winning recipes from this year’s finalists: