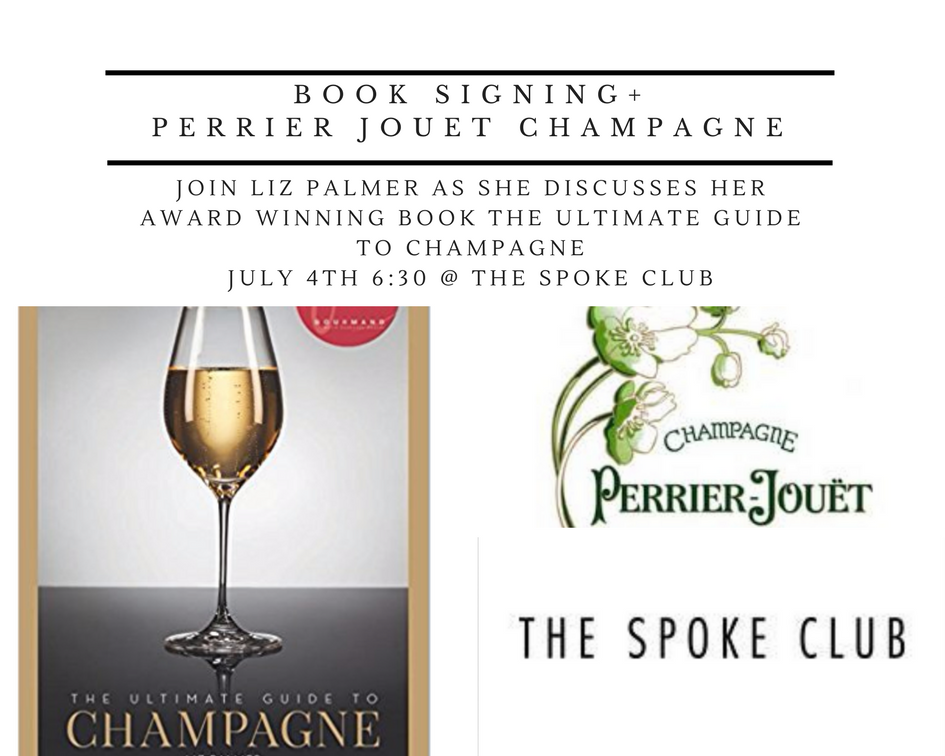 You are invited to a very special event on the rooftop of one of the most coveted private members’ club’s in Toronto, The Spoke Club!
The soiree will be all about champagne. While sipping your first glass of Perrier-Jouet, and enjoying the stunning views, the Award Winning Liz Palmer, author of The Ultimate Guide to Champagne, will talk about champagne and take questions on everything you always wanted to know on the topic! Liz will also take time to sign her book, which is a perfect gift for all champagne lovers. You can pre-purchase a copy of The Ultimate Guide to Champagne through Eventbrite or purchase it at the event. [*special event price]

Discounted prices on Perrier-Jouet throughout the evening.


You will be welcomed with a complimentary glass of Perrier-Jouët Champagne. Raffle Prizes, discounted champagne ($18 per glass and $100 per bottle) and exclusive access to The Spoke Club Rooftop ***
Dear members,

***************
Since 2004, Liz Palmer has been a highly acclaimed wine journalist with an international reputation as a critic and judge.
She has had the pleasure of interviewing, and done tastings, with some of the industry’s leading winemakers, professors and personalities.
Her articles have appeared in national and international magazines. Liz is one of four founding international hosts for #ChampagneDay 2011-2017.She has also served as a judge for the 2013-2017 Global Traveler’s Wines on Wing Airlines Wine Competition (New York); 2014-2017 Michelangelo International Wine Awards (South Africa); and, The Stevie Awards for Women in Business, New York,2014-2017.
Her memberships include: Wine Writers’ Circle of Canada, Circle of Wine Writers (UK), International Federation of Wine and Spirits Journalists and Writers (FIJEV); Wine Century Club (NYC); and, The Fine Wine Reserve.

2017 Awards:
Liz Palmer’s first book, The Ultimate Guide To Champagne received the National Award as the best French Wine Book at the Gourmand World Awards 2017 and was accepted for the 2017 Taste Canada Awards [Culinary Narratives Category] with winners to be announced in October. On April 7th, 2017, she was awarded the title of“Dame Chevalier” of the Ordre de Coteaux deChampagne at an official ceremony in Paris.
the ultimate guide to champagne liz palmer.

*********************
The guest list will be strictly enforced. Due to limited capacity on the rooftop, we expect tickets for the event to be sold very quickly. So, secure your ticket(s) early.
Cash Bar – Dress code: Simply Chic – In case of rain, the event will take place inside.
Refund policy: Tickets are refundable up to 72h hours prior the event.