Liz Palmer and her Team

Based in Toronto, Canada, we specialize in providing corporate exclusive Champagne and Cognac learning experiences. These are the first of its kind in Canada, and have been specially designed for the corporate sector. 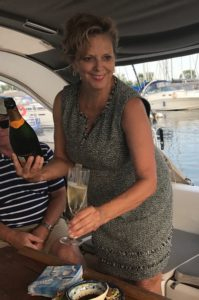 Liz Palmer is a well-respected award-winning author and wine journalist since 2004 and has an international reputation as a critic and judge. Liz has had the pleasure of interviewing and tasting with some of the industry’s leading winemakers, professors and personalities.

Liz’s articles have appeared in national and international magazines. She is one of four founding international hosts for #ChampagneDay 2011-2019; she has served as a judge for the Global Traveler's Wines on the Wing airline wine competition (New York) 2013-2019; Michelangelo International Wine Awards (South Africa) 2014-2019; and for The Stevie Awards for Women in Business (New York) (2014-2018).

2017 Awards:
Liz Palmer’s first book, “The Ultimate Guide to Champagne” has received the National Award for the best French Wine Book at the Gourmand World Awards 2017; The 2017 USA Best Book Awards: "Winner" in the "Best Interior Design" category and "Finalist" in the "Travel: Guides & Essays" category.

On April 7th, 2017 Ms Palmer was awarded the title of “Dame Chevalier” of the Ordre de Coteaux de Champagne at an official ceremony in Paris. Ms. Palmer’s website: www.liz-palmer.com was named as one of the "Top Champagne Websites" on the web.

2018 Achievements
Awarded a spot as one of the “Top 20 Global Wine Influencers” by Social Vignerons.