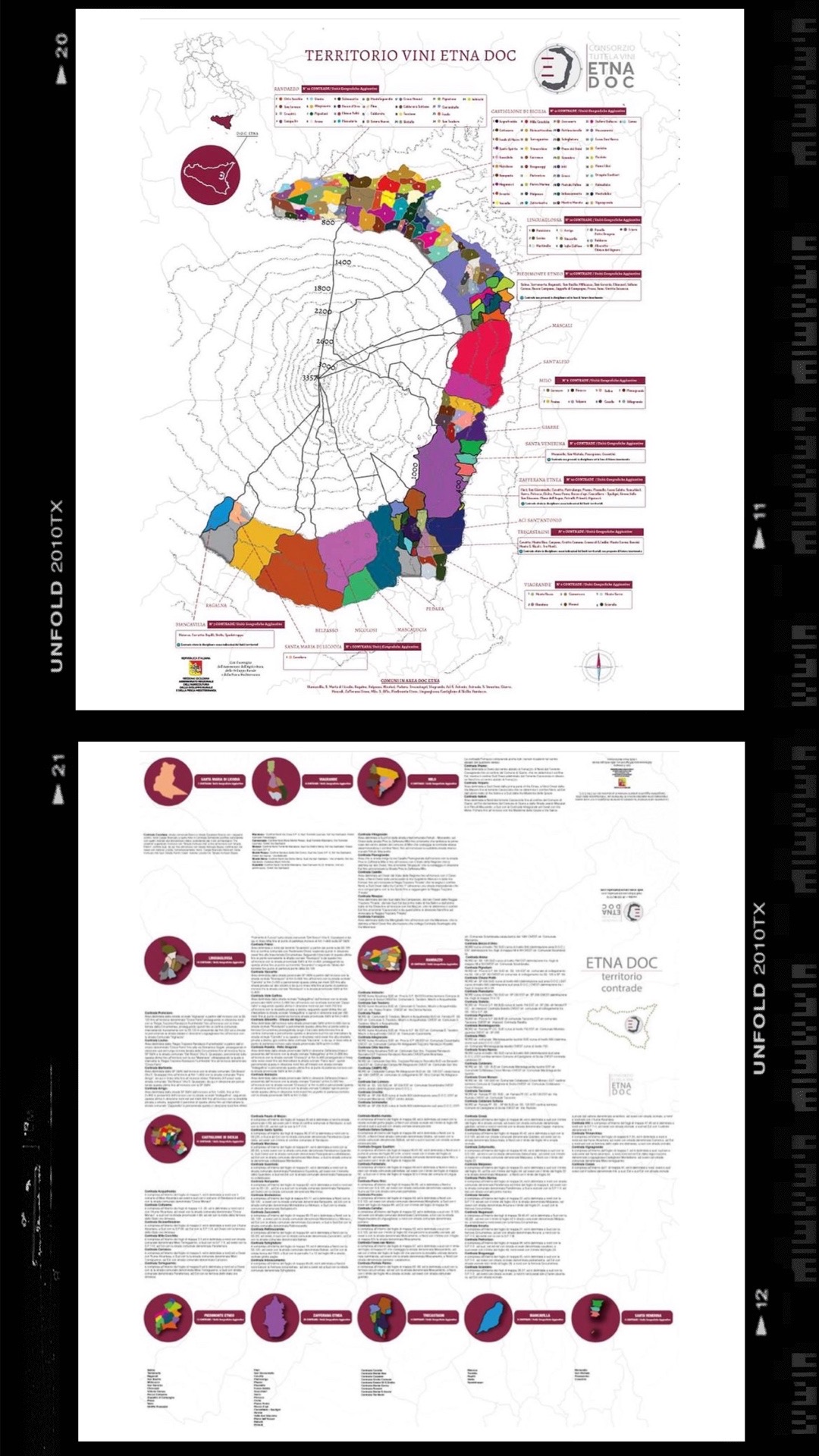 The process has been long and meticulous.  The map clearly defines and identify the borders and the exact position of the Contradas within the Etna DOC production area. It was prepared by the Consorzio Tutela Vini Etna DOC with contribution by the Agriculture Department of the Department of Agriculture of the Sicilian Region.

The identification of the districts has been previously based on the interpretation of old cadastral maps with no updates to level curves, and continuous eruptive activity of Etna. The new map was created starting from recent topographic surveys which were then superimposed on cartographic layers constructed through multiple surveys with GIS (Geographic Information System) instruments.

“This is a demanding job that has finally come to an end and which represents only the first step in an even more complex project of studying the Etna area” comments Francesco Cambria, President of the Consorzio Tutela Vini Etna DOC. “Never had a study of this type been done.

The goal was to clarify the exact boundaries of the 133 Contrade dell’Etna within the production disciplinary and to identify the new ones that will be officially introduced in the coming months.

The incredible biodiversity that Etna preserves, in fact, is expressed not only within the different slopes of the volcano where our viticulture is present, but also in the many Contradas starting from the different stratifications of the lava flows and the exposure of the vineyards. . All factors that make each Contrada almost unique within the Etna area, capable of giving different nuances to its wines “.

The Production Disciplinary of the Etna Controlled Designation of Origin, the oldest present in Sicily born in 1968, recognizes from 2011 within its area, which extends over the territory of 20 municipalities, the presence of 133 districts, legally equivalent to Additional Geographical Units. In the long work of reconnaissance of the territory, the updating of the borders has led to the identification of 9 new districts, thanks to the collaboration of the producers belonging to the Consortium, which will be officially included in the next update of the production specification. The new Map of the Contrade also takes into consideration the latter, reaching the number of 142 Contradas, divided into the territory of 11 municipalities: 25 in Randazzo, 41 in Castiglione di Sicilia, 10 in Linguaglossa, 13 in Piedimonte Etneo, 8 in Milo, 4 in Santa Venerina, 20 in Zafferana Etnea, 9 in Trecastagni, 6 in Viagrande, 1 in Santa Maria di Licodia, 5 in Biancavilla.