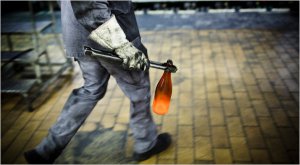 Deep below a lush landscape of ripening Champagne grapes, Thierry Gasco, the master vintner for Pommery, ran his finger over the shoulders of a dark green bottle that looked just like the thousands of others reposing in his chilly subterranean cellars.

But to the practiced hand and eye, there is a subtle, if potentially significant, difference.
“This is how we’re remaking the future of Champagne,” he said, pointing to the area just below the neck. “We’re slimming the shoulders to make the bottle lighter, so our carbon footprint will be reduced to help keep Champagne here for future generations.”

The Champagne industry has embarked on a drive to cut the 200,000 metric tons of carbon dioxide it emits every year transporting billions of tiny bubbles around the world. Producing and shipping accounts for nearly a third of Champagne’s carbon emissions, with the hefty bottle the biggest offender.

Yet while many other industries might plaster their marketing with eco-friendly claims, changes to Champagne, as with so much else in France, are being made discreetly. Producers in this secretive business are tight-lipped about the costs and occasionally enigmatic about how much their carbon emissions will really be cut.

“Champagne is sometimes more humble than it should be,” said Philippe Wibrotte of the Comité Interprofessionnel du Vin de Champagne, the region’s trade organization. “Much is done for the promotion of the environment, but it’s kept quiet because we want to make sure each step is perfect.”

The industry speaks in hushed tones, too, in deference to the luxurious image and ritualistic traditions of Champagne, as symbolized for centuries by the bottle. It was Dom Pérignon, a Benedictine monk, who first thickened the glass in the mid-1600s to contain what was often referred to as “the devil’s wine” because its vessels exploded so often. Over time, the bottle was gradually recalibrated until 900 grams, or about two pounds, became the standard weight in the early 1970s.

The move comes as efforts to reduce carbon output and improve vineyard ecology are accelerating worldwide, as wine houses reduce packaging, pesticides, water use and transportation. In California, for example, winegrowers are promoting what their trade group, the Wine Institute, says are nearly 230 “green practices,” including methods to cut carbon emissions.

Champagne accounts for only 10 percent of the three billion bottles of sparkling wine produced globally each year. But the bottle stands out for its heft. Italian prosecco, for instance, uses a 750-gram bottle. But it and its various fizzy cousins have only about half the pressure of Champagne — which generates three times the air pressure of a typical car tire.

Although some of Pommery’s restyled bottles are already on the market, the C.I.V.C. expects all Champagne houses to start using the new 835-gram vessel next April for bottling this month’s grape harvest; the new wave of bottles will hit stores after three years of fermentation. The effort, the group says, will trim carbon emissions by 8,000 metric tons annually — the equivalent of taking 4,000 small cars off the road.

“For Champagne producers to reduce the weight of their packaging is definitely a step in the right direction,” said Tyler Colman, an author of environmental studies on the wine industry, “because there’s less mass to transport around the world.”

Vranken-Pommery Monopole, which in addition to Pommery owns Heidsieck & Company Monopole and other labels, got a head start by adopting the lighter bottle in 2003. Consumers around the world may have already uncorked some specimens without noticing the new bottle. Moët & Chandon, Veuve Cliquot and a few others quietly switched this year, with those bottles still under fermentation.

The rest of the Champagne producers are deciding whether to embrace the C.I.V.C.’s mandate, which is voluntary but carries special force in this clannish community.

Designing a new bottle was no small feat. The container still had to withstand Champagne’s extreme pressure. It would also need to survive the four-year obstacle course from the factory floor to the cellars to the dining table, and fit in existing machinery at all Champagne houses. And it had to be molded so that consumers would barely detect the difference in the bottle’s classic shape.

“The bottle is part of Champagne’s image, and we don’t want to affect it,” said Daniel Lorson, a spokesman for the trade group.

Mr. Gasco said Vranken Pommery, one of the largest houses, has spent 500,000 to one million euros ($635,000 to about $1.3 million) each year since 1994 on environmental initiatives, including research and testing of the lighter bottle.

But the bottle, he said, is not about money, which has become tighter since the financial crisis. Industrywide sales for Champagne last year were 3.7 billion euros ($4.7 billion), down from nearly 5 billion euros in 2007.

“Reducing their carbon footprint and energy use is also a great way to make their operations more financially viable, especially with the economy the way it is,” said Euan Murray, an official at the Carbon Trust, a nonprofit group that advises businesses and government on global warming issues.

Sipping a glass of Pommery during an interview, Mr. Gasco eventually disclosed that the new bottles cost around 32 euro cents (41 United States cents) each, not much cheaper than the classic. But Mr. Gasco, who sits on the C.I.V.C.’s bottling panel, said “if everyone starts to use it, the price will come down.” Any savings, however, would be too slight to pass on to consumers, he said.

Most of the new Champagne bottles are made at the St. Gobain plant near here, where molten red glass is dropped from a 20-foot-high chute into molds at a rate of 160 a minute. The glass is cooled from more than 1,000 degrees Celsius for over an hour, scanned for imperfections and stacked on pallets for shipping.

A worker on Pommery’s assembly line, who declined to be named, said he noticed that a few more of the new bottles were exploding, and that they made a higher-pitched sound when they clinked together. Mr. Gasco denied there were more explosions, and said any damage more likely came from using heat to inject the cork.

Bruno Delhorbe, the director at the St. Gobain factory, said that using less glass lowered the carbon emissions necessary to make each bottle by 7 percent, and allowed about 2,400 more to be placed inside delivery trucks, reducing the number of trucks on the road.

Slimming the shoulders while thinning the glass, he noted, also allowed his clients to avoid giving their customers more Champagne for the same price.

Of course, there are even lighter alternatives: Many of the world’s producers of still wines are employing plastic bottles and box containers to reduce their carbon footprint.

But it may be a long time before Champagne goes that route. Most houses take pains to cultivate an image of luxury through packaging and pricing — and intimations that other sparkling wines are inferior because they simply are not Champagne.

Still, many producers insist that while tradition has its place, the environmentally motivated changes are about the future. Patrick LeBrun, an independent producer, said he started going green “for personal reasons.” He has not used herbicides for five years, and this year, he is putting all of his product into the lighter bottle.

“There’s about a 2-cent price difference but that’s not what decided me,” he said. Trying to improve the environment “is my contribution to the next generation.”