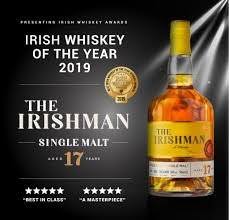 The Irish whiskey industry celebrated the 2019 Irish Whiskey Awards a few weeks ago.

The biggest winner, taking the overall prize for Best Irish Whiskey of the Year, was The Irishman 17-year-old. Though The Irishman offers a number of expressions, the 17-year-old ages the longest; a single malt that spends 17 years in a single Sherry cask. This whiskey also claimed the top prize for the Best Irish Single Cask Whiskey.

Awards were handed out in 19 categories, which included one winner and two gold medal runners up in each category.  The event also named the best Irish whiskey bars for all four Irish provinces.

The winner for Best Irish Whiskey Bar of the Year (International) is a name any American fan of Irish whiskey is sure to recognize New York City’s The Dead Rabbit.