Armand de Brignac has released the largest bottle of luxury Champagne: “Midas”, a massive 30-liter vessel (equivalent to 40 regular-sized 750ml bottles) and weighing in at 100 pounds. The name “Midas comes” from King Midas (Greek mythology – having the ability to turn whatever he touched to gold).

The first Midas bottle of Armand de Brignac was sold in 2010 for $100,000 at the famous nightclub XS in Las Vegas’ Encore Casino – part of Steve Wynn’s Wynn Hotels group. There, nationally recognized mixed martial arts and UFC heavyweight champion Cain Velasquez hosted his UFC 125 after-party joined by fighters Gilbert Melendez, Urijah Faber, Jake Shields, and UFC announcer Bruce Buffer. Two strongmen were needed to carry the bottle to the table of the anonymous high-roller who made the purchase.

Each metallic bottle, inspired by famed fashion designer Andre Courreges, is crafted entirely by hand; each bears two Ace of Spades insignias and four hand-applied pewter labels. The striking bottle is housed in a black wooden case embossed with the Champagne’s royal crest. The box is lined with velvet and fitted with an engraved nameplate, reflecting the splendor and grand style of the French fashion world and perfectly complementing the Armand de Brignac Champagne within. 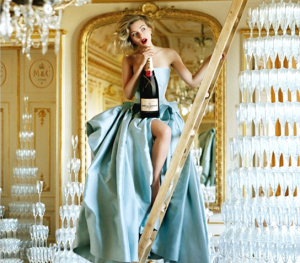 Scarlett Johannsson has been the face of Moet & Chandon Champagne since 2009. The latest campaign just arrived in time for the Hollywood awards season to kick into high gear with Sunday night’s Golden Globes.

“This new campaign highlights a return to the immutable elegance and glamour that are inherent to both Moet and Scarlett,” says Daniel Lalonde, Moet & Chandon’s President.

So … which do you prefer? Great Bordeaux or bulk crude oil? The answer depends on your perspective, I think. For drinking there is no choice — red wine trumps black gold. No doubt about it. Demand and Supply Always Apply But how about if you look at the choice from an investment perspective? The surprising answer is that it makes little difference. The prices of fine wine and crude oil have been highly correlated in recent years.  Or at least … Read More

via The Wine Economist 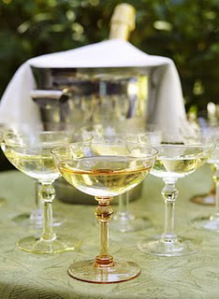 Is for you to have